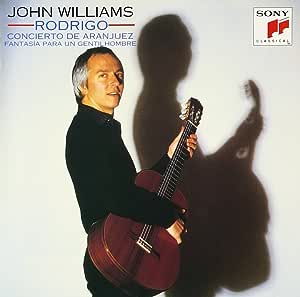 ap shift
5つ星のうち1.0 Is this CD genuine?
2019年11月8日に英国でレビュー済み
Amazonで購入
I was very disappointed when I received this CD to find that it was an illegal bootleg. The audio quality was poor and now I have acquired a genuine copy issued by Sony Classics in 2004 I realise just how bad. The art work of the bootleg is cut and pasted from this release.

Amazon have today confirmed they are refunding my purchase and postal costs both ways. They haven't commented on being made aware of a bootleg CD for sale on their site. I saw a report on line that the R.I.A.A. purchased 150 CDs on sale on line and around 40 were fakes! Buyers beware!

The audio quality of this Sony release is much better than a CD released by EMI in the eighties. Digital improved a lot in '90s.
The Warners disc has an additional track of Rodrigo's Fantasia para un gentilhombre again with John Williams Barenboim recorded in 1967. A better buy all round.
What did the Romans say? " Caveat emptor" .. buyer beware!
続きを読む
役に立った
フィードバックを送信中...
フィードバックをお寄せいただきありがとうございます。
申し訳ありませんが、お客様の投票の記録に失敗しました。もう一度試してください。
違反を報告
レビュー を日本語に翻訳する

The remastering, presumably from the original session tapes, seems to have been done well, though we are not informed as to when, by whom, or with what equipment the task was accomplished. Nor are we told where, when, or exactly how the original recording was made. Such details, though quite common today on classical releases, were less often revealed back in the 1970s.

The above observation leads me to a quibble about the way this CD is marked: in a banner across the upper right corner of the insert's front cover the word "Digital" is written twice, along with the CBS logo. But this is not an originally digital recording, for in the lower left corner it says "Digitally Mastered Analog Recording." (What the upper right corner giveth, the lower left taketh away!) Now, it's true that this IS a digital product, but as all CDs are digital it's quite redundant to label the disk so. Of more significance is the technology employed in the original recording, about which we are only informed here in small print in the lower left corner. I'm happy to say that today most CD manufacturers label their disks as digital only when they are originally recorded via digital means, and indeed most now use the 3-letter SPARS code to indicate the technologies used in (1) the original recording, (2) the mixing and editing, and (3) the mastering. Too bad CBS didn't do that here, though most savvy CD buyers will figure it out anyway, given the original recording or copyright date. (Digital recording didn't arrive until around 1980.)

Regarding the Villa-Lobos concerto, I should perhaps point out that the work is in 3 movements, though only 2 tracks are allotted. The reason for this is that the second and third movements are linked together by an elaborate cadenza to form one continuous stream of music.

To summarize, this is a fine analog recording of two excellent guitar concertos, well performed by top-notch artists. Though some may prefer other renditions, there is really nothing lacking on this somewhat brief disk, and I rate it at 5 stars. (I ought to confess though that my own favorite recordings of these works are Pepe Romero's [digital] rendition of the Rodrigo concerto and Julian Bream's rendition of the Villa-Lobos work.)
続きを読む
12人のお客様がこれが役に立ったと考えています
役に立った
フィードバックを送信中...
フィードバックをお寄せいただきありがとうございます。
申し訳ありませんが、お客様の投票の記録に失敗しました。もう一度試してください。
違反を報告
レビュー を日本語に翻訳する

Jorja A.
5つ星のうち1.0 John Williams Rodrigo Concerto
2019年9月5日にアメリカ合衆国でレビュー済み
Amazonで購入
This was a gift introducing John Williams' talent to a person who thought that John Williams was the American composer...the CD proved to be unplayable, maybe because all the audio equipment nowadays is too advanced for an old CD...disappointing..the classical guitarist John Williams (Australian) phenomenal guitarist...obviously no star rating but punched one star as could not submit rating without punching a star
続きを読む
役に立った
フィードバックを送信中...
フィードバックをお寄せいただきありがとうございます。
申し訳ありませんが、お客様の投票の記録に失敗しました。もう一度試してください。
違反を報告
レビュー を日本語に翻訳する

Ippy
5つ星のうち1.0 BEWARE
2017年5月14日にアメリカ合衆国でレビュー済み
Amazonで購入
Unplayable. Unless you have a machine almost no one has or has heard of: a super audio cd player.
Amazon does not make this clear; unfortunately I am unable to return this $30 some dollar item because I am past the sellers deadline for returns. . I am sure the music is amazing; wish I could find someone I could give it to.
続きを読む
役に立った
フィードバックを送信中...
フィードバックをお寄せいただきありがとうございます。
申し訳ありませんが、お客様の投票の記録に失敗しました。もう一度試してください。
違反を報告
レビュー を日本語に翻訳する