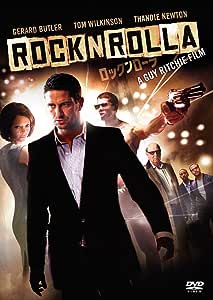 I have to say that I didn't enjoy this as much as 'Lock, Stock.....' especially considering that the film also includes two exceptional British actors, Mark Strong and Tom Wilkinson, but I give it 5 stars because most people will like it except for the Ritchie haters. There is sex but it's not shown, there is violence but it's not shown, so much happens off-camera I wonder what fills the screen and I've just watched the film.
The other thing of note : the Russian billionaire in the film looks like Chelsea F.C. owner Roman Abramovich, he has a yacht on the Thames also like Abramovich, he conducts his business affairs in a football stadium like Abramovich (though here at Wembley Stadium not Stamford Bridge) ---- what are you telling us, Ritchie ?
The film is typically Guy Ritchie - slick, entertaining, well sketched characters (but not deeply defined, I felt that I hardly knew them) but I don't think very realistic and has an engaging plot which makes you want to know how the thing pans out so you stick with it.

English subtitles, a director's commentary, deleted scenes, a feature on Ritchie's facination with London and its evolution. Oh well, onward to 'Snatch' to see if that's any better as other reviewers have hinted. I know 'Revolver' isn't.
続きを読む
3人のお客様がこれが役に立ったと考えています
違反を報告
レビュー を日本語に翻訳する

Darth Maciek
5つ星のうち3.0 Well, there is lock, half of the stock, but not really smoking barrels... not even one
2013年11月23日に英国でレビュー済み
Amazonで購入
After watching and adoring "Lock, stock and two smoking barrels" and "Snatch", I had high hopes for this film, especially considering the cast - but I was ultimately a little bit disappointed. Below, more of my impressions, with some limited SPOILERS.

I will not say much about the story, it is for you to discover, but this is another Guy Ritchie British gangster film, so you can expect to find a mob boss (played here by Tom Wilkinson), a femme fatale (played here by Thandie Newton) and three small time crooks somehow overwhelmed by the stuff they got themselves into (played here by Gerald Butler, Idris Elba and Tom Hardy), as well as some other colorfoul characters.

There is some humour, as the director attempted to repeat the success of his earlier British gangster films, but this movie is really significantly less funny than the two previously mentioned masterpieces. Also, some characters are simply impossibly annoying, like Johny Quid, the prodigal son of the mob boss (and also terminal junkie).

Some dead bodies will drop, people will get double-crossed, there will be some robberies, sex, Russian gangsters, an appearance of the Old Bill, etc. - but somehow all this doesn't work as it should. Also, a part of the plot is in fact simply copy pasted from "Layer Cake" - and that really wasn't necessary... Finally, some things are not definitely explained at the end of the film (it concerns mostly Thandie Newton's character), as if it has been poorly edited and some important scenes were removed by mistake. And I absolutely hate when it happens.

So, notwithstanding good actors and some good moments (especially two really hilarious robberies), this film is definitely a lesser thing than previous British gangster movies by Guy Ritchie. Watchable of course, but do not get your hopes too high.
続きを読む
5人のお客様がこれが役に立ったと考えています
違反を報告
レビュー を日本語に翻訳する

Mrs. Hatter
5つ星のうち4.0 Standard Ritchie
2018年12月8日に英国でレビュー済み
Amazonで購入
OK, it' not a patch on Snatch and perhaps there is just one smoking barrel here without the lock and stock, but it's a decent film none the less with pretty much everything you would expect from a typical Guy Ritchie gangsta film - London, criminals, sex and violence all tied together with far-fetched to-cool-for-school plots and characters, comedy/one-liners and a great soundtrack.

If you like his other films in this style you'll enjoy it, just maybe not quite as much some previous efforts.
続きを読む
違反を報告
レビュー を日本語に翻訳する

Gary Potts
5つ星のうち4.0 The dark underbelly of London as shown by the film makers.
2020年3月5日に英国でレビュー済み
Amazonで購入
It shows areas of the Capital that you may have thought you knew in new ways. It is not all gangsters or gloom, there is an undercurrent of humour which lifts the over all impression of the film. The extras including how the film was made is also interesting.
続きを読む
違反を報告
レビュー を日本語に翻訳する

Charles Vasey
5つ星のうち3.0 Let's All Go Up The Strand
2009年2月18日に英国でレビュー済み
Amazonで購入
This is a light-hearted (trans: unrealistic) tale of London criminal skullduggery during a property boom (whatever one of those was). It opens with a CASINO like sequence describing how money can be made and lost where crooked councillors fix planning permission. But thereafter it rolls into a tragi-comedy of errors with overly wordy repartee. Occasionally violence penetrates the jolly atmosphere but usually in a cartoonish way (the Russian/Chechen heavies in the chase scene), a possible exception being a Joe Peschi pencil job on the bouncer. All the characters are unpleasant and it is hard to care who comes out on top. The actor playing the Russian oligarch has a strange resemblance to...... someone else.