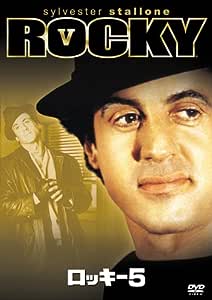 Vince
5つ星のうち5.0 Severely underrated
2010年12月7日に英国でレビュー済み
Amazonで購入
I have to start by saying this movie is really really underrated and people did not quite realise what they were seeing when it first came out.

By the time Rcoky 4 came out in 86, people had grown used to the formula, which was "Rocky trains, Rocky beats big bad opponent in the RING". Many had grown to love this franchise and I sure did do.
Rocky is my fav saga and it really is inspiring.

When part 5 came out, people were expecting the same formula and when they didnt get it, they instantly reacted negatively and labelled Rocky 5 a bad movie, worst of the lot. But that's where they made the mistake. You dont judge a movie by whether it follows the same formula as the previous ones.
You judge it solely by the story itself and whetehr the movie can stand alone, even without the previous ones.

In my opinion, Rocky 5 certainly can stand alone and is a terrific movie. One doesnt have to have watched the previous Rockys to enjoy Rocky 5. The story is solid.

I watched Rocky 5 when it came out on vhs in 92 and boy.....did I love this movie. I was really moved by the story of Rocky going broke and losing all he had achieved and how he fights his way back. The betrayal by Tommy made it all the more powerful.

The scene with Mickey in the gym certainly ranks alongside the greatest scenes in movie history. It was original, moving and very very inspiring. Bill contis musical score here made it really special too.
The final street fight in my opinion beats the the other Rocky fights. It was very well choreographed by a talented Stallone who also choreographed all the other fights.

Now come on, let's admit it, almost no other action movie can beat the Rocky 5 street fight. Even the people who hate part 5 admit its a classic street fight.

I told my friend who hated Rocky 5 when he saw it aged 12 to watch it recently and he will get a different view of it because now he's older and more mature. Sure enough, he did enjoy much more and told me he missed seeing the solid story the first time around because back then, like everyone else, he expected another formulaic "Rocky beats massive hulk in the ring" story.

So i urge the people who hate Rocky 5 and have never seen it since 92-94 to watch it again now that they are older. Im sure they will realise what a classic it really is.

I myself love this movie dearly and it's my second fav Rocky. My fav Rocky in order

So remember, you dont judge a movie based on whether it follows the same formula or not. You judge it solely by the story, the directing and acting and whether it can stand "alone" without the need for the previous installments. If it can then it's a terrific movie and in my opinion, Rocky 5 certainly is one of them.

As a matter of fact, I'm also a huge collector of action figures and i just recently bought The Rocky 5 set from amazon. Rocky 5 is an unrecognised classic and I urge people to see it now and see what they missed the first time around.

BITW91
5つ星のうち5.0 "Rocky V"
2015年7月13日に英国でレビュー済み
Amazonで購入
All movies have sequels which don't quite match the previous set of sequels, but Rocky V to me is one of my favourite movies of all time. I think the only thing that we don't see is Rocky versus Tommy Gunn in the ring, but the street fight they get into at the end was just as brutal and entertaining.
続きを読む
1人のお客様がこれが役に立ったと考えています
違反を報告
レビュー を日本語に翻訳する

Amreek Singh
5つ星のうち5.0 ROCKY'S FINAL PUNCH.
2012年11月18日に英国でレビュー済み
Amazonで購入
Well, they finally made the Rocky 5 movie of STALLONE saying goodbye to his glory days. I guess he got punched too hard on the face by MR.T and DOLPH LUNDGREN, who weren't pretty bad boxers if I say so myself. ROCKY inspired everyone to be the best at what they're good at and never quit no matter what. He'll always be the best fighter with a heart of gold and nobody can take that away from him. KEEP UP THE WINNING SPIRIT ROCKO!!!
続きを読む
1人のお客様がこれが役に立ったと考えています
違反を報告
レビュー を日本語に翻訳する
すべてのレビューを参照します
Amazonプライム会員ならお急ぎ便、日時指定便が使い放題
さらに、映画もTV番組も見放題。200万曲が聴き放題 。クラウドに好きなだけ写真も保存可能。
> プライムを無料で試す