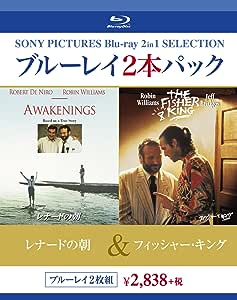 G.Manton
5つ星のうち5.0 No Dope!
2017年1月1日に英国でレビュー済み
Amazonで購入
Brilliant! No other word for it. What makes this movie is the fact it actually happened for real. Not only does it prove that miracles can happen but that two of Hollywood's finest actors Robin Williams and Robert De Nero can give an outstanding performance. This movie will certainly make you think and will pull on those heartstrings and quite rightly so!
続きを読む
9人のお客様がこれが役に立ったと考えています
役に立った
フィードバックを送信中...
フィードバックをお寄せいただきありがとうございます。
申し訳ありませんが、お客様の投票の記録に失敗しました。もう一度試してください。
違反を報告
レビュー を日本語に翻訳する

Patsy
5つ星のうち5.0 Brilliant
2019年1月27日に英国でレビュー済み
Amazonで購入
Great movie saw it a few years ago and decided to buy the DVD. It is supposed to be based on a true story. It's about a brilliant doctor (Williams) who discovers a drug which brings people out of comatose or locked in syndrome. It also tells of a delightful young boy who slowly loses all his abilities and ends up catatonic in his teens. He is now in his 30s (DeNiro), institutionalised when a new young doctor starts working with him. He gets wide spread criticisms for this contraversal experiments. However, which seems to be working well, then things seems to start going wrong.
続きを読む
2人のお客様がこれが役に立ったと考えています
役に立った
フィードバックを送信中...
フィードバックをお寄せいただきありがとうございます。
申し訳ありませんが、お客様の投票の記録に失敗しました。もう一度試してください。
違反を報告
レビュー を日本語に翻訳する

Mrs W.
5つ星のうち5.0 Must buy
2017年3月12日に英国でレビュー済み
Amazonで購入
Amazing film, brilliant acting. Must see. I've watched it several times and it still moves me every time. About a Dr trying to treat patients with locked in syndrome. Robin Williams at his best but not how we usually see him. Please buy!
続きを読む
8人のお客様がこれが役に立ったと考えています
役に立った
フィードバックを送信中...
フィードバックをお寄せいただきありがとうございます。
申し訳ありませんが、お客様の投票の記録に失敗しました。もう一度試してください。
違反を報告
レビュー を日本語に翻訳する

Amazon Customer
5つ星のうち4.0 this is the point where robin williams started to get really good
2011年8月11日に英国でレビュー済み
Amazonで購入
I watched "awakenings" because I am trying to watch all of the films that Robin Williams has been in, to be honest I only do this because I am somewhat obsessed with completing collections (not that this particular collection is anywhere near complete, Robin Williams has an awful lot of films).

During my quest to collect all of Robin Williams' work I have gone from an avid fan that truly believed this guy could not be in a bad movie to realising that he defiantly can. But never the less I persevere through his back catalogue and hope that I never again come across stinkers like "seize the day". I was trying to avoid seeing "awakenings" because I thought it was going to be another "seize the day".

First impressions from the poster and the trailer were not looking good I thought that this film looked terrible. But then I noticed that the film is directed by Penny Marshall "I know that name" I thought to myself, so I looked her up. Turns out she was the director of two of my all time favourite films `big' and `jumpin' jack flash' so with a new optimism I popped the dvd in the player and curiously watched as to what Penny Marshall had come up with this time.

Loosely based on a book by real-life neurologist Oliver Sacks, `Awakenings' marked the high point of a successful side career for Sacks as a chronicler of unusual medical case histories.

The film often displays the easy sentimentality typical of director Penny Marshall, which makes you feel quite warm and fuzzy. The plot is pretty typical in the sense that it pitted its heroes against mindless hospital bureaucrats in a tired effort to force a obligatory antagonist into the story, but because the film is based on true events, this plot device doesn't seem too over blown (as it so often can do in films).

The performances of stars Robin Williams and particularly Robert De Niro make it a very interesting film to watch. Cast against type, the two pros sink their teeth into their roles, Williams, as a shy genius and De Niro as a man with a teenager's mind betrayed by a collection of physical tics and twitches.

Apparently so comfortable was Williams in the doctor role that he repeatedly returned to it and played healers in numerous later films, including NINE MONTHS (1995), Good Will Hunting (1997), What Dreams May Come (1998), and Patch Adams (1998).

For me, De Niro was just a perk to this film for I watched it for Williams, I don't know why but Williams seems to do some of his best work playing a doctor and this film is no exception. But inevitably, when comparisons to `patch adams` and `good will hunting` are made `awakenings` will always end up at the bottom of the pile.
続きを読む
3人のお客様がこれが役に立ったと考えています
役に立った
フィードバックを送信中...
フィードバックをお寄せいただきありがとうございます。
申し訳ありませんが、お客様の投票の記録に失敗しました。もう一度試してください。
違反を報告
レビュー を日本語に翻訳する

Red Rose
5つ星のうち5.0 no such thing as a simple miracle
2008年7月21日に英国でレビュー済み
Amazonで購入
An emotional roller coaster of a film based on a true story. A marvelous performance by Robin Williams who plays the lead performance as the brilliant Dr Malcolm Sayer, who takes up a new post at the Bainbridge Hospital and discovers a group of patients that have been in a semi-coma for several decades as a result of an epidemic many years earlier.

Using a new experimental drug he manages to awken Leonard Lowe (Robert DeNiro), who he befriends, and then all of the other patients. But is enough known about this wonder drug ?

Whilst trying to teach his patients the joys and pains of living, Dr Sawyer quickly learns that he is out of touch with his own emotions.

This is not an edge of your seat action film, but you will remained glued to the set. Yet another DeNiro gem and also one of Robin Williams finest roles. Very enjoyable, but might put a tear in the eye of some.
続きを読む
5人のお客様がこれが役に立ったと考えています
役に立った
フィードバックを送信中...
フィードバックをお寄せいただきありがとうございます。
申し訳ありませんが、お客様の投票の記録に失敗しました。もう一度試してください。
違反を報告
レビュー を日本語に翻訳する

stuckinazoo
5つ星のうち4.0 A very affecting true story
2010年10月2日に英国でレビュー済み
Amazonで購入
It's 1969 and Dr. Malcolm Sayer (Robin Williams) takes up a position in a New York hospital where he encounters survivors of the Sleeping Sickness epidemic that occurred decades previously. The story of one patient, Leonard Lowe (Robert De Niro) is told in the first scene and it is his case that Dr. Sayer responds to in a new quest to have his sleeping patients react to him. After many experiments with drugs and appeals to his employers, Sayer achieves something of a miracle for his patients and the hospital when the living statues wake from their decades long sleep. This brings about tougher challenges for Sayer as he struggles to control the effects of drugs on his patients and they on him.

The events in this drama, particularly the awakenings and the aftermath some months down the line, pack an emotional punch. The new and not always happy circumstances each patient finds themselves in are hard to come to terms with, as is the great responsibility Dr. Sayer now feels for them. Leonard is now capable of feeling emotions he didn't know he had and quickly wants to learn how to be the complete adult he should be. Through it all is another kind of awakening; that of Dr. Sayer himself, who for so long buried his emotions beneath his work, they appear forgotten. As with Leonard, we see him taking steps to become complete again.

People with an aversion to sentimentality may think this film is full of it, but shouldn't be put off. I found emotions were kept in check and as someone who can't stand the sentimental, I wouldn't have this film any other way. It's of course helped by the two brilliant performances that underpin it. Williams is well known for his loud, brash characters but seems to find another level in becoming someone hidden from others. As the introverted doctor, he is very compelling. De Niro (who spent time in a mental hospital before production) is just fascinating to watch. By turns childlike and joyful, then disturbed and chaotic, I am drawn to his character from the second he shows any expression. Considering his other roles of that time (this came out the same year as Goodfellas), his range is extraordinary.

A well researched and thought provoking fact-based drama that should stay with you for a while.