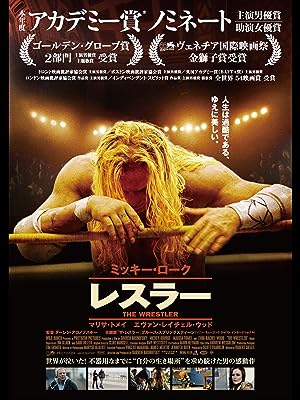 Craig
5つ星のうち5.0 Does for Wrestling what Rocky Does for Boxing
2020年7月17日に英国でレビュー済み
Amazonで購入
Being a big wrestling fan I absolutely love this movie and feel like this should have done to wrestling what Rocky did for boxing. It's depressing but man it is such a great story from Robert Siegel, is directed excellently by Darren Aronofsky and the performances all around are great too. Mickey Rourke brings his A-Game here; I honestly believe he should have won Best Actor at the Oscars for this because he simply IS Randy "The Ram" Robinson in this movie. And it has a great soundtrack to boot. As a wrestling fan this is definately a must watch, but I'd reccomend this movie to any movie fan who just loves a great story.
続きを読む
違反を報告
レビュー を日本語に翻訳する

Albatross
5つ星のうち4.0 Tragic and poignant - is that really Mickey Rourke?
2013年8月4日に英国でレビュー済み
Amazonで購入
Mickey Rourke may be an unusual choice for a leading man these days, but, upon watching The Wrestler, it was hard to imagine the film with anyone else.

He plays a `burned out' wrestler whose glory days have long since passed him by. He lives in a trailer, works part-time at a local supermarket and barely sees his daughter. We watch as he tries desperately to form relationships and regain his career. Like people said that The Man Who Fell to Earth was basically about David Bowie playing a - slightly warped - version of himself, The Wrestler is effectively Mickey Rourke. He's seen his best - acting - days and is trying to climb back up the ladder - the hard way.

If you're not a fan of `professional' wrestling, don't worry. The actual `ring time' makes up about 12 minutes of a 1 hour 40 minutes film. And, what grappling there is, only proves the point that it's all fake and one big show for the people.

There's little to laugh at here. It's a sad tale of someone who has had a taste of the big life and lost it. Now he'll do anything to get it back. It's definitely not a feel-good movie. If you want something tragically poignant, where you root and feel sorry for the `hero' all at the same time, try this. Mickey Rourke is more than just muscles.
続きを読む
5人のお客様がこれが役に立ったと考えています
違反を報告
レビュー を日本語に翻訳する

Randy "The Ram" Robinson (Rourke) is a renowned wrestler, a show stealer. But one night he is forced to retire and starts to look at his life in a different light.

Being a huge fan of the American wrestling entertainment such as WWE and TNA I looked forward to seeing how wrestling was portrayed in this film. But I was given so much more. This is a strong passionate drama that will make you laugh, cry and stand up and cheer. And there are two reasons why: Mickey Rourke and Darren Aronofsky.

Much was made of this film being Mickey Rourke's big come back after all he has been through over the years. This is a film that really shows his masculinity, his strength but combined with an underlining sentimentality and a deep internal struggle brings about an Oscar nominated performance.

The Ram is a hero. The wonderful opening credits show a montage of the wrestler at the top of his game, showcasing his talents and being the man in that era. As the film progresses we can see how the character changes through highs at independent events to the lows with his family life. Ram is an inspiration through strong will and a determination to make everything right for his family and for himself. The way he portrays himself to his neighbours, and the choices in language all collate into a fantastic person, that is always a joy to watch.

Aronofsky's writing chooses to follow Rourke's character from start to finish and his choices of including other interests such as strippers, family, wrestling, drug smuggling and food service jobs all mix to make a believable, almost relaxing story. Everything flows smoothly with the excitement of the wrestling matches to the heavy dramatic scenes between father and daughter to the tense love scenarios.

The film has a real independent feel. There is no glitz and glamour, everything is portrayed as run down and difficult living environments. Ram's home is shabby, his workplace is stressful but his real life lies in the ring. Aronofsky's close ups are great but his scenery shots are even better.

The wrestling matches are the highlights of this 2008 picture. Being a fan of wrestling I enjoyed seeing how the independent scene was worked, how each wrestler interacted with each other behind the curtains and seeing how brutal some of the `weapons' used were. The brutality and execution from all the actors and the crowd worked wonders.

Given Ram's life and everything he has been put through it is inspiring to see a person give everything into something they enjoy doing and through Rourke's strong dynamic performance and the directional master class of Aronofsky, this is a great drama that is definitely worth checking out.

Storms EniGma
5つ星のうち4.0 a sad reality check of what becomes of our heroes
2012年4月7日に英国でレビュー済み
Amazonで購入
Mickey Rourke is absolutely brilliant but be warned this is not a feel good movie, it is a realistic look behind the curtain of the professional wrestling world.
The story of Randy 'The Ram' Robinson(Rourke)though fictional mirrors the lives of many of the 80's wrestling superstars dealing with painkiller and other drug addictions and a seperation from the outside world.
Once a superstar and all time great of pro wrestling, Randy the now aged and an old man is now wrestling in school gyms for little pay earning just enough to scrape by in life, just a shaddow of his former self and sold out arenas of his path, but wrestling is all he knows.
The Wrestler is a reminder that the larger than life wrestling heroes from our child hood are human who have often sacrificed all they have to be left with nothing but hurt and pain and shattered relationships from a life constantly on the road.
Marisa Tomei's part is not to be understated, she plays Randy's regular stripper who he has developed some what of a weird bond through many years of being a customer, Like Randy Marisa's charactor is also aging and has her best years behind her. Sadly Randy's bond with his stripper is essentially the only functioning relationship in his life seeing as his daughter hates him
Don't watch this if your wanting a Rocky style feel good story, this is a sad movie but is worth the journy
続きを読む
2人のお客様がこれが役に立ったと考えています
違反を報告
レビュー を日本語に翻訳する

Sarugumo
5つ星のうち4.0 The Wrestler
2009年9月29日に英国でレビュー済み
Amazonで購入
`The Wrestler' is the film that has catapulted Mickey Rourke back into the limelight and with good reason. It is pretty obvious from the get go that we are in for a great performance. Following a `has been' wrestler who tries to maintain his former glory in various weekend bouts, this film paints quite a sad picture at times. Rourke plays the part excellently where you can't help but like the main character despite obvious flaws. The sub plot where he falls in love with an aged stripper, and tries to date her, mirrors his own physical demise amongst younger, more athletic and often more extreme wrestlers. This film may mean more if you know of the big eighties and nineties wrestlers, but to be honest this is a film about one mans struggle to keep doing the thing he loves and find some meaning in his life and the wrestling theme is merely a vehicle for that. The final scene is actually quite touching and you are left impressed by the acting from all involved throughout the film. This film was reminiscent of the Rocky films (especially Rocky Balboa), due to the run down locations and style of direction and it easily deserves a place up there with other great sporting themed films from the past. A solid effort from all involved and well worth a watch.