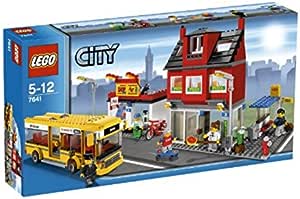 Simon Hall
5つ星のうち4.0 At Last! Lego City Shops!
2009年8月12日に英国でレビュー済み
Amazonで購入
Hooray Hooray! For the first time in ages, we have Lego City stuff thats not a Fire or Police Station. Brilliant. being the overgrown manchild that I am, I emailed Lego earlier in the year and asked them why they didn't make more mundane City sets anymore and I was told to watch this space. Well, here we are!

First off, the bus is excellent. Has there ever been a Lego bus before? I'm not so sure there has been, but this version is excellent. It has plenty of seats, a nice colourscheme, lovely details (i like the adverts) and a cheery driver. Only some better doors would have improved this - or at least ones detailed to look like the sliding ones you get on real buses.

Next we drop off the jolly businessman at his bus stop (he must be an ethical city type, happy to mix with the hoi polloi on public transport!), which is a lovely detailed effort. I am particularly fond of the streetlamp. Yes, you may mock, but its a neat bit of engineering. there's no timetable, suggesting this is one of those mid-point stops where you just have to turn up and hope for the best.

Just along from this we stop off at the skate shop to hang out with Grizzly Mick (probably has tatoos and plays heavy metal or - God help us -Emo in his shop), proprietor of 'rad' skateboards and 'sick' bicycles. Oh yes, I'm down with the kids - and look here's one now on his skateboard! he's a nice touch, but i don't like the stumpy midget legs, it makes the figure look deformed (obviously, this is a personal thing). The shop is fairly sparse, but has the right level of detail for something its size, with a cheery sign and CCTV camera and funky window display. I do like the way the skateboard is hung for display. Lovely.

finally, after all that excitement, we go to the imaginatively titled Pizza restauruant (its called 'Pizza'. wonder what they sell there..?). This is a lovley old-school inspired set. The three floors are modular and clipped together, with the groundfloor containing the takeaway part with superbly worked Pizza oven and paddle for handling the Pizzas - just like in a proper pizzeria! The second floor contains the restaurant, which has a couple of tables and chairs and wine glasses. Its not big on detail, but it does the job. the attic is empty, unfortunately. It would have been good to make this some kind of office/ storage area perhaps. As with the old school sets, there's no stairwells (unlike with the highly detailed but massivley expensive Greengrocer's / Cafe Corner sets) so its down to your imagination to work out how the folk get upstairs, but frankly, that didn't bother me then and it doesn't now. The place is run by Brenda, who seems not to care that she should perhaps be wearing a hairnet so she doesn't get her hair in people's food. i'd watch out if I were eating there!

This is a smashing little set with loads of play value. It could have been improved with the addition of maybe two more minfigures, but decorated with the smaller City Mini-figures set, this really looks great. Hopefully, this will do enough business to allow further non-emergency service sets to be released and perhaps as individual pieces, rather than as a huge box set of mulitple items.
続きを読む
57人のお客様がこれが役に立ったと考えています
役に立った
フィードバックを送信中...
フィードバックをお寄せいただきありがとうございます。
申し訳ありませんが、お客様の投票の記録に失敗しました。もう一度試してください。
違反を報告
レビュー を日本語に翻訳する

Frances
5つ星のうち3.0 My son loves it, but over priced
2014年1月2日に英国でレビュー済み
Amazonで購入
My 9 year old wanted this very badly for Christmas, I thought at the time that it was very expensive but this was all he wanted. Obviously he was really excited when he received it, he spent 2 / 3 hours putting it all together and still loves it, so for him it is a big hit, but ..... and there is a big but. When I saw what he had built, a bus, shop etc i was expecting more things, for the money paid, i was actually disappointed this looked like it should have been a £50 product not £90 (inc p&P)??? Ok, so this is the only Lego set with a bus, a very cool bus, according to my son but still, this is over priced.

SueS
5つ星のうち4.0 Lego City
2011年5月30日に英国でレビュー済み
Amazonで購入
This was a set that my son had wanted for some time and we decided to purchase it for a Christmas present. The box is large, however, when you open the Lego and once made up it is quite a small set. My son was a little disappointed and there wasn't much to do with it either, he said. It now sits on a shelf and isn't played with at all. If you have a child that is collecting Lego then this may be OK for them, but if they like the more interactive sets, that actually do something then leave this one alone. Not cheap either.
続きを読む
2人のお客様がこれが役に立ったと考えています
役に立った
フィードバックを送信中...
フィードバックをお寄せいただきありがとうございます。
申し訳ありませんが、お客様の投票の記録に失敗しました。もう一度試してください。
違反を報告
レビュー を日本語に翻訳する

Mrs Donnelly
5つ星のうち5.0 Great Lego
2010年12月30日に英国でレビュー済み
Amazonで購入
My son loved this lego. It is part of the City and he easily built it in a few hours. Very sturdy and wonderful detail.