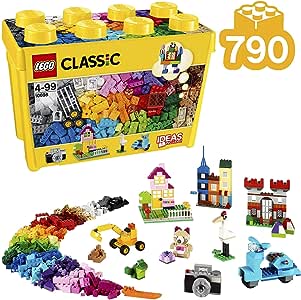 Rahul Madhavan
5つ星のうち4.0 Lego is great, but the 790 pieces don't all add up
2019年5月24日にインドでレビュー済み
Amazonで購入
Overall: Lego is great. There are better lego models available.
---

Intro:
We in India tend to look for best value for money. And then we think this set with it's 790 blocks is great value for money as cost per block is low. But it doesn't add up. Reasons below
---
Benefits of Lego:
I read some story about a Women Nasa astronaut in Goodnight Stories for Rebel Girls. Then when i read an interview of her, she spoke about how her father gave her lego toys instead of Barbie Dolls and that made all the difference in her perspective and early intelligence. I'll try to summarize below some points
1) Good imagination: Give your child a set of lego blocks and watch them trying to build things that they are imagining in their heads. Be in buildings or parks or airplanes. It may be small and simple but it is their creation
2) Spatial Intelligence: Our schools have subjects on verbal intelligence as well as mathematical intelligence. Anyone having taken an IQ test knows the third part of intelligence is spatial ability. Lego greatly improves that.
3) Abstraction: Once your child is comfortable with lego, try giving them a picture (of something build-able) and ask them to try and build it. I was surprised that this method worked for anything from Temple Gopuram to tree. When i thought back at the exercise I felt it involves sketching out the boundaries of the object in your head, translating it into blocks and then holding the image in your head and then building it. Such abstraction ability is very good and not easy to teach (drawing images seen also allows this to a large extent).

---
How to inculcate the lego habit in your child:
1) You need to sit with your child through the first few lego builds. You need to ensure they are not frustrated as their tiny hands try to manipulate the pieces into place. Lego learning is a lesson in patience for parent and child.
2) The first few times you allow them to build on their own, it will be bad. Don't tell them that. They are tranforming images they see into objects. These are obviously more simple translations that you are able to do in your head. That they are able to do it itself is worthy and deserves appreciation. Give them lot of encouragement whatever they build
3) Don't start building yourself!: This is super important. It is easy for a child to fall back on you building. Even if you show them something, break it and help them build it again on their own
4) Don't create monuments: Try to remove attachment to any one build. Make it a habit to break stuff after it is made so that everyday is a new start. This will encourage learning how to build from scratch. Note that this is only for the classic blocks and not Technic etc, which require more than a day to build
---
When to start Lego:
There are various lego types that are there. Though the recommended age is 5+ years, I can share my own experience of a younger child. I have a child who just turned 4. She has been building since she was 3. The Lego Classic sets are for people of this age. Children under 7 cannot really follow instructions given on the paper given with the set so Lego Creator and Technic are not recommended. So this brings the question - which lego?
---
Which Building Blocks:
I hope i have convinced you by now that building blocks are super important toys. This brings the question which Lego blocks is the right one for you.
1) Non Lego: Other brands than lego toys. There are some great options here, and are lower cost. They do have flaws and are not as enjoyable as Lego, but at sub 2000 price points, they are much better than buying few lego blocks.
2) Lego Duplo: This i believe is not great. Don't recommend this
3) Lego Classic: This shoudl be the standard buying option for starter Lego Kits. Apart from this 10698, there is 10696 and 10715. I would rate both of these higher than this particular set. Mainly because they are lower cost for the same standard blocks. Many of the blocks in this set are smaller blocks (1s and 2s). The main set of blocks you end up using are the 4*2 doubles which form the bulk of any structure getting built. You can get many of these with the 10696 as well
The main thing you cannot build with these sets is humans. Even with great imagination, they tend to look grotesque. Since human faces and figures form such a large part of a child's imagination, I recommend the *Lego City* blocks (see below) as a second buy after the lego classic.

3) Lego City: The main reason to buy lego city (even if they are overpriced) is that they provide people. The sets Lego City People's pack: Outdoor Adventures (60202) and Lego City Fun at the Beach (60153) are recommended here. This should be bought as the second or third set after Lego Classic. Just for these sets I would say that the price you pay is worthwhile even though the number of pieces is low, you will get your money's worth because you are using these sets as addon to the Lego Classic.

4) Lego Creator and Lego Technic: This can only be for much older children (over 7-10) or for those children who are very adept at Lego already. Else you will end up making most of it yourself rather than your child.

5) Other Lego branded ones (like Lego Disney or Lego XYZ Movie name): I don't suggest these at all. They are simply overpriced and branded

6) Lego baseplates: These are overpriced like anything but you may have to eventually buy them as the things your child builds become larger.

The main reason I reduce stars for this set is that I'm comparing with other lego set - 10696. You get more of the same blocks if you buy this one, but you can diversify and buy one people pack and one lego classic at the same price, go for that option.
I would suggest this at the stage where your child is building large sets and you need to add many more blocks to their play set. Maybe a couple of birthdays after you initially bought the first lego for your child. If you don't mind the extra money over the other lego classic sets, then this is worthwhile.
続きを読む

Book Reader
5つ星のうち2.0 Expensive for what is sent
2019年4月7日に英国でレビュー済み
Amazonで購入
Lego is well the most brilliant of construction bricks. Strong well made and last for years. As an adult I have for 50 years plus enjoyed Lego. Yet this box while containing the excellent bricks has a number of problems.
For £30 plus there are a disappointing number of actual bricks supplied. I was hoping for at least 1kg. But well less than half.
Secondly the storage box is mid Shaped and doesn’t interlink with other Lego branded storage boxes.
Over all not that impressed.
続きを読む
26人のお客様がこれが役に立ったと考えています
役に立った
フィードバックを送信中...
フィードバックをお寄せいただきありがとうございます。
申し訳ありませんが、お客様の投票の記録に失敗しました。もう一度試してください。
違反を報告
レビュー を日本語に翻訳する

Jo London
5つ星のうち4.0 Great set, recommend for young and old!
2019年3月5日に英国でレビュー済み
Amazonで購入
Excellent unisex set and pretty decent V4£ (for real Lego!) The box is good for storage, apart from the silly grooves at the bottom, and the pieces are a good mix of colours and shapes. The booklet has a handful of nice, relatively easy guides to building that my 4yo boy was able to breeze through. I only wish it came with a couple of big flat bases like the old-school sets! Delivery was prompt too :)
続きを読む

Rosco
5つ星のうち4.0 Excellent, but not enough wheels!
2017年7月11日に英国でレビュー済み
Amazonで購入
Excellent set. Lots of variety of building bricks. But it could do with a larger base plate, and more wheels and axels. You can't even build 2 four wheel cars. Lots of little single brick toppers, like eyes and amber and red lamps. It has a couple of the little turntable pieces,, great for making cranes or a quick helicopter. In combination with wheels from other sets, this makes for hours of concentrated entertainment.

Loads of space in the box, so you can put any other lego sets into it for a convenient storage solution for the lego. Well worth the price.
続きを読む
23人のお客様がこれが役に立ったと考えています
役に立った
フィードバックを送信中...
フィードバックをお寄せいただきありがとうございます。
申し訳ありませんが、お客様の投票の記録に失敗しました。もう一度試してください。
違反を報告
レビュー を日本語に翻訳する

LastMinuteMum
5つ星のうち5.0 Perfect starter set for little engineers
2018年8月24日に英国でレビュー済み
Amazonで購入
Bought this as a starter set for our 4 year old and he has hardly stopped playing with it since it arrived. Plenty of pieces for him to get started with, handy ideas for a first few projects and links to online demos. Great value for money I would say given the number of pieces and a good gift.
You need to buy the big mats seperately but other than that, it’s hours of fun.
Just as described and arrived in perfect condition.
続きを読む
12人のお客様がこれが役に立ったと考えています
役に立った
フィードバックを送信中...
フィードバックをお寄せいただきありがとうございます。
申し訳ありませんが、お客様の投票の記録に失敗しました。もう一度試してください。
違反を報告
レビュー を日本語に翻訳する

chocolatetoozik
5つ星のうち5.0 Excellent
2019年5月20日に英国でレビュー済み
Amazonで購入
Love the Lego included. As previous reviews mentioned that the box came only half full we bought extra set to fill the box with and are happy that the box is large enough for all our needs. I was pleasantly surprised with the included leaflet on step by step construction ideas and look forward to exploring the Lego website also. Lovely selection of both pieces and colours. I don’t feel like I will need to buy any more Lego for a long time.
続きを読む
5人のお客様がこれが役に立ったと考えています
役に立った
フィードバックを送信中...
フィードバックをお寄せいただきありがとうございます。
申し訳ありませんが、お客様の投票の記録に失敗しました。もう一度試してください。
違反を報告
レビュー を日本語に翻訳する