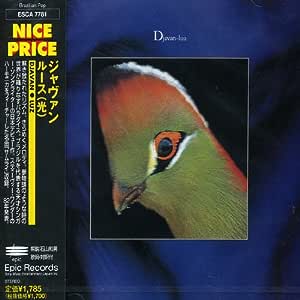 Dr. Debra Jan Bibel
5つ星のうち4.0 Djivan, 1980s American Style
2011年7月26日にアメリカ合衆国でレビュー済み
Amazonで購入
Djavan is a pop star, so I cannot complain that this album is fully American style soulful pop, which even has Stevie Wonder on harmonica on the first track. After all, these are Djavan's melodies and lyrics. He also had a hand in most arrangements, and his wonderful sensitive voice is present throughout. What is missing is the urgency, the spark, the joy of his earlier albums and also the artistry that would appear twenty years afterwards with the outstanding album Milagreiro. In comparison, Luz is too relaxed, although I still very much like it. The album ends well but far too briefly with Minha Irma, a faster, propulsive 2-minutes. The album stems from 1982 and has that 80's feeling. It was recorded and mixed in Los Angeles. This edition is Japanese, and I face liner notes in both Japanese and Portuguese, which is somewhat amusing considering the first track, his popular tune, Samurai.
続きを読む
3人のお客様がこれが役に立ったと考えています
違反を報告
レビュー を日本語に翻訳する

Mnemosine
5つ星のうち4.0 still looking
2003年5月6日にアメリカ合衆国でレビュー済み
Amazonで購入
It is hard to ruin Djavan with a bad production. I have heard another version of "Samurai" that I like better, same with Stevie Wonder in harmonica. "Sina" is not as good either. Maybe it is Ronnie Foster's influence? In general, arrangements are very weak in comparison to other CDs he has: when you listen to Oceano, and then to this, you feel a noticeable difference. Well crafted, yet not Djavan's best. Maybe a good start if you have only been listening mostly US music, because it introduces some of Djavan's interesting elements in a softer way, but once you are ready, you may want to move on. Then you can hand this CD to someone else. Or if you do not like it, blame the producers. I do.
続きを読む
4人のお客様がこれが役に立ったと考えています
違反を報告
レビュー を日本語に翻訳する