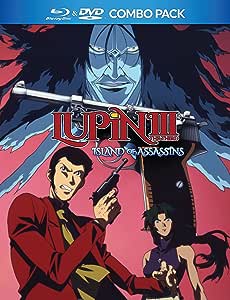 Jane b.
5つ星のうち5.0 Darker tone is one reason why this is good
2014年5月23日 - (Amazon.com)
Amazonで購入
I love my Lupin III, but there's been a lot of it over a very long period of time, and without some variety, things can get stale. The darker tone overall and bleaker outlook for some of the characters is surprisingly refreshing as opposed to disturbing or off-putting. There's still plenty of what makes the series great, but there's also something a bit different. It's much appreciated.

The sub-titles are good, as is the translation (I won't offer an opinion on the dubbing - I don't watch my anime dubbed), and for once I have little issue with Funimation changing the title of the film. Since the original title, "Walther P38" or "In Memory of Walther P38", refers to Lupin's preferred sidearm and that sidearm also happens to be one that was standard issue during WWII to high level Nazis, most notably the Gestapo, I can see how leaving it as-is might be seen as being in poor taste.

The film is not without its minor problems, one of which being that we have yet another attempt to alter Lupin's character design, and, as usual, it's distracting at best. Another being Funimation's traditional barebones extra features. I doubt it would have killed them to throw in a short article on the history of the series along with a filmography or something.

Hawkeye
5つ星のうち5.0 Great Special
2017年7月28日 - (Amazon.com)
形式: DVDAmazonで購入
Quite possibly the best Lupin tv special of the 90's if not overall. This special moves with a great pace and a surprising amount of action and is more toned down and realistic than one might expect. Definitely highly recommend.
続きを読む
レビュー を日本語に翻訳する

newagealchemist
5つ星のうち4.0 Newer Lupin....awesome
2013年4月21日 - (Amazon.com)
Amazonで購入
It's a newer Lupin movie, but the plot isn't bad! I know, I know...impossible right? Island of Assassins was a very entertaining film and seems like it would be even if you're not a die hard Lupin fan. My biggest complaint is actually my biggest complain with other Lupin movies as well: not enough stealing! It seems as though Lupin and co. always start the film trying to steal something and then totally forget about by the end...still a good film.
続きを読む
レビュー を日本語に翻訳する