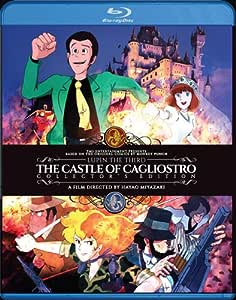 Stella Starnes
5つ星のうち5.0 crime has never been cooler than this
2010年8月30日に英国でレビュー済み
Amazonで購入
This is the ultimate animated crime film. Full to bursting with brilliant action, an old castle in the middle of nowhere which seems to still be in business, a handsome, but crafty crime lord, cool settings, a thematic storyline, a crazy young runaway thief on the run from a Police Inspector and a nineteen year old damsel, it's the "James Bond" of Japanese anime films. I always laugh at the antics of Wolf, since he's particularly talented with all kinds of things, especially the windy thing hidden in his belt buckle, and his agility skills when climbing rooftops. He also happens to be very good at getting himself into trouble with the Police Inspector and the Count of Cagliostro, and the Count's butler who looks like he's eaten something which made his hair and face go green is as villainous and scheming as you could wish. There are some amazing stunts too, such as the scene in which Wolf manages to make a perilous jump onto the young girl's chamber tower, the swimming scene, the confusion between two identical Inspectors and a trap door, one in a deserted hallway, and one in the Princess's room which look like they're never there. The funniest for me is when Wolf and the Inspector are both on the way to rescue the Princess when they're meant to be enemies, and when Wolf goes off at the end pursued by the police whilst Fujiko, an undercover agent rides on up the road to avoid being caught as well. It's the high speed chase somewhere in the beginning that gets the daring action started. If this were live action, it would be even better, but I think it's great as it is. Since other similar films like "Nausicaa Of The Valley Of The Wind", "Laputa: Castle In The Sky" and "Princess Mononoke" which I've also bought, it stands in fourth place beside them. It's a change from the more gory crime you see on television, and an ideal film for teenagers.
続きを読む
3人のお客様がこれが役に立ったと考えています
役に立った
フィードバックを送信中...
フィードバックをお寄せいただきありがとうございます。
申し訳ありませんが、お客様の投票の記録に失敗しました。もう一度試してください。
違反を報告
レビュー を日本語に翻訳する

The Manga version released in 2002 features a superior transfer (others would disagree) in the original reported aspect ratio of 1.85:1 despite being non-anamorphic (4:3 Letterbox). The subtitles are pretty good for the Japanese version and new Manga English Dub truer to the Japanese script. This new dub is OK but Lupin has always been mischievous/anarchic in English which is unfortunately not the case here.

Manga's voice actor David Hayter who is credited as Sean Barker - the name of his character from 'Guyver: Dark Hero', is much more restrained and respectful to the material but in doing so is missing all that made the original English dub work so well. Hayter is an OK actor but better screen-writer in my opinion.

Now to the 2005 Optimum Asia release. The image is of poorer quality than I'd like. It is typical of these Optimum releases with complete storyboards as an alternate angle to have some noticeable blocking/compression artefacts (but not so bad as to spoil enjoyment of the film). This time the aspect ratio is 1.77:1 anamorphic and does include some minor window-boxing presumably to prevent over-scan (???). I try to avoid Optimum/Studio Canal UK anime DVDs in favour of Region 1 USA imports where available. I'm not a fan!

The introduction by Jonathan Clements is fascinating/informative and is a brilliant way to introduce UK audiences to a character they may be less familiar with as only a few lupin feature length adventures have been given an outing on VHS of DVD in this country. The introduction will hopefully convince those who know Miyazaki's work from the Academy Award winning 'Spirited Away' to watch the likes of 'Nausicaa: of the Valley of the Wind' & 'Princess Mononoke'. The trailer and line-drawings complete the extras.

The English soundtrack for Optimum's 2005 DVD is the original Streamline Pictures USA Dub produced by 'Robotech' legend Carl Macek previously available on the VHS. This is much more in keeping with how the character of Lupin is played in memorable USA/UK dubs. For the original dub they downplay the drama & accentuate the comical aspects of the performance. It is less subtle but very funny. Bob Bergen (who is the main voice actor to play Porky Pig since Mel Blanc passed away) is credited as Lupin and in all honesty I will always hear the voice used in the Streamline dub as it was the first audio track I heard in any Language.

This older dub is easier on the ears and features a more appropriate English script.

To compare the difference think back to Astro Boy 1963 as presented edited and dubbed for the USA then to the muddled 1980 colour series. The name Astro Boy no longer made sense. Tobio Tenma in the Japanese series Tetsuwan Atom - Mighty Atom was renamed Astor Boynton III in the Fred Ladd English adaptation but became Toby Boynton in 1980 in name only with no script revisions to explain the USA name for Astro Boy. Referencing his status as an atomic powered robot/android.

Yes I know that was a little off-topic but dubs succeed or fail based upon how you see your intended audience and perceive the genre of the project. Is 'Cagliostro' an adventure, heist, action, suspense or comedy picture. All could be used to describe this film. With that in mind the Streamline dub works best for a western English speaking country like the UK.

Sometimes it is OK to make dubs for foreign film and television with linguistic and regional references that are localised to suit a particular market. The 'Castle of Cagliostro' and Lupin as a character would certainly qualify for and benefit from this treatment at all times.

If you value the Japanese track starring Yasuo Yamada as Arsène Lupin III buy the Manga release for the subtitles.

An anamorphic Region 1 import reported to be the MANGA dub is available with extras (see product link below) but I can't comment on quality as I don't own it yet. If you can play region 1 DVDs it should be noted the 2006 region 1 special edition release is a double-sided disc with the storyboards and bonus on side B. Reliable reports also say the dub now has a 5.1 English option but the picture is NTSC 480i.

However if you prefer English dubs go for Optimum as it stands up to repeat viewing (a classic).

I bought both Region 2 PAL UK DVDs. These can now be obtained pretty cheaply no matter what your preference.

I hope this helps people weigh the pros and cons.

Keith
5つ星のうち5.0 Lupin is always fun
2013年4月13日に英国でレビュー済み
Amazonで購入
I have seen this version on the old VHS Australian Manga Version (Streamline). I was really happy to see that this copy was the old version I had grown up with. I know that in the 2000's Manga released the Castle of Cagliostro on DVD I wasn't to impressed with this Dub.

Other wise it is a great purchest for any Lupin fan out there, quality of picture was good, both sound tracks in English & Japanese (English Subs) good

I do recommend to watch some of the TV series either Season 1 & Season 2 to understand the relationships between the chararters, I was new to Lupin when I first watched this and I had no idea how they were all connected as a Lupin fan now I really enjoy the chemistry between Lupin & Jigen.
The sceen where their Fiat 500 blows a tyre and they have the Rock, Paper Scissors game to see who changes it is so classic of their chemistry even to the point where Lupin is smoking on top of the car while Jigen is jacking up the car.

Joshua
5つ星のうち5.0 Great directorial debut from Miyazaki
2014年6月13日に英国でレビュー済み
Amazonで購入
This is Hayao Miyazaki's first film, before Studio Ghibli was formed and this was a great way to kick-start his career. Even though the animation does look slightly dated, the colour style and character design is really cool, the main character is memorable, the music is cool with the jazz undertones in certain scenes, the film is a lot of fun and the story itself is solid. I definitely recommend you check this out.
続きを読む
役に立った
フィードバックを送信中...
フィードバックをお寄せいただきありがとうございます。
申し訳ありませんが、お客様の投票の記録に失敗しました。もう一度試してください。
違反を報告
レビュー を日本語に翻訳する

Gabriel S. Mclaren
5つ星のうち3.0 Great movie, great quality
2017年7月25日に英国でレビュー済み
Amazonで購入
Great movie, great quality, however the image for this product shows it in the numbered cardboard sleeve, which is the new remastered DVD & Blu-Ray editions for the Studio Ghibli collection, I did not receive this, which was my original reason for purchasing, bit gutted, but aside from that a great Ghibli film.
続きを読む

Fantastic animation combines with superb background art its almost a work of art in itself.

Slizzle
5つ星のうち5.0 Superb
2013年8月31日に英国でレビュー済み
Amazonで購入
Gotta love Lupin! As a massive fan of the series I loved the film. Its great to see Miyazaki direct a film for a classic japanese anime. The story, plot and characters are superb

Lice
5つ星のうち4.0 Light Hearted Entertainment...
2007年1月21日に英国でレビュー済み
Amazonで購入
The first feature length animation by Hayao Miyazaki is as enjoyable if not more than some of his latest animations. The characters however aren't his own creations but first appeared in a manga by Monkey Punch (who took the ideas from various sources).

Unlike his other animations this is very light hearted and somewhat unserious, a blend of action, lust and humour is evident as a Master Theif sets out to uncover the source of counterfeit money accompanied by his gun totting sidekick, a samurai and an action friendly woman.

It is an enjoyable experience and the quality of the animation is good, especially for the time it was produced, fan of Hayao Miyazaki or not, this is certainly worth checking out, just don't expect it to be anything like his other work.
続きを読む
役に立った
フィードバックを送信中...
フィードバックをお寄せいただきありがとうございます。
申し訳ありませんが、お客様の投票の記録に失敗しました。もう一度試してください。
違反を報告
レビュー を日本語に翻訳する