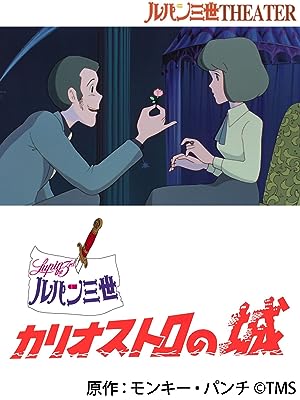 Keith
5つ星のうち5.0 Lupin is always fun
2013年4月13日に英国でレビュー済み
Amazonで購入
I have seen this version on the old VHS Australian Manga Version (Streamline). I was really happy to see that this copy was the old version I had grown up with. I know that in the 2000's Manga released the Castle of Cagliostro on DVD I wasn't to impressed with this Dub.

Other wise it is a great purchest for any Lupin fan out there, quality of picture was good, both sound tracks in English & Japanese (English Subs) good

I do recommend to watch some of the TV series either Season 1 & Season 2 to understand the relationships between the chararters, I was new to Lupin when I first watched this and I had no idea how they were all connected as a Lupin fan now I really enjoy the chemistry between Lupin & Jigen.
The sceen where their Fiat 500 blows a tyre and they have the Rock, Paper Scissors game to see who changes it is so classic of their chemistry even to the point where Lupin is smoking on top of the car while Jigen is jacking up the car.

I have never found Lupin's interest in Clarisse all that beleavable but still cute.
Other supporting charaters make the movie great from Fujiko to Zenigata.
続きを読む
2人のお客様がこれが役に立ったと考えています
違反を報告
レビュー を日本語に翻訳する

Joshua
5つ星のうち5.0 Great directorial debut from Miyazaki
2014年6月13日に英国でレビュー済み
Amazonで購入
This is Hayao Miyazaki's first film, before Studio Ghibli was formed and this was a great way to kick-start his career. Even though the animation does look slightly dated, the colour style and character design is really cool, the main character is memorable, the music is cool with the jazz undertones in certain scenes, the film is a lot of fun and the story itself is solid. I definitely recommend you check this out.
続きを読む
違反を報告
レビュー を日本語に翻訳する

Gabriel S. Mclaren
5つ星のうち3.0 Great movie, great quality
2017年7月25日に英国でレビュー済み
Amazonで購入
Great movie, great quality, however the image for this product shows it in the numbered cardboard sleeve, which is the new remastered DVD & Blu-Ray editions for the Studio Ghibli collection, I did not receive this, which was my original reason for purchasing, bit gutted, but aside from that a great Ghibli film.
続きを読む

5つ星のうち3.0 Great movie, great quality
2017年7月25日に英国でレビュー済み
Great movie, great quality, however the image for this product shows it in the numbered cardboard sleeve, which is the new remastered DVD & Blu-Ray editions for the Studio Ghibli collection, I did not receive this, which was my original reason for purchasing, bit gutted, but aside from that a great Ghibli film.
このレビューの画像

Lice
5つ星のうち4.0 Light Hearted Entertainment...
2007年1月21日に英国でレビュー済み
Amazonで購入
The first feature length animation by Hayao Miyazaki is as enjoyable if not more than some of his latest animations. The characters however aren't his own creations but first appeared in a manga by Monkey Punch (who took the ideas from various sources).

Unlike his other animations this is very light hearted and somewhat unserious, a blend of action, lust and humour is evident as a Master Theif sets out to uncover the source of counterfeit money accompanied by his gun totting sidekick, a samurai and an action friendly woman.

It is an enjoyable experience and the quality of the animation is good, especially for the time it was produced, fan of Hayao Miyazaki or not, this is certainly worth checking out, just don't expect it to be anything like his other work.