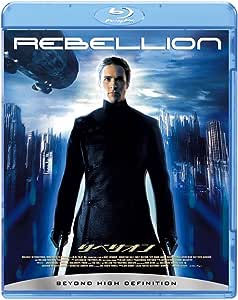 To summarise quickly: This Japanese release is currently the best high-quality version of Equilibrium available. The price is a little steep compared to Amazon USA's prices, but it's still reasonable.

For some reason, the title of the movie has been changed to "Rebellion" on the Blu-ray box cover. However, the contents of the film are still the same.

Unlike the horrendously botched western releases, this version of Equilibrium is presented in the correct aspect ratio. I am not an expert on sound quality, but the HD audio of this release sounds absolutely great. The video is also crisp and clear.

This release also contains default Japanese subtitles for the main film (which can be toggled off), and an optional JP audio dub track. The menu titles are all in Japanese, but don't worry, they're really not that difficult to navigate for a non-Japanese speaker. Most of them are pretty self-explanatory anyway.

Finally, the Blu-ray also contains some behind-the-scenes extras and trailers. The documentaries are in English audio with JP subtitles.

If you've been dying to add this film to your movie collection, but were holding out because of the terrible western releases, buy this version.

Hazuki
5つ星のうち3.0 Good film. Still cropped like the original UK Blu-Ray release.
2020年12月9日に英国でレビュー済み
Amazonで購入
This is second time I've bought this film. Reading the back of the case it says Aspect ratio 16:9 (Original Aspect ratio 2.35:1) Which made me think, oh finally this is the original anamorphic version. Well, its not. Its the same version from the last version of this film when it originally came out on Blu-ray. I could instantly tell this by the image on the disc and its exactly the same as what's on the front cover of the original Blu-ray release. This is just some sort re-issue and the image is still cropped to 1.75:1. Its exactly the same release, but with a different front cover. Why? Don't know. Guess we will never get the original 2.35:1 version here in the UK.
続きを読む
違反を報告
レビュー を日本語に翻訳する

Stefan Ludvig
5つ星のうち5.0 give it a try
2018年4月15日に英国でレビュー済み
Amazonで購入
this is one of the (better) movies you don't know if you are not into movies, with Christian Bale (at least known since batman :-). About the story you can read by your own. One thing you should know is that responsible for this movie is Kurt Wimmer... who? ... he also created Ultraviolet -> before you stop reading because of mentioning Ultraviolet :-) try to get Ultraviolet in the extended version the cut version killed this (great) movie. So now you have two movies to watch :-)
続きを読む
2人のお客様がこれが役に立ったと考えています
違反を報告
レビュー を日本語に翻訳する

Tim
5つ星のうち4.0 A great film you might not of heard of
2019年10月22日に英国でレビュー済み
Amazonで購入
I didn't know this film existed until I stumbled across it while trying to find a film to watch on TV one night (same as Repo Men), it turned out to be pretty good and slightly different from the norm, I would've preferred on Bluray but could only find on DVD. If you like dystopian future films with a twist I'd recommend giving it go.
続きを読む
違反を報告
レビュー を日本語に翻訳する

Sarah X Wallace
5つ星のうち5.0 Grim but very watchable
2014年4月24日に英国でレビュー済み
Amazonで購入
I bought this on a recommendation and was very impressed. One of those movies where small details count, even they seem irrelevant to begin with. Dark brooding atmospheres and great acting make this grim vision of the future very watchable, even if the content is chilling and forbidding.

I would recommend this movie for all lovers of dystopian dramas. It draws the viewer into the nightmare world where even a stray thought or emotion could get you into serious trouble with the law.
続きを読む
3人のお客様がこれが役に立ったと考えています
違反を報告
レビュー を日本語に翻訳する

ShinsFortress
5つ星のうち4.0 Liked it!
2015年12月9日に英国でレビュー済み
Amazonで購入
I think this is the best thing Christian Bale has ever done. Better than his over-wrought Batman performances.

Sure Equilibrium is a mash of bits of George Orwell's 1984 with some Warshawski Matrix-ey bits added, but I still rather liked it. A couple of places the director or screenplay got it 'wrong', but then that's not the worst sin for a sci-fi movie!
続きを読む
3人のお客様がこれが役に立ったと考えています
違反を報告
レビュー を日本語に翻訳する
すべてのレビューを参照します
Amazonプライム会員ならお急ぎ便、日時指定便が使い放題
さらに、映画もTV番組も見放題。200万曲が聴き放題 。クラウドに好きなだけ写真も保存可能。
> プライムを無料で試す