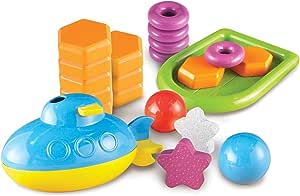 Smallvillenews
5つ星のうち4.0 Suitable for younger children than recommended age of 5. Good for nursery water play or bath time play.
2018年5月16日に英国でレビュー済み
Vine先取りプログラムメンバーのカスタマーレビュー( 詳細 )
This is a really fun and colourful toy, that whilst being shown to use a bowl of water for water play, can also be played with in the bath just as easily and makes bath time fun and educational at the same time.

Apart from general water play, the idea is to promote maths skills like counting and basic concepts of weights and measures, in how much weight (or pieces) your raft can carry before it sinks. Or of course, just play boating and carrying cargo!

I think that this toy is actually aimed at to high and age of 5 plus and I feel it is suitable and safe for children over the age of 3 to be honest. It is a fantastic toy for water play in a nursery setting or as already mentioned, for supervised bath time play at home. I think the only reason this has been aimed at a higher age, is the idea of the STEM promotion, but I don't see why this can't be taught from an earlier age, even in a very basic simplistic form. 3 year olds love to also play in water with boats and floaty toys and there are no small parts that they are likely to choke on or put in their mouth at that age to be honest. I think this is a safe toy for younger children than 5 year olds, but obviously that is a personal choice for parents to consider.

I think pricing has been a little high for this and it has been reduced, but I think a fair price would be around £15 for this set.

S Bruce
5つ星のうち4.0 A small dose of bath-time science
2018年5月26日に英国でレビュー済み
Vine先取りプログラムメンバーのカスタマーレビュー( 詳細 )
We’ve tried a selection of Learning Resources products recently and had mixed results. Some of the sets have been genuinely good crossovers between toys and learning tools, getting our kids to think about some simple physics concepts without realising they’re being schooled. Others have felt a bit less thought-out, relatively poor value and a bit limited in terms of the learning outcomes and activities involved. This set sits somewhere between those two stools.

Though the product photos show kids playing with large glass bowls, you can do most of this stuff at bathtime, providing you’ve done a little bit of preparation in advance. That’s handy both in terms of available time, and not having to worry about where to get such a big transparent water bowl! The experiments themselves are fairly simple, not going much further than simply ‘yes’ or ‘no’ with regard to flotation, so it’s a bit of a one-trick resource- but if integrated into the bathroom toys set, at least they might get re-used and the learning reinforced a little bit.

As I write this the asking price is half of the RRP, the latter being twenty-four quid. For the RRP I think it’s pretty poor value- various bits of cheap plastic and an ungenerous set of activity cards which, if branded as a toy rather than a learning resource, would certainly be under a tenner in a toy shop. For the current actual asking price of twelve quid it doesn’t seem quite such bad value, but neither is it amazing. The card box of the product has a lot of wasted space in it, to make it look like you’re getting more than you actually are- for any soft products I have no problem with padding in the packaging, but for bits of plastic? With the exception of the roughly-A4-size activity booklet, the rest of this stuff could’ve fit into a box half the size of the one you get.

I’m pleased to get toys that squeeze a bit of science teaching into my kids without them realising it, so I certainly approve in principle. However I do think it could’ve been a bit more of a generous set with the activity cards and booklet and so on.