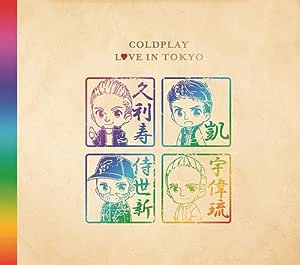 Matthew/Sydney
5つ星のうち4.0 One for Coldplay fans
2020年2月7日にオーストラリアでレビュー済み
Amazonで購入
As a Coldplay fan, I've played the other A Head Full of Dreams tour live albums many times, Live in Buenos Aires (CD) and Live in Sao Paulo (DVD). When I saw this Love in Tokyo CD, I was intrigued and ordered it. The packaging is very detailed, as for all things marketed in Japan.
I feel the first half of the album is recorded in Tokyo, and the second half in Europe. I believe the audio quality picks up and is more dynamic in the second half of the album. The first half of the album sounds a little flat, a little less dynamic. The sound quality is good through the whole album though, just be critical.
I've played the Live in Buenos Aires album in the car with a friend, who found it a bit weird Chris was speaking in Spanish to the crowd. So one thing that can be said for the Love in Tokyo CD is that Chris speaks in English throughout, so the album may appeal to the English speaking audience for that reason (even though it was released for the Japan market). I say full credit to Chris for engaging concert audiences in their native languages.
Another amazing album from Coldplay.

William
5つ星のうち5.0 This is clean.
2019年10月27日にカナダでレビュー済み
Amazonで購入
Good item for collectors like me that love coldplay. Got this in a sleeve and it was 100% new and clean, not dust or anything everything was smooth and the disc was also mint. For 23$ it was a good deal
続きを読む
違反を報告
レビュー を日本語に翻訳する