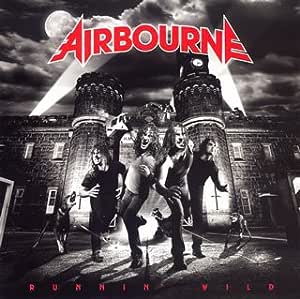 Andy Sweeney
5つ星のうち5.0 High Voltage!
2008年7月2日に英国でレビュー済み
Amazonで購入
I wonder if Airbourne take to the stage in schoolboy uniforms? Because, seriously, that's how I picture them.

As you may have gathered by my opening line and perhaps by reading the rest of the reviews on amazon, this album is so similar to AC/DC it goes beyond "influence". However, this is no cheap rip-off, this is probably the best AC/DC album Angus and the boys never made. To be honest, it really doesn't matter how derivative they are or whether they are imitating AC/DC, what really matters is that they have made an absolutely fantastic heavy rock album packed full of head nodding riffs, blisteringly raw vocals, brilliant bluesy solos and enough hooks to open a fishing tackle store.

For any long-standing AC/DC fan who may be irked by 'Runnin' Wild': If it helps, pretend that you're playing a new AC/DC album and then you'll just plain enjoy it instead of being riled that Airbourne have stolen their musical identity hook, line and sinker. Imitation is the most sincere form of flattery as they say, so try to be flattered instead of annoyed and, for rock's sake, just enjoy the music, it's awesome.

No highlights, no low points, just a storming album from the time you press play until the time you prise the earphones from your ringing ears after 'Hellfire'. Get it, enjoy it, don't take it too seriously. You'll love it.
続きを読む
3人のお客様がこれが役に立ったと考えています
違反を報告
レビュー を日本語に翻訳する

Alan Burridge
5つ星のうち4.0 A Worthy Re-release
2009年3月20日に英国でレビュー済み
Amazonで購入
This re-release would have been more welcomed in the days of vinyl, as the original would long have been worn out. Not so with DVD, of course, but the record company had the good sense to change the cover logo colours from red to blue so that the difference was obvious.
And this (blue) one has got 2 discs, the CD of the original (and knockout) debut album, and the 2nd, a DVD of Airborne's rip-roaring performance at last year's Wacken festival in Germany; along with the added bonus of the band's (so far) 3 videos, (one, as noted by another reviewer, with a cameo appearance from Motorhead's Lemmy Kilmister).
But what do we do with out original (red printed cover) CD, I hear you ask? Well, flog it, give it to a friend to wise them up to this great band, leave it on the bus to do likewise to some unsuspecting soul; or sell it on Amazon's 'New & Used' - but will anyone buy it without the bonus DVD?
続きを読む
3人のお客様がこれが役に立ったと考えています
違反を報告
レビュー を日本語に翻訳する

This particular release, with the DVD, is great value for money. For a debut DVD live performance it's hard to fault. You can see the band are loving every second and despite being on early in the day it's clear that the crowd are being gradually won over. From the already converted at the front as the set goes on you can see the reaction gradually spreading through the crowd.

To be honest, i was scepticle of this band, there are too many revivalists out there adding nothing new to music, but I thought i'd trust the reviews. On one level I was right to be cautious, it has been done before, but ultimately good songs are good songs and, as AC/DC have proved time and again, it doesn't matter how formulaic the songs are...... delivered as tight as this with humour, agression, attitude and great choruses you can't help but like it.

Mr. Robert Reeve
5つ星のうち5.0 Another great Aussie export.
2018年11月30日に英国でレビュー済み
Amazonで購入
Its quite clear that Airbourne are influenced by AC/DC. But who cares? If you like this kind of music its a great album, no ballads here just fast and furious Heavy Metal Rock and Roll. With Airbourne you know exactly what you are going to get.
続きを読む
1人のお客様がこれが役に立ったと考えています
違反を報告
レビュー を日本語に翻訳する
すべてのレビューを参照します
Amazonプライム会員ならお急ぎ便、日時指定便が使い放題
さらに、映画もTV番組も見放題。200万曲が聴き放題 。クラウドに好きなだけ写真も保存可能。
> プライムを無料で試す