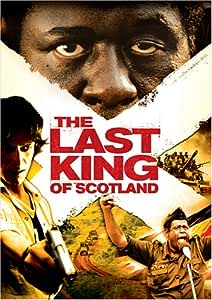 J.Mcdaid
5つ星のうち5.0 Powerfull film
2017年4月22日に英国でレビュー済み
Amazonで購入
Rightfully won an Oscar - amazing film .Set back in time Nicholas Garrigan wants more in life and goes to work overseas in a rural hospital.
Forest Whitaker is amazing in the film and fautless . The film portrays Uganda and its past struggles well .The shots of Uganad are breathtaking and shows a beautiful Country amongst alot of brutality . There are some very emotional scenes that can be distressing but very much needed in the film for viewers to get a sense of what was happening in Uganda at that time . There is a torture scene in the film that is distressing to watch but fantastically acted in my opinion. I wont say much on the story line as it may ruin the watch of the film , but if your not too easily distressed with violent scenes then this may be the film for you .
If you want a film to take you through alot of emotions then this is the film to watch , a right on your edge kind of film.
It is not a true life film but notherless it is extremely powerful.
続きを読む
1人のお客様がこれが役に立ったと考えています
違反を報告
レビュー を日本語に翻訳する

Rappers
5つ星のうち5.0 Wonderful
2015年10月30日に英国でレビュー済み
Amazonで購入
Great, great film and as others have said a mesmerising performance from Forest Whitaker, surely one of the finest actors America has ever produced. He dominates as the colossal Idi Amin, and brings the right balance to the man, where as the audience you never hate him, but are painfully aware he is a dangerous man who ends lives without a second thought. There's some scathing reviews of James McAvoy's performance, but his character is not particularly likeable, and I think he plays it well, as circumstances turn on him. The violence is often bloody, and graphic, and the early scene involving an injured cow is a hard watch, but Kevin McDonald has produced a fantastic film that holds you to attention for the full duration.
続きを読む
1人のお客様がこれが役に立ったと考えています
違反を報告
レビュー を日本語に翻訳する

BrownPolar
5つ星のうち5.0 BrownPolar Verdict
2012年10月7日に英国でレビュー済み
Amazonで購入
If after watching a movie one feels lonesome and a longing to see it again , that is one way of recognising a masterpiece. That is not the only reason why 'The Last King of Scotland' is one: it is an absolutely flawless piece of filmmaking from the first reel to the last and an experience that has the capacity to stay in one's memories long after the end credits rollout.

The director, Kevin MacDonald brings his skills as an award winning documentary maker to the film with great penchant and handles the quite tricky subject matter delicately, humorously and, more importantly, impartially, and delivers a story that could have easily become unpalatable and unpleasant in the hands of a tactless director. A portrayal of the life and times of a brutal dictator like Idi Amin is not as easy as it may seem. He was atrocious, brutally menacing and was obnoxious to even those who were closest to him. If he had any charisma to speak of, that was attributable to his intimidating presence rather than to any amiability. Forest Whitaker's stupendous and award winning portrayal of Amin therefore is central to the success of this film, simply because he brings in his captivating charisma to the role and, being the great actor he is, effortlessly blends in the menace that the brutal dictator used to control his hapless subjects with. The result is that, whenever the character appears, he overwhelmingly commands from the viewer affection and revulsion in equal measure, and in that order, and, in doing so, inescapably renders Amin more affable than he actually was to his defenceless subjects.

In stark contrast, James McAvoy's equally splendid and seemingly effortless performance portraits an immensely charming, youthfully intense and endearingly reckless Nicholas Garrigan who is the antithesis of Amin, not too different from an angel to a demon, and who, to his detriment, captures the heart of the beleaguered dictator.

From the very first moment the two meet, a numbing anxiety, a kind that is incomparable with any past cinema experience, builds up, arresting the audience, and escalates to a paralysing crescendo during the last thirty minutes of the movie.

Equally commendable contributions from the rest of the crew and the cast make this film a great achievement in cinema history. But, what makes it a masterpiece, reminiscent of benchmarks of political cinema such as `The Killing Fields`, 'The Year of Living Dangerously' and `Schindler's List', is that it has the potential to remain in our collective memory, hopefully reminding the generations to come of the barbarity of humanity that, despite countless lessons from the past, remains unabated to this day. Long live the human evolution!

S. F. husseiny
5つ星のうち5.0 This will blew you away?...Forest Whitaker is Idi Amin
2012年4月7日に英国でレビュー済み
Amazonで購入
(the film)A Scottish doctor on a Ugandan medical mission becomes irreversibly entangled with one of the world's most barbaric figures: Idi Amin. Impressed by Dr. Garrigan's brazen attitude in a moment of crisis, the newly self-appointed Ugandan President Amin hand picks him as his personal physician and closest confidante. Though Garrigan is at first flattered and fascinated by his new position, he soon awakens to Amin's savagery - and his own complicity in it. Horror and betrayal ensue as Garrigan tries to right his wrongs and escape Uganda alive.
what can I say?
When thinking of dictators, Hitler comes to mind. Yet here is a monster like no other, who killed hundreds of thousands in Uganda with Death Squads, and history must never overlook what he did. Forest Whitaker more than deserved his Best Actor Oscar for this movie
He rightly picked up the best actor gong at the 2007 Oscars for his sensational portrayal of Idi Amin being so strikingly similar to the real Idi Amin as he was. The rise and terrifying policies of this president should be viewed as a flawless portrayal of a shocking human being and as a historical eye-opener.
This will blew you away.
The Last King Of Scotland is deffinetly a must watch.
続きを読む
2人のお客様がこれが役に立ったと考えています
違反を報告
レビュー を日本語に翻訳する

Strat
5つ星のうち5.0 Excellent Movie
2019年10月7日に英国でレビュー済み
Amazonで購入
Having recently seen a stage version at the Crucible in Sheffield and having a very personal connection with the theme of the movie I thoroughly enjoyed it along with more than a touch of sadness.
It is quite hard hitting in parts and the main characters are faithfully portrayed.
Highly recommended.
続きを読む
違反を報告
レビュー を日本語に翻訳する
すべてのレビューを参照します
Amazonプライム会員ならお急ぎ便、日時指定便が使い放題
さらに、映画もTV番組も見放題。200万曲が聴き放題 。クラウドに好きなだけ写真も保存可能。
> プライムを無料で試す