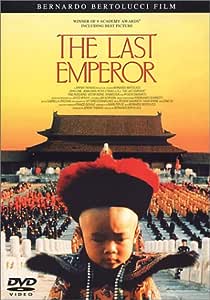 This is a visually stunning film telling the life story of China's last emperor Pu Yi who ascended to the throne as an infant in the early 1900s and spent a lonely and unhappy childhood in the luxury of the palaces in Beijing's Forbidden City before receiving a Western style education from a Scottish tutor. In later years Pu Yi became a puppet regent under Japanese occupying forces, was arrested, incarcerated and "re-educated". When he was released from prison, he worked as a simple gardener before dying on the eve of China's Cultural Revolution in 1967. The story is told in retrospective as the elderly Pu Yi remembers his life.

I remember the film's original release some thirty years ago and the hype around it back then, and I loved seeing it once again. This is the first foreign feature filmed on location in the Forbidden City in China. Director Bernardo Bertolucci made full use of the stunning locations and deservedly was rewarded with a best director's Oscar. The film was nominated for (and won) eight further Oscars including Best Picture, though interestingly none in any of the acting categories. And that's not to say that the acting isn't good. It is. The actors playing Pu Yi at different ages are all solid, as is Peter O'Toole (the only name with real star power) who delivers a very sensitive performance as the emperor's tutor and confidante.

A few words about the DVD I bought, the 2 disc Special Edition: Picture and sound are very nice. Subtitles are not available. The DVD set includes:
Disc 1:
- Original Theatrical Version of the Film (156 mins)
- Commentary with Bernardo Bertolucci, Jeremy Thomas and Ryuichi Sakamoto
- Bernardo Bertolucci: An In-depth Documentary About the Making of The Last Emperor
- Postcard from China
- Theatrical Trailer
Disc2:
- Director's Cut of the Film with nearly an hour of extra footage (209 mins)
続きを読む
7人のお客様がこれが役に立ったと考えています
役に立った
フィードバックを送信中...
フィードバックをお寄せいただきありがとうございます。
申し訳ありませんが、お客様の投票の記録に失敗しました。もう一度試してください。
違反を報告
レビュー を日本語に翻訳する

Pantheon
5つ星のうち4.0 A Great Blu-ray that Could have been Excellent
2013年8月15日に英国でレビュー済み
Amazonで購入
I'll start my review by saying that I only saw this film for the first time last year. It was free with one of the newspapers. Needless to say I loved it and promptly decided to buy the blu-ray

After a bit of research I decided to go with our own UK release. Why? Because all 'official' reviews state that it's the best of what's available. Some people mention the region-locked US Criterion version - well apparently it's the same transfer as the UK release.

So, onto the blu-ray disc.

Picture - I thought the picture was brilliant most of the time; but there are a few shots where the natural grain is more distracting. Never could this be considered a poor transfer though. As for the aspect ratio: I'm aware that this film was originally shot in 2.35:1 ratio and that the Director of Photography has since changed his mind and it's now 2.00:1. Personally, this was not a problem for me. Also, I'm quite happy to not complain about the decisions of the film makers. It's their film after all.

Sound/Subtitles - one of the few disappointments with this disc. Originally in a simple 2.0 Stereo; the blu-ray upgrades to a PCM 2.0 track (which apparently sound almost identical to the Criterion DTS HD-Master 2.0 track). The PCM track does its job adequately; I'm just so used to a minimum of 5.1 that I noticed the difference. I use a Yamaha soundbar for viewing and I can hear the difference. Especially on a film with such a masterpiece of a score. There are no subtitles at all. None.

Extras - Commentary. Featurettes. Trailer. AND....the Director's Cut of the film!!! This is both the DC and the 'Italian TV Version' of the film and runs for an extra 45 minutes. This version is exclusive to the UK blu-ray to my knowledge. I was incredibly pleased to see this included...until I started to watch it. The picture quality is awful. It hasn't been restored and is very grainy and damaged. Anyone with any doubts about the picture quality of the theatrical release on this disc should compare the DC to the TC.

Personally, I think this is a beautiful film and a very good blu-ray release. The ONLY things that could have improved it would have been a 5.1 DTS HD-Master audio track and the Director's Cut to have been remastered.
続きを読む
10人のお客様がこれが役に立ったと考えています
役に立った
フィードバックを送信中...
フィードバックをお寄せいただきありがとうございます。
申し訳ありませんが、お客様の投票の記録に失敗しました。もう一度試してください。
違反を報告
レビュー を日本語に翻訳する

C. R. Tsua
5つ星のうち5.0 An instant classic
2020年4月17日に英国でレビュー済み
Amazonで購入
Brilliant film about the last emperor of China, whose life is tragic as it is ludicrous. Caught in the cross-roads of massive change, the once ever powerful Manchu Qing Dynasty becomes a mere pawn and puppet to the major world powers. Puyi is at the centre, being moved and controlled, not only by real powers and might of others, but by his self-belief/delusion that he has any meaningful power at all.

KG
5つ星のうち5.0 Like Bertolucci's earlier "1900", a film full of great achievement and some real flaws
2012年7月13日に英国でレビュー済み
Amazonで購入
There is some interesting controversy about aspect ratios and cuts with various
releases of the film. The Criterion releases have been reformatted from
the original 2:35 to 2:1, but it was done at the request of, and under the
supervision of cinematographer Vittorio Storaro.

Also, the Criterion BR doesn't have the longer Italian TV cut, but the
2 disc Criterion DVD does.

Then there is this 2 disc Optimum UK DVD set which has the film in
it's original 2:35 theatrical ratio (and a quite nice transfer, if not quite
up to Criterion's quality.) It also contains the longer TV cut, but in a
transfer much weaker than the Criterion DVD.

Now, as for the film itself...

I can understand someone loving "The Last Emperor" (as I do), or being
bored stiff. Visually ravishing, it is an epic film about an empty man,
the last emperor of China Pu Yi.

Raised from birth with no real experience of the outside world, trained
only to fulfill his role as a symbolic figurehead, we watch Pu Yi swept
along by the great tides of history in the 20th century east. Only
after going through ten years 're-education' at the hands of the
Chinese communists does he start to seem connected to the world and to
himself.

The film forces a lot of challenging 're-thinking'. While clearly not
forgiving the murderous excesses of the Chinese cultural revolution in
the 60s, it does show that ' at least in this specific case ' the
harshness of the Chinese communists was better for Pu Yi as a human
being than the false kindness of all those that surrounded him for much
of his life.

There are weak spots. Peter O'Toole - who I usually love - is at his
most self-consciously theatrical as Pu Yi's western tutor, a tone that
makes it feel like he's in a different film. Some scenes feel like pure
exposition, with characters having conversations only so we the
audience understands historical context. And it's sometimes hard to
stay fully connected to a 165 minute epic about an empty man (although
'Citizen Kane' could be looked at that way).

But in the end, when Pu Yi finds some measure of happiness and
wholeness as a simple gardener, there is a fascinating feeling of deep
emotional reward for much of what felt flat earlier.

The Italian TV cut is almost a full hour longer than the feature
version (which Bertolucci is now said to prefer), I find each have
different strengths. I agree that the longer version is a bit "more
boring" to quote the director himself, but it also fills out the story
in important ways. By giving us more information about Pu Yi's
childhood, and time in prison (even if some of those scenes do feel a
bit clunky with exposition) his character feels much more fleshed out,
less of a cipher. More a man, less a symbol. And some of the important
changes both in the story and in his personality feel less sudden or
confusing. Probably my personal 'perfect' version would split the
difference, but I was very glad to see this alternate cut.
続きを読む
7人のお客様がこれが役に立ったと考えています
役に立った
フィードバックを送信中...
フィードバックをお寄せいただきありがとうございます。
申し訳ありませんが、お客様の投票の記録に失敗しました。もう一度試してください。
違反を報告
レビュー を日本語に翻訳する
その他の国際レビューを読み込む

Londonirish79
5つ星のうち5.0 The Last Emperor
2013年2月16日に英国でレビュー済み
Amazonで購入
Based on the true events of china at the begining of the 20th century and the unready little boy who would become Emperor of china and its terbulent fight from empire to republic.Henry Puyi or Manchu Aisin Gioro as he was also known 7 February 1906 - 17 October 1967)tried everything too retain power and even setting up a puppet state supported with the assistance of the japanese Empire,A State called Manchukuo that was in exsistance from 1934 - 1945,trying too flee Manchukuo he was captured by Soviet paratroopers and imprisoned in china and finally released after being re - educated by the Communist Chinese Government.Excellent film and great historical film.10 out of 10.
続きを読む
1人のお客様がこれが役に立ったと考えています
役に立った
フィードバックを送信中...
フィードバックをお寄せいただきありがとうございます。
申し訳ありませんが、お客様の投票の記録に失敗しました。もう一度試してください。
違反を報告
レビュー を日本語に翻訳する

Ian B.
5つ星のうち5.0 LAST EMPEROR - a five star film
2017年11月13日に英国でレビュー済み
Amazonで購入
An exceptional film; in an amazing setting. A powerful 'real' drama; not just of one person - but of a whole nation in turmoil.
Well worth watching again. In the 'west' many of us don't know much about the history of China...
続きを読む
1人のお客様がこれが役に立ったと考えています
役に立った
フィードバックを送信中...
フィードバックをお寄せいただきありがとうございます。
申し訳ありませんが、お客様の投票の記録に失敗しました。もう一度試してください。
違反を報告
レビュー を日本語に翻訳する

Andrew Ross
5つ星のうち5.0 Simply brilliant
2012年11月28日に英国でレビュー済み
Amazonで購入
This is a great movie dramatizing a great story. A man who began life as the last emperor of the greatest dynasty the world has ever seen, who was involved in some of the most exciting events of the century, and who ended up as a humble gardener in Maoist China, is a worthy subject for a good movie. Bertolucci is a good enough director to have made the most of it. And unlike some director's cuts, this one is fascinating enough to make the extra hour well spent. I cannot imagine a better screening of the life.
続きを読む
1人のお客様がこれが役に立ったと考えています
役に立った
フィードバックを送信中...
フィードバックをお寄せいただきありがとうございます。
申し訳ありませんが、お客様の投票の記録に失敗しました。もう一度試してください。
違反を報告
レビュー を日本語に翻訳する
その他の国際レビューを読み込む

N. M. Fletcher
5つ星のうち5.0 Truly Epic in scale and production.
2016年7月25日に英国でレビュー済み
Amazonで購入
Breathtakingly sumptuous bluray transfer by Criterion (region A), head and shoulders above any other releases in my collection that will now be up for sale. With literally hours and hours of extras this is a bluray to treasure.
続きを読む
役に立った
フィードバックを送信中...
フィードバックをお寄せいただきありがとうございます。
申し訳ありませんが、お客様の投票の記録に失敗しました。もう一度試してください。
違反を報告
レビュー を日本語に翻訳する

Mr. Ian Willson
5つ星のうち4.0 The Last Emperor
2009年11月6日に英国でレビュー済み
Amazonで購入
Having recently visited Beijing and The Forbidden City, I wished to know more about the last occupant of the Imperial Palace.
The film gave me a good idea of the events leading up to the declaration of The People's Republic of China, and the life of the dethroned Emperor who became plain Mr Pu Yi.
The film also gives insight to the horrors of the Japanese invasion of China, and the historical accuracy doesn't seem to have been too distorted or glamourised by the Hollywood treatrment.
I would definitely recommend this film to anyone who is about to visit Beijing, and those who would like to know more about this period in China's history.
続きを読む
役に立った
フィードバックを送信中...
フィードバックをお寄せいただきありがとうございます。
申し訳ありませんが、お客様の投票の記録に失敗しました。もう一度試してください。
違反を報告
レビュー を日本語に翻訳する