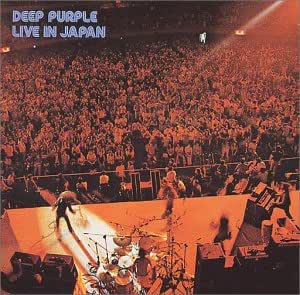 1996 digitally remastered Japanese reissue on WarnerBrothers of their 1972 live album for the label. Containsall seven tracks, including 'Smoke On The Water', 'SpaceTruckin'' and 'Strange Kind Of Woman'.

Mr Blackwell
5つ星のうち5.0 Classic Rock....
2016年10月27日に英国でレビュー済み
Amazonで購入
Deluxe edition of this seminal album,missed this edition when firts released,picked it up for a fiver,stunning, disc 1 contains the complete album,thankfully not split over the 2 discs and it sounds superb.

Peter L. Crisp
5つ星のうち5.0 Purple Patch
2014年11月18日に英国でレビュー済み
Amazonで購入
What can i say, during the 70's there were a number of live double albums that were an essential part of a bands musical landscape,
think of Lynyrd Skynyrd "One More For/From The Road, the all time classic UFO "Strangers In The Night", Thin Lizzy "Live and Dangerous" the classic Humble Pie "Performance Rockin' The Fillmore" you can also include a minor classic in it's own way, Ten Years After "Recorded Live" and now we come to one of the best live albums of all time? Although it was released under the title
"Live In Japan" in 1993 we now get the ultimate box set, this was Deep Purple at their most potent and powerful everyone is absolutely on fire, an amazing snapshot of a band that were firing on all cylinders talk about "Highway Stars". Huge
続きを読む
8人のお客様がこれが役に立ったと考えています
違反を報告
レビュー を日本語に翻訳する

Janet Austen
5つ星のうち5.0 The quintessential DP album
2009年9月22日に英国でレビュー済み
Amazonで購入
This album being a creation of the 70s, and me being 46, means I was just a lad when I first heard it. I can't say I appreciated or understood it then. I would have ignored it but for the fact that Ian Paice had a house (where his father lived) directly opposite my parents' house. So I returned to the album over the years and, by the time I was in late-teens, I finally "got" what the album was about.

The album is a work of genius. For all its fluffed piano-playing and amplifier feedback, it is one of the few live albums I've ever heard that actually "feels" live. It has real energy and rawness to it, all of which feeds into the performances of each member of the band. The band itself was reportedly at the pinnacle of its performing power; certainly the way the members play gives every impression that they were absolutely going for it from start to end. I still reckon the vinyl LP sounds better than the CD, but that's subjective and of course debatable. Paice's lengthy drum solo has been attacked by some, but the very fact such a self-indulgent solo made it onto the album is part of what makes it special and different.

The "live" album formula has been diluted over the years into chopped-up and lifeless collections of hits, but Made In Japan remains a pure "live" experience, and a record that, 39 years on (it's 2011 as I write) is still regarded by many, and by me, as the finest of the genre.
続きを読む
6人のお客様がこれが役に立ったと考えています
違反を報告
レビュー を日本語に翻訳する

hallaiged
5つ星のうち2.0 Rose/Purple Tinted Vinyl ;0)
2019年7月8日に英国でレビュー済み
Amazonで購入
Not as good as I remember as a teenager.
Performances are sublime, but recording is flat and lifeless.
Unusual for Japan, as they are so particular.
Perhaps later remasters are better?
Machine Head anniversary remaster sounds awesome, (remixes not so good.)
Will stick to studio stuff.
続きを読む
1人のお客様がこれが役に立ったと考えています
違反を報告
レビュー を日本語に翻訳する
すべてのレビューを参照します
Amazonプライム会員ならお急ぎ便、日時指定便が使い放題
さらに、映画もTV番組も見放題。200万曲が聴き放題 。クラウドに好きなだけ写真も保存可能。
> プライムを無料で試す