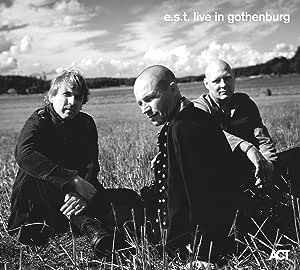 Brian Whistler
5つ星のうち5.0 E.S.T. Delivers one their most powerful and consistent live concert recordings
2019年11月3日 - (Amazon.com)
Amazonで購入
Just when you thought there couldn’t possibly be anything left in the vaults, ACT digs up one of EST’s best live recordings of their entire career. Consisting of mostly tunes off of From Gargarin’s Point of View and Good Morning Susie Soho, on this 2008 live show, the band attacks these tunes with gusto and reshapes them into something completely new. I have everything the band ever recorded, including all the live stuff - this is at least as good as the double Live in Hamburg CD, but in some ways I like it better. They were having an exceptionally “on” night, especially Esbjorn, and the fearless freedom they bring to their collective improvisation is nothing short of miraculous. Their inspired invention is really something to behold. It’s a double album and there are too many highlights to mention. - The whole thing is a bodacious high wire act of a performance.

Special mention must be made of the recording quality. This is far and away the best sounding live recording the trio has ever released. The piano is crisp yet powerful. The drums are fat and in your face - The exceptional kick drum capture sounds especially huge. And the bass is perfectly round and clear, and when Dan Berglund goes rock star, his gritty noise is all captured perfectly. No wonder Esbjorn felt this was one of their best live recordings - truly one for the ages. If you’re an EST fan, don’t hesitate to get this one - this is no cynical ploy to grab a few more dollars from the band - EST was always best live and this is perhaps one of the defining concerts by a band at the peak of its powers.