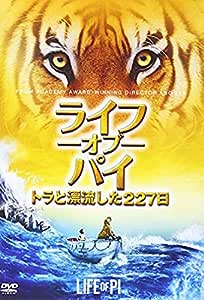 Denise Howard
5つ星のうち5.0 Visibly Stunning
2020年11月30日に英国でレビュー済み
Amazonで購入
I have made a promise to myself concerning this film if I ever have the possibility to see this film at the cinema, and also have the luck to see it in 3D I will try my hardest to accomplish it. I remember watching this film originally from the TV and being so mesmerised I went and purchased the Blu-ray straight away from Amazon. I have recently re-watched the film and once again had such joy watching the film.
Always very reluctant to watch films that have been adapted from books but this really intrigued me because of the complexity of the story, how will the extraordinary elements of this story be captured on film, and there was going to be a big need of visual effects in this film would they be a good standard
Nothing prepares you for the utter sublime art-evoked CGI. The character of Tiger is amazing in its realism and the vibrancy and colours used in the movie are breath-taking; it truly is a feast for the eyes. This is the reason I want to now see it on a huge screen because if it blows you away on a TV then it would awe-inspiring on a larger scale the cherry on the top would be seeing it in 3D too.
I really need to express how impressed I was with the young actor Suraj Sharma who plays Pi Patel. He was a complete unknown and what that young man put himself through for this film deserves accolades. The special features on the Blu-ray has a fantastic documentary concerning the finding of the lead character and how he was prepared for this role. And also a documentary of how the special effects were made too.
The film won 4 Oscars Best Director for Ang Lee, Best Cinematography, Best score and yes best effects.
Would suggest you read the book by Yann Martel before watching the film because you understand some of the spirituality more in the book... but that is a more personal opinion, if seeing the film first, do read the book too, it also is a high caliber work of fiction and imagination, both together enriches each other. And maybe one day you too will be in a cinema watching this dream of a film on the big screen
続きを読む
違反を報告
レビュー を日本語に翻訳する

Mazza
5つ星のうち5.0 Visually stunning cinematic experience, and thought provoking
2013年7月17日に英国でレビュー済み
Amazonで購入
The Life of Pi was well worth the wait. I've watched it twice now, and is one of those films you will never tire of. Ang Lee has brought us many great films, but this must be one of his best works ever. It is not only visually stunning, but also will leave you wondering. Was it all an allegory?
続きを読む
39人のお客様がこれが役に立ったと考えています
違反を報告
レビュー を日本語に翻訳する

Valerie J.
5つ星のうち5.0 Magical from start to finish
2013年9月28日に英国でレビュー済み
Amazonで購入
The story goes: A Canadian writer (Rafe Spall) has been told that an Indian called Piscine 'Pi' Patel (adult Pi = Irrfan Khan), who lives in French Canada, has a wonderful story to tell. Piscine tells the writer how he came to have a name which has nothing to do with mathematics. He tells of his childhood in Pondicherry, India, how other children ridiculed Piscine's (age 5 Gautam Belur, age 11/12 Ayush Tandon) name, and how his father, a businessman, decided to create a zoo. However, in time the zoo can no longer be afforded and the animals are to be sold in Canada. The family and animals are travelling there on a cargo ship but it's shipwrecked when a storm brews up. The teenage Pi (Suraj Sharma) survives the disaster and is afloat in a lifeboat together with an assortment of animals including a feisty Bengal tiger called Richard Parker.

Of all the aesthetically pleasing movies I have seen Life of Pi (2012) has to be up there with the best. I watched this on a Blu-ray and from the opening moments I felt as if I were almost watching it in 3D. The colours are exquisite, the characters seem to stand out from the screen, and the attention to detail was amazing; for example, at the beginning during the opening credits, we see a monkey swinging in a tree and then a letter from one of the names onscreen drops and swings. It goes without saying that the CGIs and special effects were outstanding. Truly, although my Blu-ray collection is not yet extensive, Life of Pi makes the others seem to be far from High Definition.

I began watching Life of Pi (2012) with not the slightest idea of what the film would be about other than a youth and a tiger being adrift at sea. I have not, as yet, read the book by Yann Martel. Some reviewers have written spoilers for this movie, revealing the conclusion of the movie. No spoilers here. Watch and be surprised by adult Pi's revelations, as I was.

If you buy the Blu-ray (or DVD) be sure to watch the extras about how the movie, which took 4 years to make and cost approx. $120 million, was made. Fascinating stuff. A real tiger called King was involved in the making of this movie and the real tiger is cleverly used in the movie together with a computer generated tiger. It's not easy to tell which is which and the director, Ang Lee, was fooled when shown CGI images of the tiger before the film was finalised. In the extra footage, we see close up photographs of the face of King and the CGI (computer generated image) side by side and the latter is incredibly realistic. The CGI tiger was slightly larger and, to me, looked a bit more friendly! The extras are very informative about the making of the film, of finding the young actor, Suraj, who had never acted before. I strongly recommend watching the movie first though because once you discover how it was all made then the movie might lose some of its magic for you. This is an interesting webpage that you might find interesting about the making of the movie but, again, I wouldn't want to see it before I'd seen the movie: fxguide.com/featured/life-of-pi/

Something that very much interested me was that Ang Lee and the Life of Pi movie team utilised the knowledge and experience of Steven Callahan, who was adrift at sea on a raft for 76 days after his sloop capsized, and bore hunger and heat while being attacked by sharks and being overlooked by passing ships. Adrift: Seventy-Six Days Lost at Sea, available at Amazon. Another thing that caught my attention and let me know Pi had arrived in the Caribbean was the flying fish. They are the national dish of Barbados. A wonderful moment, when the fish had 'flown' by with a predator swimming behind them, was that Pi was covered in fish scales.

While the movie is rated PG, I think some of the scenes are quite harrowing and really are not suitable for children, especially younger ones.
続きを読む
10人のお客様がこれが役に立ったと考えています
違反を報告
レビュー を日本語に翻訳する

M. West
5つ星のうち5.0 Wonderful film.
2018年3月4日に英国でレビュー済み
Amazonで購入
What a beautifully acted and crafted film this is. Despite seeing the trailer several times, I was never convinced this film would be my kind of thing but a friend recommended it so I gave it a try. Transfixed from beginning to end and having watched it on my own, I watched it again a few weeks later with my wife, this time in 3d and enjoyed it as much as the first time. My wife also loved it. If, like me, you are not sure, I can only say grab a copy, sit back with a nice glass of tipple and some munchies and enjoy a very clever film. If you are lucky enough to have a big screen, all the better because the colour and effects will just burst out. 10 put of 10 to all of the actors, but I must especially give mention to Irrfan Khan in his portrayal as the older Pi, just faultless.
続きを読む
1人のお客様がこれが役に立ったと考えています
違反を報告
レビュー を日本語に翻訳する

dix-neuf
5つ星のうち4.0 Amazinf effects
2017年9月16日に英国でレビュー済み
Amazonで購入
This is a great film with amazing effects. There is a twist at the end that to be honest probably reveals what the film was really about and I would probably have preferred not to see the ending and left it ending a few minutes earlier as the possible explanation puts a different light on the film but you could just ignore that. However a great film but probably not for young children although there is no blood so perhaps a child might not appreciate that something died but to an adult mind it is obvious what has happened, there were a few animals at the start of the journey but by half way through only the tiger and the boy are left and you can probably guess what happened to the other animals. But a very good film with amazing effects
続きを読む
1人のお客様がこれが役に立ったと考えています
違反を報告
レビュー を日本語に翻訳する
すべてのレビューを参照します
Amazonプライム会員ならお急ぎ便、日時指定便が使い放題
さらに、映画もTV番組も見放題。200万曲が聴き放題 。クラウドに好きなだけ写真も保存可能。
> プライムを無料で試す