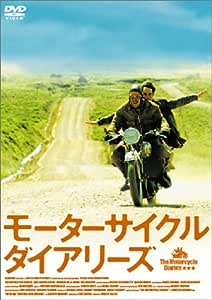 Throda tzen
5つ星のうち4.0 “The Plan: 8000 kilometres in four months.” [opening Narrative voice-over]
2018年7月10日に英国でレビュー済み
Amazonで購入
This 2004 adventure drama spans from December 1951 to August 1952 as Ernesto ‘Che’ Guevara de la Serna and his older friend Alberto Granado attempt to travel Latin America on a temperamental old Norton 500cc motorbike.
Taking information from ‘The Motorcycle Diaries’ and other sources, this does a good job as an entertaining drama and the 2 hour length passes as though just one. However, events are taken out of sequence, characters amalgamated, events shifted onto others or changed for effect and politics is heavily placed. The main issue is the film shows heavy involvement with the ‘indigenous’ population, the reality of the diary shows the opposite that for the most part he was very disparaging of them and they barely communicated and those who did were usually skilled or professionals. Where this is good is that it brings out the tensions between the travellers, something that the diaries tries to hide.
After an advert for ‘film 4’ the single disc goes to main menu offering play, scene index and extras [deleted scenes, cast & crew interviews, featurette, behind the scenes, Alberto Granado interview, trailer]. The three minute interview with Alberto is worth watching. Rated 15 this has a lot of swearing and some adult sexual references but there is generally little else to really offend. My advice, watch this as a movie for entertainment, but, if you want to learn about Che, read the diary as in that he exhibits many ‘reactionary’ tendencies, not those of the revolutionary icon he became.
続きを読む
2人のお客様がこれが役に立ったと考えています
違反を報告
レビュー を日本語に翻訳する

Thespionic
5つ星のうち4.0 Superb Film & Not To Be Missed
2015年2月3日に英国でレビュー済み
Amazonで購入
Che is seen as many, many, things? Here he is in his early life - aged just 23. He would live just another 16 years, before being executed, whilst on another sortie of his in Bolivia.
The film indicates that his philosophies were developing during this trip.
This whole film is quite iconic in its self -the cinematography is wonderful. Especially the scenery in Peru and also the cities, towns & villages that they pass through, it's just awesome. The film is full of wit but make no mistake, this 8 month journey still comes across as extremely arduous.
It starts in Buenos Aires, Argentina, - then across the Andes to coastal Chile, the Atacama Desert, the Amazon in Peru, Machu Picchu, Bolivia, Columbia and finally Caracas in Venezuela.
His friend and co-traveller, Alberto Granado, is shown in real life here at the end of the film, along with some superb black & white shots of the locals that they met along the way - these pictures are very moving and quite stunning.
This is a very touching film - it's not Che the `revolutionary' but it is a film IMHO that everyone should watch as it leaves its mark and gets better on further reflection.
続きを読む
2人のお客様がこれが役に立ったと考えています
違反を報告
レビュー を日本語に翻訳する

Azimuth500
5つ星のうち5.0 The Making of a Revolutionary
2012年12月24日に英国でレビュー済み
Amazonで購入
Ernesto 'Che' Guevara is a medical student still living with his mother, father and siblings in their home in Buenos Aires when this story begins. At vacation time, he and his friend embark on a journey by motorcycle across South America. What to the friend is a laugh, a riot and a chance to get laid, to Ernesto is a sequence of situations through which his understanding of his people, their hopes and aspirations, their struggles and triumphs, is brought to maturity. The elements of what were to become 'the international revolutionary' are so understated as to appear magical. Their frequent, friendly contacts with the ordinary people they meet along the way culminate in their reception as voluntary helpers at a Leprosy Hospital. The relationships that develop here are poignant and extremely moving and the viewer can only wish these two young men well as they progress towards the start of their respective careers. This of course is the supreme irony, considered against the way things really went for Che Guevara, first as companion to Castro in the revolutionary overthrow of the corrupt Salazar regime in Cuba, and finally his ignominious, yet tragic demise while still a young man at the hands of the Bolivian military.
続きを読む
2人のお客様がこれが役に立ったと考えています
違反を報告
レビュー を日本語に翻訳する

D. Parkin
5つ星のうち4.0 A lovely film.
2009年10月3日に英国でレビュー済み
Amazonで購入
I found this a highly engaging account of the early life and times of Ernesto Che Guevara (for it is he). Having never read the said diaries, I have no idea as to whether the film is faithful to historical detail or not, but it works on the level of being a very good road movie that charts the developing friendship between two men as they journey through South America, and their responses to the levels of inequality that they see there. The subtitles are fine, and the story pulls you along with it, planting you firmly on the side of the two travellers and with Ernesto in particular. The film is low budget and charming with it. It is certainly better than the great majority of films being churned out at present, being intelligent and well-crafted. There are occasional shafts of humour to lighten the mood, and if you get it - and I would recommend that you see it - expect to be entertained, but be aware that this is a film that makes you think, a rare commodity in today's market.
続きを読む
違反を報告
レビュー を日本語に翻訳する

AV1
5つ星のうち5.0 A must-see!
2009年7月11日に英国でレビュー済み
Amazonで購入
This film documents the road trip that Ernesto Guevera and his friend Alberto Granado went on in 1952 that would change both their lives. At the start of the film we see a youthful Doctor on a trip of adventure, by the end we see a revolutionary in the early stages as they witness the poverty and disregard for the poor and ill throughout South America.

It's a story about Che Guevara that hasn't been told before. There are only little hints towards the outcome throughout the film, it succeeds in showing another side to the man who would later become an icon. There is even some unexpected humour.

The film is very well written, the two leads are brilliantly portrayed and the direction is beautifully paced. This is a real intelligent road trip drama.