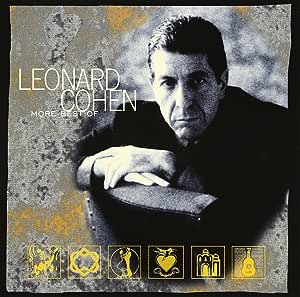 Steven Haarala
5つ星のうち5.0 o/my/god
2008年4月19日 - (Amazon.com)
Amazonで購入
This is my first in-depth experience with Leonard Cohen, so you who are accustomed to his work will have to forgive my naive enthusiasm. I have never heard anything so serious in my life. The best comparison that I can come up with is that this artist combines the intellect of Bob Dylan with the delivery of Marianne Faithfull. This is poetry; it is bleak, it is depressing, it is horrifying, it is humorous, it is beautiful. Any thinking person needs to hear this. Actually a lot more people need to hear it, but unfortunately I believe that the very ones who need to hear it are the ones who will choose to ignore it.

The tracks cover a wide (to put it mildly) range of topics done in a variety of musical styles, difficult to describe. "Everybody Knows" is a pretty accurate view of our corrupt society, delivered in an appropriately cynical voice accompanied by appropriately sinister music. "Tower of Song" is more personal, seemingly about someone who is imprisoned by his circumstances. The music, including the backup singing, sounds lighter, perhaps because the victim has accepted his fate. Another personal song, "Suzanne", is the one I was most familiar with before buying this CD. A straight-up folk song, it weaves sex, religion and social issues together to form an unforgettable portrait of a girl who is "...half crazy/but that's why you want to be there." (The funny thing is, hearing this song again reminds me of a girl I knew very well by the same name, so, Suzanne, if you are reading this, you know who you are!) Black humor is in full force as "Democracy" comes to the USA, to the tune of a military march. And you know "The Future" will be grim if the singer prefers the near past and the present (crack, the Berlin Wall, Stalin, Hiroshima) to the worse future he describes as "murder". The finality of the reality eventually arrives in "Closing Time", a mid-tempo square-dance country number which contains still more black humor: "And the whole damn place goes crazy twice/and it's once for the Devil and it's once for Christ/but the Boss don't like these dizzy heights - we're busted in the blinding lights/of closing time." I'd say that's pretty final. Ah, but the disc ends with a spoken ray of hope, in which playing the Moonlight Sonata backwards will somehow have enough power to "...end the horror...end the sorrow...and assert the majesty of creation!"

People, you just don't find much music like this on the radio or on MTV and VH1. I am happy to have stumbled upon it through a series of odd coincidences, as if it were meant to be. I know now that having heard it, I can't do without it.

spellfan
5つ星のうち5.0 Oh, that voice...
2015年5月11日 - (Amazon.com)
Amazonで購入
Where do I begin...ah, the voice, that voice! Even though it may vary from song to song as time has worked its changes, Leonard Cohen's spectacular voice never fails to impress me no matter what the song or when recorded. Then there is his poetry, which has been applied as perfect lyric after perfect lyric. Some may quibble about synthesized music as opposed to acoustic accompaniment, but my advice is to just get this cd, listen and give it a chance to captivate. Leonard Cohen is a musical genius, fabulous lyricist, and - Oh, That Voice!
続きを読む
レビュー を日本語に翻訳する