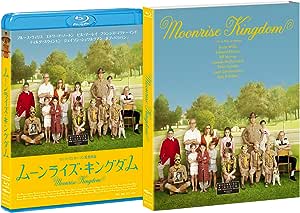 Edgar R Wagner
5つ星のうち5.0 Two young runaways in a small community and a Scout Troop in 1960's North East USA
2019年5月31日に英国でレビュー済み
Amazonで購入
An excellent, quirky, film with something of an all-star cast. Bruce Willis, Edward Norton, Harvey Keitel. They were all great. It was humourous. It was interesting. The scenery was beautiful.

If the film is set in 1965, there was one scene that I thought was very 21st Century Hollywood and would have been better left out, or at least I think so. There comes a point where the two runaways are on their own at the water's edge and she is stripped down to her bra and knickers. Fortunately, she never takes them off, but I felt uncomfortable that the two twelve year olds kissed in the way that they did. It was, in the end, arguably just on the right side of the line, but it is only just, and I felt that if they had simply gazed into each other's eyes and said how much they loved each other it would have been a better film for it.

This was in very many ways an excellent film for family viewing, but the kissing scene was not what I call "family viewing". Much like the sex scene in Terminator I, it was, in my opinion, out of place, surplus to requirements, better left out. I'm still going to give the film five stars because it really is a great film, but, arguably, it should be four stars and given a health warning because of that kissing scene.

Agnostic Duck
5つ星のうち4.0 A comedy? Quirky and offbeat certainly.
2014年2月14日に英国でレビュー済み
Amazonで購入
To be honest, I really did not know what to make of this film after the first watching.
I enjoyed it, but didn't find it that funny!!!!
The performances from the leads - Willis, Norton, Swinton and Murray are rather sublime but it's the strangely enigmatic acting from the 'young newbies' Jared Gilman and Kara Hayward that steal the show as two pubescent children taking comfort and solace in each others company as they escape the strangeness of their lives. Pursued by their respective so-called "responsible adults", (that's the funny bit, I suppose?), they desperately try to find consolation in an effort to make some sense out of their muddled lives.
I had to watch it three times before I could come to a conclusion - it is a good film; in my opinion a very thought provoking one.
Perhaps I took it too seriously? However, I found it hard not too!
Good film - not what I expected, but I think I got much more out of it because of this.

RJC
5つ星のうち5.0 Weird but rather wonderful
2017年5月11日に英国でレビュー済み
Amazonで購入
Weird but rather wonderful. You WILL watch this more than once. The characters are all pretty much dysfunctional but in that oh-so-human way that we can easily relate too. You'll recognise traits in every one of them which make them al the more endearing :-) The kids do a sterling job of leading this star-studded cast. I just love it for those times I want some light (and slightly surreal) relief. Buy it!!
続きを読む
1人のお客様がこれが役に立ったと考えています
役に立った
フィードバックを送信中...
フィードバックをお寄せいただきありがとうございます。
申し訳ありませんが、お客様の投票の記録に失敗しました。もう一度試してください。
違反を報告
レビュー を日本語に翻訳する

Malcolm McDonald
5つ星のうち1.0 Appallingly Awful.
2019年7月10日に英国でレビュー済み
Amazonで購入
Taken me 7 years to get to see it,its a shambles of a movie,absolutely terrible.The cast is to kill for but the two young leads are played but two youngsters who clearly havnt acted before,the whole film disappoints on so many levels.I don't know what the other reviewers were watching.
続きを読む
役に立った
フィードバックを送信中...
フィードバックをお寄せいただきありがとうございます。
申し訳ありませんが、お客様の投票の記録に失敗しました。もう一度試してください。
違反を報告
レビュー を日本語に翻訳する
その他の国際レビューを読み込む

Megan
5つ星のうち4.0 Great addition to a Wes Anderson collection!
2018年7月18日に英国でレビュー済み
Amazonで購入
My family and I absolutely adore Wes Anderson films, so this is ofc part of our collection. It is a very enjoyable film that is funny and witty. The only think I would say that compared to some of his other films this seems more aimed at a younger viewera audience, so does not contain some of the more adult humour that some of the other films possess
続きを読む
役に立った
フィードバックを送信中...
フィードバックをお寄せいただきありがとうございます。
申し訳ありませんが、お客様の投票の記録に失敗しました。もう一度試してください。
違反を報告
レビュー を日本語に翻訳する

Guy
5つ星のうち5.0 Top film - just get it & enjoy it.
2015年3月23日に英国でレビュー済み
Amazonで購入
Can't really add much to better reviews but we thought it was great on so many levels script, pace, casting, music, the way it was shot & the way it captures a time. Gentle Humour well done.
So much to enjoy - chuckling now remembering the conversations the young lass has with her mother & the way it was played - just great. & super quality.
A film that has stuck with us as a great experience & unlike so many that have been enjoyed & then just stuck on the shelf this has come off to be watched & really enjoyed again. Definately recommend it.

Scaroth, Last of the Jagaroth
5つ星のうち4.0 The Moon also Rises
2013年6月13日に英国でレビュー済み
Amazonで購入
Wes Anderson's passion for whimsy is again showcased in this almost unbearably quirky tale of a pair of teenage `lovers' in New England, who resort to extreme measures to be together.
Newcomers Jared Gilman and Kara Hayward are well cast as the alternative `star cross'd lovers', whilst top actors including Bruce Willis as deceptively shy police chief, Ed Norton as an insecure Scout master with hidden depths, and Tilda Swinton as a ruthless Social Worker, are imaginatively deployed and contribute to an affecting and hugely enjoyable film, which only occasionally strays into the ridiculous.

B. C. Hughes
5つ星のうち4.0 A Triumph!
2014年8月8日に英国でレビュー済み
Amazonで購入
An uplifting and original film which makes one chuckle for days afterwards. It has all the usual hallmarks of a Wes Anderson film but is very different from the The Royal Tenebaums and The Grand Budapest Hotel, keenly observed, absurd, beautifully filmed based around a young boy and his coming of age, although this story is centred on a scout camp, an island, a storm and an amazing scene at a church! The cast is scattered with the usual Wes Andesron favourite actors playing parts that are very different yet all equally memorable. A Great Friday night in movie!
続きを読む
1人のお客様がこれが役に立ったと考えています
役に立った
フィードバックを送信中...
フィードバックをお寄せいただきありがとうございます。
申し訳ありませんが、お客様の投票の記録に失敗しました。もう一度試してください。
違反を報告
レビュー を日本語に翻訳する

Ben Crombie
5つ星のうち5.0 Sweet, funny, and strange.
2014年11月18日に英国でレビュー済み
Amazonで購入
Wes Anderson knows exactly what he's doing with this bizarre wilderness adventure. If you've seen The Fantastic Mr. Fox and you enjoyed it you'll certainly like this. Everything feels spot-on in this runaway story, and it's refreshing to see Bruce Willis in such a different role to his usual. If you enjoy some eccentric story-telling and cinematography this story will entertain. I wasn't dissapointed.
続きを読む
役に立った
フィードバックを送信中...
フィードバックをお寄せいただきありがとうございます。
申し訳ありませんが、お客様の投票の記録に失敗しました。もう一度試してください。
違反を報告
レビュー を日本語に翻訳する

Bubblemunch
5つ星のうち5.0 Wonderful
2014年8月6日に英国でレビュー済み
Amazonで購入
Wes Anderson uses colour hues in this movie which is shot with the characteristic yellowy 1960/70s tinge from colour photos of that era.

Funny but poignant. A great cast. The young actors holding their own alongside the more famous actors.

Engaging at all times. Again, each scene is an individual work of art. The soundtrack sews the film together.

Another movie to watch more than once.