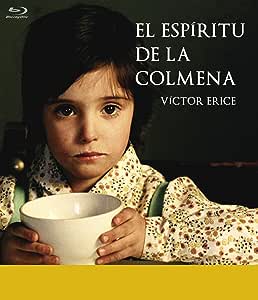 J. L. Sievert
5つ星のうち5.0 A monster stalks the land
2015年4月6日に英国でレビュー済み
Amazonで購入
Childhood is a time when the world is still formless, not yet solid, when dreams and reality overlap, when everything looks and feels magical, when our days and minds are dominated by curiosity, wonder, discovery, confusion. What is this place, this world? Why am I here and how did I come to be in it? What does it mean and where did all this beauty come from?

We look at the world as children do in Victor Erice's cinematic masterpiece, The Spirit of the Beehive, the greatest Spanish film of the 1970s.

Ana is only 7. Isabel, her older sister, is 10. They live in a remote Castilian village. The year is 1940, a time when civil war rages in Spain. The father of Ana and Isabel is a beekeeper. He is aloof and remote, not because he wants to ignore his children. Other things distress him: politics and war, perhaps, or something more personal. His wife, the mother of his children, is distant too, preoccupied. She cycles to the train station several times a week, letters in hand, not trusting them to anyone but the postman. They are love letters. She is lonely for the love of someone who is absent. The husband notices of course, but pretends not to, and she in turn pretends not to notice that he pretends not to notice. The Buddhists call this condition samsara, the wheel of endless suffering.

The bees and hives become the father's meditation. The apiary is orderly, disciplined, egalitarian. The hive works together for the good of all. Why can't man be like this? Why are his communities so weak and flimsy? Why does he think war will bring anything other than long-lasting suffering?

Ana and Isabel are alone in their world, the only people. They share it with ghosts, goblins, spirits. Isabel the wise one, the older one, has stories to tell. Ana listens with big eyes, stock still. Her sister, she knows, is an oracle.

At night Ana is afraid. Spirits wander through the darkness. She knows this because Isabel said so. Besides, she feels them. She stays under the covers of her bedding where it is safe. "Isabel" she whispers again and again in the dark. But Isabel doesn't answer. She is asleep in her own bed in the room. Ana is alone in the darkness — alone with monsters that roam the land.

Once a month the movie truck comes to the village. A makeshift screen in set up in the village hall. A projector and reels are brought in. The children sit restlessly on their wooden chairs. They are anxious, excited, worried. They have heard of the monster before, this terrible being who has come to their village. They have seen his awful face on the tattered movie poster outside. He is ugly and mean. His name is Frankenstein.

A hush when the movie begins, then delighted giggles as the images move and dance through the darkened hall. Then later, gasps, squeals, screams as the monster appears, rising like Jesus from the dead, though looking nothing like gentle Jesus. No apostles, either, no joyous weeping. Ana watches the screen, confused and terrified. Frankenstein kills the little girl. Ana can't believe it. Why did he do it? She was innocent, sweet and darling. He didn't mean to but he did it. He drowned her in the lake.

A search party from the village sets out by torchlight to find her but can't. The following day she is found. Her father carries her wet body in his arms through the village.

The world is evil. There are monsters in it. This is what Ana has learned.

Isabel drops a bombshell that night: she has seen the monster, she says. He was near a farmhouse outside the village, and also by a local river. Ana trembles at this news. But she is fascinated, drawn to the world of spirits Isabel knows so well. A deserter from the war hops a train. He jumps from the train near Ana's village. He hobbles to the farmhouse that Isabel has described. Although Isabel is a child of vivid imagination too, Ana believes everything she says. Irresistibly, Ana is drawn to the farmhouse as well. She must see the monster too. He is large, silent, injured. His leg is hurt. Ana brings him food, clothing, her father's pocket watch. But the deserter is found by the authorities and shot. The pocket watch of Ana's father is found with the body. Ana runs away when her father scolds her. She does not come back home that night.

The Castilian village now mirrors the village in the movie. The villagers by torchlight look for the lost child. That night by a local river Ana sees her reflection in the water. But when she looks again it is the monster's reflection she sees. Frankenstein stands behind her as she crouches to look at the river. She turns her head, looks up, sees him. She is tense but does not scream. He kneels down and touches her, just as Frankenstein did with the little girl in the movie.

She is found the next day. She is not dead and wet. She is asleep in a field. She is brought home and put to bed. The doctor says she must rest some days. She is traumatized by something she has seen. It will take her some time to recover.

Ana seems to, but in the end she stands at an open window at night in her house, and into the darkness she says, "It's me. This is Ana." Isabel had told her the spirits would appear if she called out to them with her name. Ana remembers.

A film this dreamy and enigmatic will have many readings and interpretations. Here are three. First, the world of dream is real for children. Second, the adult world has love, deception and anguish in it. Third, monsters may be political. A monster stalks the land and they call him Frankenstein but he may be Franco. He strikes fear into the hearts of his countrymen. He's a traitor to the spirit of Spain, a defiler of decency.

Frankensteins walk among us still. We see them daily in our media. They use violence to get their way. They murder innocents, including children. They even kill girls for wanting to go to school. Adults who cannot love and protect children are failed human beings. That so many of them should exist is one of the moral crises of our age.
続きを読む
1人のお客様がこれが役に立ったと考えています
違反を報告
レビュー を日本語に翻訳する

Artemistica
5つ星のうち5.0 An unusual film of great poetry.
2013年6月12日に英国でレビュー済み
Amazonで購入
This film I would want to see again even if rather minimal in action and of a certain crudity in technique which I felt greatly added to its charm. The darling Ana Torrent as a small girl was absorbingly an onlooker for much of the film and yet , protagonist as the story evolved. In the end nothing happened but one was left with the feeling that an undercurrent of horror was going on under the surface in a Spain of Franco's post Civil War.No information was explicit in the film about the identity of the man shot down but we read that he was a deserter of the army. The scene where the sister feigned death in a game between children was highlighted in a spectral way as there was no real reaction to Ana's screaming for help and when she came back to the room the "dead" sister was lurking to scare her again. I thought that scene was so real and it revealed how the horror so called of Frankenstein was a small thing compared with the reaity of the life of these people. I also loved the raw feeling of rural life in Spain of the 40's.
続きを読む
2人のお客様がこれが役に立ったと考えています
違反を報告
レビュー を日本語に翻訳する

P. A. Nethercott
5つ星のうち5.0 Bleak Spain. Been there. Seen it.
2017年12月9日に英国でレビュー済み
Amazonで購入
Saw this film many years ago (when it first came out!) and it still haunts me. So pleased to get it again, second hand and not cheap but very good condition and well worth it. Seller was helpful and would buy again from this source. Can't believe performance of Ana Torrent at 7 years old- but she did it again in Cria cuervos the next year - also Catherine of Aragon in the other Bolyn girl.yep, nothing happens as one reviewer put it but the bleak landscape and bleak historical period match exactly and I would thoroughly recommend this film as one to watch before you die.
続きを読む
違反を報告
レビュー を日本語に翻訳する

The tale is simple and exquisitely photographed in haunting, muted colour. The story is exposed elsewhere and I won't cover that aspect. But the girls are wonderfully played - or rather, I suppose, directed since they don't act but are just themselves, beautiful and mesmerising

If you are open to unusual stories, sensitively made, and have an eye for beauty in what are not essentially beautiful scenes you will enjoy this. And thank heavens for a film without the eternal intrusive, overwhelming 'background' music to 'enhance' the action! The silence so reflects that essence of that sort of location and the whole quality of what is, in my view, a cinematic masterpiece.
続きを読む
1人のお客様がこれが役に立ったと考えています
違反を報告
レビュー を日本語に翻訳する

Kes
5つ星のうち4.0 Good stuff!
2015年12月23日に英国でレビュー済み
Amazonで購入
Story about a young school girl, and her whimsical inner life. She is fascinated by the film Frankenstein which played at her village. It is based in 1940, just after Franco’s civil war victory. The girl’s father is pro Franco, and is emotionally distant, preferring writing about/ tending to his beehives, instead of dealing with younger wife, who has a secret lover she writes to. Ana, the young girl, has an older sister who taunts her for her imaginative gullibility. It’s this gullibility that allows Ana to believe her sister is dead, when she is actually pretending. Ana flees to an abandoned farmhouse her sister told her monsters live in. Instead of a monster she finds a Republican soldier, injured…she tends the soldier, until her father finds out and tragedy ensues.
続きを読む
違反を報告
レビュー を日本語に翻訳する
すべてのレビューを参照します
Amazonプライム会員ならお急ぎ便、日時指定便が使い放題
さらに、映画もTV番組も見放題。200万曲が聴き放題 。クラウドに好きなだけ写真も保存可能。
> プライムを無料で試す