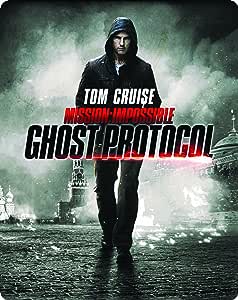 Bluepencilreview
5つ星のうち4.0 An excellent addition to the series
2018年4月28日に英国でレビュー済み
Amazonで購入
The fourth Mission Impossible movie is my third favourite after Fallout and Rouge Nation and is a great action ride. Brad Bird made his live action debut having previously worked in animation [Simpsons, The Incredibles] and brings a lot of creativity to the action pieces, especially during a car chase in the midst of a sandstorm.
Tom Cruise has an incredible sequence where he scales the Burj Khalifa tower [done practically too] which is worth the price of admission and is still great as Ethan Hunt. The team element is also strong. Jeremy Renner is probably my favourite with some good fighting sequences and strong acting, but Simon Pegg brings the humour and Paula Patton, in her sole outing in the series, holds her own. The pacing, though a little slack early on, is good, as is the score. Bird keeps the tension strong, in particular leaving an action scene in the Kremlin unscored and having the team’s technology let them down.
The plot is nothing new and the villains [including a miscast Léa Seydoux] are only serviceable [something the sequels got right] and the CGI has dated in parts but these niggles don't come close to harming a fun entry. A blast
続きを読む
4人のお客様がこれが役に立ったと考えています
役に立った
フィードバックを送信中...
フィードバックをお寄せいただきありがとうございます。
申し訳ありませんが、お客様の投票の記録に失敗しました。もう一度試してください。
違反を報告
レビュー を日本語に翻訳する

ratmonkey
5つ星のうち4.0 Cruise control
2012年8月3日に英国でレビュー済み
Amazonで購入
As some have mentioned, this is not a cerebral experience but I am unsure why anyone watching any Mission Impossible film would ever expect that it would be. This is an action thriller, dumb and brash and extremely unlikely. It is a work of escapist fiction where the audience must suspend their disbelief a little to invest in an over-the-top international espionage and terrorism plot played out by characters who are a little 'extra' human. It is a comic book film of sorts. And it is a very good one. It's fun.

One of the main reasons why this works better than the other films in the series is Cruise's portrayal. He is reined in by the director (and, I believe, by himself) in order to give the supporting cast space to act. He is still the 'hero' or main protagonist, there are no illusions about that, but he is far more likeable and grounded in this instalment. And he even has an interesting back story that ties in with Jeremy Renner's (the new Bourne!) character rather splendidly.

The plot is ridiculous and the set pieces wholly implausible but they are certainly staged with aplomb and extract much suspense from the situations, as well as even some startling twists. The scenes in Dubai where Hunt has to scale the Burj Khalifa are stunningly silly but palm-sweatingly good. Onwards to Mumbai and then back to Seattle, they certainly rack up a few stamps on their ghost passports. And it is fun to see the team working without back-up and the least amount of gizmos to aid them.

The denouement where the new team disband with new missions and the Hunt sub-plot comes to a sad but fitting resolution is a perfect way to both move on and leave the possibility of sequels open.

tone1428
5つ星のうち5.0 Mission Impossible made possible!
2012年6月24日に英国でレビュー済み
Amazonで購入
I will start with the basics, first of all this DVD (at this moment in time 24/06/12) is costing £11.99 I paid just over £6 only last week! Come on Amazon get your act together and find a standard pricing policy!
That said and stepping down from my soap box.....
We purchased it to make up our set of MI movies and....
PHEW!!!! If you are a fan of the MI movies or even if you arent then you really have to buy this one!
I will certainly not do a plot synopsis here as there is absolutely no need for one, as almost all the other reviewers have already done so.
All I really need to say is if you love your action movies this one is most certainly a MUST!
For long term fans I will point out that the usual team characters are mostly replaced by new faces and this is certainly no detriment to the movie in fact it is at times a real bonus!
In short we loved the movie and will be watching it again very soon!
続きを読む
2人のお客様がこれが役に立ったと考えています
役に立った
フィードバックを送信中...
フィードバックをお寄せいただきありがとうございます。
申し訳ありませんが、お客様の投票の記録に失敗しました。もう一度試してください。
違反を報告
レビュー を日本語に翻訳する

HeroSword168
5つ星のうち5.0 Brilliant and Fantastic
2016年7月10日に英国でレビュー済み
Amazonで購入
After watching MI 1-3 one might think what else could Tom Cruise offer. Well it turn out to be a very good movie and I did not want to leave my seat. The story or should I say the MISSIONS were IMPOSSIBLE and got worse one after the other. Two advises from me : Watch it on bluray and do not watch MI Rogue Nation until you watch The Ghost Protocol first. Hope you all enjoy the movies as much as I did. Brilliant !! Looking forward to MI 6. lol ^_^
続きを読む
役に立った
フィードバックを送信中...
フィードバックをお寄せいただきありがとうございます。
申し訳ありませんが、お客様の投票の記録に失敗しました。もう一度試してください。
違反を報告
レビュー を日本語に翻訳する
その他の国際レビューを読み込む

The picture quality is awesome, crisp, clean and with a healthy dose of filmic grain. The audio fares a bit worse I'm afraid. The problem lies in the sandstorm sequence about an hour and fifteen minutes into the film. The audio simply disappears and then comes and goes for a few minutes before finally returning. I have gone though different sets of blu-ray discs (the UK release) and they both display this problem. I not sure if I am incredibly unlucky when buying blu-ray discs, or if there is some inherent problem with this UK pressing. I am quite sure that my set-up (Denon AVR1900 Reciever, NAD T557 blu ray player, LG 47 LED TV, DLS speakers, Rel T5 subwoofer)would be sufficient to handle this disc.

Mrs. J. P. Penny
5つ星のうち5.0 Bond and Bourne seem like woosies!
2017年1月9日に英国でレビュー済み
Amazonで購入
Great film, Simon Pegg is in this one more, and has lifted the film in my opinion, amazing stunts that Tom does himself, wow, wait til you see the 'making of ' extras, that alone will blow your mind.
続きを読む
役に立った
フィードバックを送信中...
フィードバックをお寄せいただきありがとうございます。
申し訳ありませんが、お客様の投票の記録に失敗しました。もう一度試してください。
違反を報告
レビュー を日本語に翻訳する
その他の国際レビューを読み込む