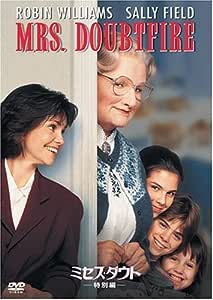 Daniel James
5つ星のうち1.0 Useless purchase of a great film
2019年4月11日に日本でレビュー済み
Amazonで購入
Why do I have a choose 1 star when I want to give it zero?!
This was a complete waste of money and time. I could only watch this film on a desktop and none of the devices (tablet or smartphone) that I had downloaded the Prime Video app on. The only thing I could see on those gadgets was 2 minute excerpt from the beginning of the film which was not a trailer as advertised.
This has put me off using Prime Video again and I will think twice (three times and even more) before suing it again.
続きを読む
1人のお客様がこれが役に立ったと考えています
役に立った
コメント 違反を報告
レビュー を日本語に翻訳する
すべてのレビューを参照します

• Every aspect of this film was pure class. I loved it.

• I cant think of no Bad Points at all, it was that good.

Robin Williams plays Daniel Hillard, a struggling out of work actor who when faced with divorce from Miranda (Field) and separation from his three children, disguises himself as an old female housekeeper in order to see them daily.

Centrally as a film it is what it is, a chance for Williams (excellent) to dress up in drag and act the goof, but boy does he do it well. In the mix is the serious aspects involving the pain of imminent divorce and separation from one's children. The script is sharp and ready made for Williams' brand of cynical witticisms, while not painting Brosnan's Stuart Dunmire (the new man in Miranda's life) as an oily snake shows good sense in the writing. The child actors are engaging and never sickly, while Fierstein as Daniel's artistic eccentric brother is gloriously colourful.

A real family crowd pleaser that turned a profit of over $400 million at the worldwide box office, it's not a film that pushes boundaries of "drag" comedy, and you don't have to dig too far for flaws. But this is often very funny and it hits the right emotional beats for the topic at hand. 8/10
続きを読む
10人のお客様がこれが役に立ったと考えています
違反を報告
レビュー を日本語に翻訳する

Jean
5つ星のうち5.0 Gr3at acting, and very funny.
2020年3月9日に英国でレビュー済み
Amazonで購入
This film is one of the funniest films I’ve watched for a long time. Robin Williams is a great actor, and takes the central role. I’ve never laughed so much watching a film as I did watching this. Its an all round family film, and I would recommend it to anyone who loves a good laugh.
続きを読む
違反を報告
レビュー を日本語に翻訳する

EAP of B
5つ星のうち5.0 Excellent film
2014年2月3日に英国でレビュー済み
Amazonで購入
If ever there was a man who couldn't fool you that were a woman, the hairy, masculine Robin Williams is it. But he plays the title role brilliantly. His accent though they say it is British is of course Scottish and not from England as portrayed, is impeccable. This is a very funny film with lots of laugh out loud moments especially when his false face gets run over by a truck and when he gets muddled up and sits at the wrong table in the restaurant. Also very sad that he has to resort to such measures to just get to see his kids. the kids are all great actors. If you want a good belly laugh see this film.
続きを読む
4人のお客様がこれが役に立ったと考えています
違反を報告
レビュー を日本語に翻訳する

J-M-Leo
5つ星のうち5.0 What a wonderful family film!
2012年12月10日に英国でレビュー済み
Amazonで購入
Of course, kids whose families are going through divorce might find this painful in some parts. But some kids may find the movie helpful because it lessens feelings of being alone or unique. Parents need to know that as funny as this movie is, it's really about the pain of separation and divorce. Serious issues such as the perception that Daniel is a bad father because he doesn't make a lot of money, and the implied criticism of careerist mother, Miranda, are buried under a lot of padding and jokes and voice impersonations.
This movie is so different from other movies regarding divorce in the manner in which it deals with real human problems. Though it provides a basis for a comedy, the issue of divorce and custody is treated seriously. Irresponsible Daniel grows from the experience of looking at the world from a woman's point of view. Recommend it!
続きを読む
2人のお客様がこれが役に立ったと考えています
違反を報告
レビュー を日本語に翻訳する
すべてのレビューを参照します
Amazonプライム会員ならお急ぎ便、日時指定便が使い放題
さらに、映画もTV番組も見放題。200万曲が聴き放題 。クラウドに好きなだけ写真も保存可能。
> プライムを無料で試す