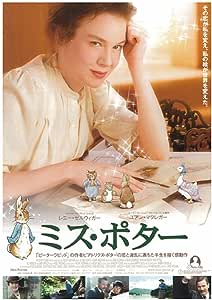 J. L. Sievert
5つ星のうち5.0 Magic never ends
2015年4月7日に英国でレビュー済み
Amazonで購入
When I was boy I would draw characters from Peanuts in my notebook: Snoopy, Linus, Charlie Brown, Lucy, Schroeder and others. At first I copied them from the Sunday funnies page, but as my expertise grew their forms became mine. The copying was finished and they entered my own imagination, free from their original source.

I thought about this while watching Peter Rabbit, Jeremy Fisher and Jemima Puddle-Duck dance on the notebook pages of Beatrix Potter. How colourful and delightful they look. How sweet their forms are. And how wide-eyed and happy Beatrix seems. She talks to them tenderly and we see how dearly she loves them. All of us who were children remember this feeling. The world of the imagination was our domain. In it we were free and made the world as beautiful as we wanted it to be. It became our refuge and secret world. Which is why we rarely left it. The adults could have their world. We had ours.

The magic in all this remains with some. It remained with Beatrix Potter throughout her life. She became a woman but did not lose her girlhood. Her books were a memory of what she felt as a child, and as an adult she went back, time and again, to that emotional and imaginative world she once inhabited. Which is why the books are so fresh and timeless, as magic never ends unless one gives up on it.

Her parents worried for her. She spent too much time alone in her room or in the garden. It wasn't normal for a child, a teenager, a young woman to be so solitary. She needed to mix more, meet others, develop a social life. Otherwise what would she become if not a lonely old maid? Her parents loved her but didn't understand her. They judged her by their standards, the social standards of their day, not by her needs as a person. They didn't know she was extraordinary. They saw childish drawings on the page, not the mind of an artist who combined both beauty and ecology to transform the world into a garden.

We know how important that garden is nowadays. We feel what happens when the chain saws and bulldozers remove it from our lives and consciousness. Beatrix always knew its importance and celebrated it through the adventures and escapades of her delightful characters.

When she reached the age of 20 her parents pressured her to find a marriage partner. A clutch of potential suitors paraded past her for inspection and consideration. None would do. None were suitable. None could understand and love her. She told her parents this and they became exasperated. They didn't know what to do with her.

No matter. She had other things to think about. Her characters had lingered in her private world too long. Now she wanted to share them with others if she could. She was shy and timid about the thought of publishing but she built up her courage, wrote letters, met publishers. Most were amused by her, by the thought that a young woman could still live and think like a little girl. But she was undaunted. She knew her worth and that of her characters. She knew they had fabulous stories to tell about their lives.

She was right and finally one publisher agreed with this assessment. He recognized the potential in her art. He saw the bigger picture.

She fell in love with the man who saw her worth, who loved her for who she was. He was the brother of her publisher. Her characters delighted him, and so did she. He proposed to her and she accepted. She astonished and delighted her parents with this news. So their child was normal after all. She could love a man and accept him as her husband. What a load this was off her mother's mind.

But he died. That's how incredibly cruel life can seem. The one man who loved her and whom she loved perished. He died of leukemia before they could marry.

Beatrix took refuge thereafter in her art, characters and books. She also found peace in nature, particularly in the Lake District, that wondrous part of England she loved so well. Her family had been visiting it for years on holiday from their home in London. Now she made a momentous decision: she would quit London and move to the Lakes. No, her parents said. Yes, Beatrix said. She was a child no more. She had her own income and independence. She even had fame, as her books had given her this. She would use this, this fame and influence, to help preserve the beauty of the Lake District. From Hill Top Farm, the sheep farm she bought near Windermere, she became a conservationist. She also married a local farmer.

If her parents never quite fully understood her, upright Victorians as they were, the world did. She has never stopped being loved as the person who gave the world Peter Rabbit, Miss Moppet and Tom Kitten, and when you watch this marvelous film you appreciate her and what she stood for. The world needs more heart of the sort Beatrix Potter had. She is a treasure to all who love children, art, beauty and nature.
続きを読む
9人のお客様がこれが役に立ったと考えています
違反を報告
レビュー を日本語に翻訳する

Amazon Customer
5つ星のうち5.0 Renee Zellweger At Her Best.
2018年8月4日に英国でレビュー済み
Amazonで購入
This is a fabulous portrayal of Beatrix Potter. Everything about this film is wonderful. The way it has been made and the stunning Lake District some of it shown. This is beautifully made. All the actors take their jobs quite seriously. Watch as BP's painting's come to life. If you like Beatrix Potter you will love this film. I will not tell you too much. Suffice to say, this film is brilliant. Hill top is also shown. I went there some year's back. It's a wonderful film to watch. PC. 04. 08. 2018.
続きを読む
違反を報告
レビュー を日本語に翻訳する

DVD WATCHER
5つ星のうち5.0 RENEE ZELLWEGER IS A REAL TREAT
2018年4月1日に英国でレビュー済み
Amazonで購入
(Watched as a rental - but I'll now be buying it.)

A good complement to the movie Enid, by the way, the story of Noddy author Enid Blyton starring Helena Bonham-Carter,

Miss Potter is the feel-good movie to go to bed on though - Enid may give you, er... nightmares!
続きを読む
違反を報告
レビュー を日本語に翻訳する

Angharad.
5つ星のうち5.0 The DVD was a good price on time.
2020年3月10日に英国でレビュー済み
Amazonで購入
I loved the film, it was old fashioned and yet modern as well and while I learned there were some historical inaccuracies it didn't detract from my enjoyment. Didn't realise that Miss Potter bought and donated to the public such a large piece of the Lake District.
続きを読む
違反を報告
レビュー を日本語に翻訳する

Kindle Customer
5つ星のうち4.0 Miss Potter
2013年5月11日に英国でレビュー済み
Amazonで購入
This is a fantastic film. I have to admit that I bought it with some trepidation when I realised that Renee Zellweger was in it as I have only seen her in Bridget Jones. Finding her so convincing as the chain-smoking, always-drinking and perpetually single Miss Jones, I find it difficult imagining her as a children's author writing Peter Rabbit, but I was pleasantly surprised. She is fantastic. The film is basically about Beatrix Potter's life. While I cannot vouch for its historical accuracy it is nonetheless a moving film and it was interesting seeing the difficulties Beatrix had to overcome.
続きを読む
2人のお客様がこれが役に立ったと考えています
違反を報告
レビュー を日本語に翻訳する
すべてのレビューを参照します
Amazonプライム会員ならお急ぎ便、日時指定便が使い放題
さらに、映画もTV番組も見放題。200万曲が聴き放題 。クラウドに好きなだけ写真も保存可能。
> プライムを無料で試す