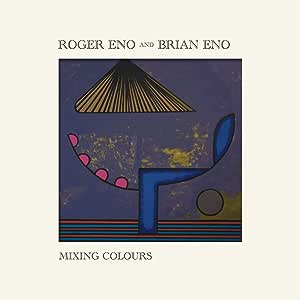 Gerard O'Doherty
5つ星のうち5.0 Enormous
2020年3月23日に英国でレビュー済み
Amazonで購入
I read once that 'ambient' music can actually change your purchasing habits, so I often stick on Plateaux of Mirror when I'm walking round the aisles at Asda or Lidl. I don't know if that's affected my grocery shopping or not, but a bit of music does enhance everyday activities.

Sadly I've been confined to a smallish space since Mixing Colours was delivered. So this is a partial review, as I feel I've not road-tested the music yet. The other thing of course is time. You can't judge a record on a few listens. I found Music For Airports kind of airless and drab for years before it started grow on me, for instance. My initial review of that would've been basically one word: "Eh, what?". Ok maybe that's almost two words. Either way, it wouldn't have been a fair one.

So ... initial impression is that this CD (and its streaming version) will be getting played plenty of times in the future. So much here that I can't wait to get back to again and again.

Standout track for me so far is "Snow". I can't help listening to it without thinking of Harold Budd & John Foxx's "When The City Stops For Snow" and Debussy's "The Snow Is Dancing", but I think that's maybe a title thing. It's an incredible composition. One of those ones where you hear it first time, then have to rewind to the start just to check - was it really that good? Then it keeps getting better and suddenly you've played it like 5 times in a row.

There are moments on this record that renind me of Roger Eno's "Voices" as well as Brian Eno's "Small Craft On A Milk Sea" and maybe "Music For Films". But only fleetingly. This project very much sounds like itself. And I'm glad I bought a hard copy as it's a) got good artwork and b) isn't in a plastic box.

jonathan akin
5つ星のうち5.0 Essential Eno!!!
2020年3月22日に英国でレビュー済み
Amazonで購入
Another great addition to the Eno cannon: beautiful, calming and lovely. I keep rewatching the videos of Celeste and Blonde which appear to have been shot from slow moving trains either looking across sunny cornfields or towards far distant hills with little fluffy clouds and blue skies.

I cannot recommend Mixing Colours enough. Great musical medication and meditation for modern day times (well that is what I think anyway)...

Middle America Electronica Fan
5つ星のうち5.0 Eno bros kick out the ambient jams
2020年3月21日にアメリカ合衆国でレビュー済み
Amazonで購入
Another dreamy ambient work, bringing out the best in the Eno bros. If you’re a fan, don’t hesitate to add this to your collection. All other fans of quiet, contemplative music should give Mixing Colours a listen, too. Intelligent ambient, a great antidote to troubling times.
続きを読む
2人のお客様がこれが役に立ったと考えています
役に立った
フィードバックを送信中...
フィードバックをお寄せいただきありがとうございます。
申し訳ありませんが、お客様の投票の記録に失敗しました。もう一度試してください。
違反を報告
レビュー を日本語に翻訳する