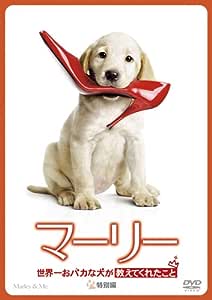 A.Sturgess
5つ星のうち3.0 OK but the book is much, MUCH better
2012年2月28日に英国でレビュー済み
Amazonで購入
I read the book before seeing the film and so I was surprised that two of the key episodes in the book which are guaranteed to make you burst out laughing were omitted from the film. These were the "I think we just met Dad" episode and the nappy-sniffing theme. You'll need to read the book to understand their importance, but in missing them from the film, huge opportunities for greatly humourous scenes were lost.

In most other respects, the book is pretty faithful to the book but Marley's sheer lunacy never really leaps out of the screen. Wrecked garages are seen, and shredded furniture, but it all seems rather dull in comparison to Grogan's quality writing in his book.

But, for me, the biggest flaw in the film is the casting of Aniston and Wilson. They were just too safe and obvious a choice. Of the two, Aniston does the better job - better than I expected - especially during the parts of their lives when Jen Grogan lost the first baby and then, later on, when post natal depression took over her life.

Owen Wilson seems to sleepwalk and mumble through most of the film. His performance is almost flat at times and, as is so often the case in his films, he only seems to be Owen Wilson. He seems to be in the sort of character and casting rut that trapped (and still traps??) Hugh Grant. Never once did I see Wilson as Grogan whereas Aniston did occasionally manage to break out of her overly-familiar 'Friends' mode. But on balance you don't ever really see real people who lived a real life with a real and really eccentric dog. You see two actors mostly being themselves.

As for Marley? The various dogs who take his part do a good job and thanks to some exellent trainers, there are many funny scenes - but nothing as laugh-out-loud as happens when you read the book.

So in the end, my advice is - read the book. It's hugely better than this rather limp version and how on earth could they miss out the 'Dad' and 'nappy' scenes? The 'Dad' scene in particular, and what happened before it, is essential to understanding what on earth makes Marley into that 'worst dog in the world'.

Travels with Charley: In Search of America (Penguin Modern Classics)

Marley wasn't the only 'worst dog in the world' though ...

DUDLEY: THE WORST DOG IN THE WORLD.

The latter book has now been updated -

Anne B
5つ星のうち5.0 A good laugh
2012年7月17日に英国でレビュー済み
Amazonで購入
Marley and me is a delightfull narrated account of one man and his dog gradually morphing into one couple and their dog and finally one family and their dog. The issue of the death of the dog, the saying of their goodbyes is sentively portrayed as is the marital relationship and ups and downs of married life. Her initial struggle to become pregnant, the grief of the miscarriage is handled realistically. All in all this is an excellent film about the decisions involving careers and family life, the choice of full time parenting being usefully explored. Along with many important issues is a good dose of comedy, mainly provided by Marley (the golden labrador). I have watched this DVD three times and it still makes me laugh. The only criticism I have is the sound track - it is quite hard to pick up on the American accent, so inevitably some of the dialogue is lost on first viewing, which is a pity.
続きを読む
違反を報告
レビュー を日本語に翻訳する

Carol Bradford
5つ星のうち4.0 MARLEY AND ME DVD
2017年10月24日に英国でレビュー済み
Amazonで購入
This was purchased as a gift for a friend. The DVD arrived in pristine perfect condition as described. It is a heart-warming film about a dog called Marley and the trials and tribulations of owning a frolicsome furry dog, a must for any dog lover
続きを読む
違反を報告
レビュー を日本語に翻訳する

Mary Carnegie
5つ星のうち4.0 Is there an Oscar for dogs?
2014年8月16日に英国でレビュー済み
Amazonで購入
Not two of my favourite human actors, but the dogs (all 22 of them) who played Marley at different ages steal the show. His antics provide some hilarious moments - like when he's expelled from puppy class - and his inevitable death scene had both me and my husband with tears running down our cheeks.
The book's probably better, but, who cares?
続きを読む
違反を報告
レビュー を日本語に翻訳する
すべてのレビューを参照します
Amazonプライム会員ならお急ぎ便、日時指定便が使い放題
さらに、映画もTV番組も見放題。200万曲が聴き放題 。クラウドに好きなだけ写真も保存可能。
> プライムを無料で試す