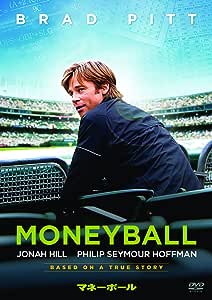 The films is as much about misunderstanding people as about baseball. Its about seeing the bigger picture, not just about how your team looks. Moneyball is an enthralling film that will keep you hooked all the way through. You don’t even need to like baseball in any way, or know anything about it to enjoy this film. Brad Pitt is just fantastic as the passionate and driven GM. Jonah Hill too. If you hate sports, forget its about baseball, this is drama at its best. Highly Recommended.
続きを読む
4人のお客様がこれが役に立ったと考えています
違反を報告
レビュー を日本語に翻訳する

Tombo
5つ星のうち5.0 You don't have to care about baseball to like this film (but it helps)
2020年2月18日に英国でレビュー済み
Amazonで購入
This film was both entertaining and thought-provoking, especially if you follow professional baseball. It was a revelation to me so I went out and also bought the book, which was just as compelling. Brad Pitt can act too and was totally convincing as the erratic but original baseball exec. Billy Beane. If you are interested in sports it helps but the film stands on its own as a good story. Based on true events and on the book of the same name.
続きを読む
違反を報告
レビュー を日本語に翻訳する

Mark Pack
5つ星のうち5.0 Great fun even if you don't like baseball or statistics
2014年10月19日に英国でレビュー済み
Amazonで購入
You don't have to be a baseball fan or a spreadsheets lover to enjoy Moneyball. The story of how an under-resourced team found a way to be smarter than their bigger and richer rivals has an appeal that works even if you're not sure what a strike is and aren't moved by the idea of someone pouring over data to find a different way of looking at things.

That is a large part of why Moneyball, the movie of Michael Lewsis's book about the Oakland A's baseball team, is such an enjoyable movie.

Add in some great acting, a script written by someone (West Wing's Aaron Sorkin) who values words rather than seeing them as placeholders between special effects, great editing of footage and a nicely judged music score and you have a wonderfully enjoyable movie. Even if you don't like baseball.

Often the extras on a DVD are of limited value, but in this case - save for the one that give you the chance to watch Brad Pitt sitting laughing for several minutes - the extras add greatly to the film, both in explaining the context and (in the case of the deleted scenes) rounding out the characters nicely.