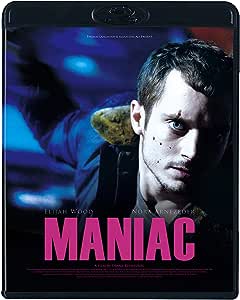 Throda tzen
5つ星のうち5.0 Frightengly Disturbing
2014年5月26日に英国でレビュー済み
Amazonで購入
This is not a film you can love but as a horror movie it does it's job terrifyingly well. It's not going to make you jump out of your seat -it's not that type of film. Instead you tend to see things from the point of view [POV] of Frank [Elijah Wood], a mentally disturbed individual whose gone seriously off the rails following his mothers death. The film opens as we watch two girls hail a taxi in a rundown part of the city. One gets in, the other walks on. She notices a vehicle across the road and we realise were looking through Franks eyes. This sets the scene for the rest of the movie as we tend see things the way Frank sees them and we get to experience his torment as he tries to fight his inner demons.
The film is gory in places, but unlike most it doesn't rely on blood and guts to keep the viewer fixed, instead it's almost as though you -the viewer are committing the crime and that's what's so disturbing -that first person POV [very reminiscent of Strange Days]. It isn't even a fast paced movie, the pace is very much a stroll but it all adds to the tension and Elijah Wood plays the part to perfection.
I'd actually like to rate this as a 1 star because I found it disturbing on so many levels, yet it does what a good horror movie should, hence the 5 star rating. It's not a brutal film [like Wrong Turn], does not revel in dismemberment or slow torturous deaths and doesn't play on the victims fear, it's just 'clinical' and detached in the kills and that's part of its 'horror', it all seems so plausible.
The single disc DVD comes with limited features comprising Play, scene select, set up and two extras; interviews and the trailer, so the disc itself is nothing special, but despite my reservations I'd have to recommend this if you're into the slasher/homicidal maniac type films but it won't please all as much of the horror is psychological being in your own mind.
続きを読む
4人のお客様がこれが役に立ったと考えています
違反を報告
レビュー を日本語に翻訳する

Amazon Customer
5つ星のうち4.0 A psychological thriller about a serial killer.
2019年2月9日に英国でレビュー済み
Amazonで購入
Not for sensitive people. This thriller follows a deranged serial killer as he kills and scalps women. The events are seen almost entirely through the killer's point of view, brining the viewer into the monster's mind. Suspense and plenty of gore, this picture is a must for horror fans.
続きを読む
1人のお客様がこれが役に立ったと考えています
違反を報告
レビュー を日本語に翻訳する

Paul M.
5つ星のうち5.0 Brilliant, you won't be disappointed.
2016年7月6日に英国でレビュー済み
Amazonで購入
One of the best horror films that I have seen in a long time don't let the star of this film put you off , it's a must buy for any horror fans.
続きを読む
2人のお客様がこれが役に立ったと考えています
違反を報告
レビュー を日本語に翻訳する

Sophie Kerr
5つ星のうち5.0 Not super gory but very good!
2018年6月10日に英国でレビュー済み
Amazonで購入
Huge horror film fan and this is up there with my all time favourite films.
続きを読む
違反を報告
レビュー を日本語に翻訳する

Mr. M. Moore
5つ星のうち4.0 Nuts...
2013年8月14日に英国でレビュー済み
Amazonで購入
This film is simply crazy, tagged as a 'Modern horror classic' for once they are right! I haven't seen a film in so long that has left me feeling uneasy but this did. Elijah Wood as a maniac... genius bit of casting. The 'point of view' focus of the film might annoy a few people but I found it added to the overall feel and look of the film. If you want a little freak out... watch this movie!
続きを読む
4人のお客様がこれが役に立ったと考えています
違反を報告
レビュー を日本語に翻訳する
すべてのレビューを参照します
Amazonプライム会員ならお急ぎ便、日時指定便が使い放題
さらに、映画もTV番組も見放題。200万曲が聴き放題 。クラウドに好きなだけ写真も保存可能。
> プライムを無料で試す