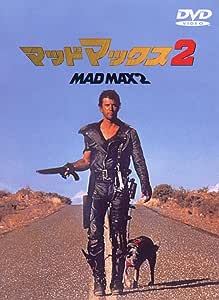 Trivia.
1) Mel Gibson only had 16 lines of dialogue in the entire film.

4)Humungus was originally revealed to be Max's partner Jim Goose but George Miller eventually decided against this idea.

Synopsis.
Following the road-side slaughter of his family, ex-cop Max (Mel Gibson) roams the post-apocalyptic landscape alone. Reluctantly taking a pit-stop at a desert-set fortress, Max is gradually persuaded to help protect the people inside it & the commodity that makes it a prime target for marauding gangs - fuel.

Timelord Thoughts.
Mad Max 2 is one of my all time favourite movies, from it's superb narrative opening about a ravaged apocalyptic world gone mad to it's stunning action packed climax, this movie masterpiece delivers breathtaking action sequences, superb performances by the cast & contains a very important message about the fate of humanity.

Mel Gibson reprises his role of burnt out ex-cop Max Rockatansky clad from head to toe in leather & steel armed with a sawn off, double barrelled shotgun & a dog as Max roams the wastelands in his black V8 Interceptor scavenging for precious resources, food, water & fuel while battling against psychotic marauders.

Gibson's superb performance features just 16 lines of dialogue but he depicts through facial expressions & body language the emotions his character is feeling, Gibson has the ability to allow us to feel Max's inner turmoil of pain & loss as the haunting memories of losing his wife & son burn deep within him.

Bruce Spence adds great charm & quirky charisma as The Gyro Captain who eventually aids Max in his deal to help the community bid for freedom & a new horizon, Emil Minty gives a memorable performance as the Feral Kid, a boy who lives in the wasteland near the refinery settlement who speaks only in growls & grunts & defends himself with a lethal metal boomerang, Mike Preston plays Pappagallo, the idealistic leader of the settlers in the barricaded oil refinery & a character who has kept his humanity in a world gone mad & the sexy
Virginia Hey features in a small role as the Warrior Woman, who initially distrusts Max, the only thing standing in the settlers way is a group of psychotic marauders led by the feared Humungus who surround the oil refinery & want the gasoline for themselves.

Writer/Director George Miller has created such a believable broken down world in Mad Max 2, a world stripped away of town's & cities as humanity has unevoled to a near primitive state as society has become ravaged to a desolate wasteland due to a nuclear war, Miller doesn't hold back on showing us the horror aspects of this savage apocalypse as bodies are broken, impaled, crushed & splattered in the bloodiest adrenaline fuelled car chases ever seen on screen.

George Miller's direction shows such ferocity & intensity in several jaw dropping action sequences, every stunt was done for real in camera with no computer trickery & the results are simply breathtaking, the 13 minute chase towards the movies climax is still one of the best action sequences I have ever seen & i still get goosebumps everytime I watch it.

Overall, 'Mad Max 2: The Road Warrior' is a cinematic masterpiece that vastly improves upon the original movie, Gibson performance impresses as the battle scarred road warrior who's last bit of humanity burns slowly away as writer/director George Miller merges a uncompromising look at a post apocalyptic barren, dangerous & lawless world were one must scavenge for survival & in doing so delivers breathtaking death defying action sequences that are better than anything Hollywood churns out nowadays.

Amazonreviewer
5つ星のうち4.0 The Best a Max Can Get
2019年1月14日に英国でレビュー済み
Amazonで購入
This is genuinely very good (not brilliant) release of an iconic film. Like the film this blu-ray edition is lean and does everything it needs to excellently. I won't review the actual film as there are better sites and places to do that. You don't get loads of extras in the form of interviews, retrospective documentaries or extra footage - there's a trailer, introduction and commentary track - but what you do get is a fantastic picture (phenomenal given it was filmed 1980/81), awesome sound and all of it consistent. For me, if you love the Max franchise and haven't got this already then you need to buy it or one of the boxsets that incorporate it. The missing star is due to a lack of extras on this release that I believe this film deserves.
続きを読む

Austin haigh
5つ星のうち5.0 CLASSIC action
2016年8月13日に英国でレビュー済み
Amazonで購入
Mad Max was a five star film, and Mad Max 2 Road Warrior is also a five star film. It's very hard to say which I prefer because they are both so different. Mad Max was raw, story driven drama, with great action. Yet Road Warrior zooms way into the future and gives us a post apocalyptic nightmare, in an amazingly polished production. Mel Gibson has never been or looked better and the story/direction is the closest anyone has got to Sergio Leonne (in my eyes the master film maker). Great action, great set pieces and a monster vision. Okay I've decided, The Road Warrior just edges it. But it's a close call because they are so different, so it's not like comparing say Godfather parts I and II. This is up there, along with Die Hard, Lethal Weapon and Commando as one of the very best action movies ever made and probably one of the best sequels ever. Bravo George Miller, glad to see you return to the series
続きを読む
1人のお客様がこれが役に立ったと考えています
役に立った
フィードバックを送信中...
フィードバックをお寄せいただきありがとうございます。
申し訳ありませんが、お客様の投票の記録に失敗しました。もう一度試してください。
違反を報告
レビュー を日本語に翻訳する

s.fallout
5つ星のうち5.0 K..CHUNK K..CHUNK K..CHUNK
2015年5月10日に英国でレビュー済み
Amazonで購入
The Road Warrior (Mad Max 2).Blu-ray.
U.S import. Region free. Kinetic car chases
& motorbike madness, topped up
with a gleaming boomerang. The on screen
title Mad Max 2 pops up when played, far
better than 'The Road Warrior' and there's
no American dubbed voices. The 16:9
picture quality's tip top and apparently it's uncut,
massive thank you's to the reviewer(s) who
have kindly pointed this out. One of my favourite
types of movie, 'the post apocalyptic fallout'. This
and Raiders of Atlantis (badly want an English
language official release) are by far the best examples.
The whole film is a 'stand out moment,' the gyro captain
eating dog food, then dabbing his mouth shows
a tiny bit of dignity remains. Also the compound mechanic
who shouts "OK". Very funny. You've also got the
gorgeous Virginia Hey in it. You had me at Raiders of Atlantis.
1981 Run time: 1hr 35min.
Extras: commentary, introduction by Leonard Maltin,
theatrical trailer.
続きを読む
役に立った
フィードバックを送信中...
フィードバックをお寄せいただきありがとうございます。
申し訳ありませんが、お客様の投票の記録に失敗しました。もう一度試してください。
違反を報告
レビュー を日本語に翻訳する

AJ
5つ星のうち5.0 My Favourite Movie Maybe! Sci-Fi Road Movie Masterpiece!
2008年3月24日に英国でレビュー済み
Amazonで購入
Ive watched this film more times than any other since it was first released on VHS in 1983. It made a lasting impession on me and ive never seen it bettered by any others of its type including 1985's Thunderdome.
So many elements are combined here; SciFi, Horror, Action, Western, Revenge Thriller and combined well. Mad Max was good but this really ramps it up.
Set in a desolate and lawless future Australian outback after the fall of civilisation(post world war 3 but NOT after a nuclear conflict - the Bombs fall in the years between parts 2 & 3) the saga continues of Max Rockatansky, the embittered and battle hardened warrior of the wasteland, constantly at war with the ferocious marauders who terrorise the apocalyptic landscape. Max is the epitome of 'Hard' - clad from head to toe in leather and steel and armed with a sawn off, double barrelled shotgun, he roams the wastelands in the now iconic black V8 Interceptor. A monster of a car, armed with a self destruct device and a supercharger to leave the opposition standing - this is Max's main weapon and bringer of Death to the enemy. The plot is straightforward and really is an excuse to enjoy the absolute orgy of violence and mayhem that ensues for 90 minutes! Max goes head to head with the minions of the terrifying Lord Humungous and his Chief Warlord Wez - These are truly fearsome warriors, clad like Max in leather and iron and armed to the teeth with crossbows, blades, morning stars and gas propelled arrow guns and a vast arsenal of cars, bikes and dune buggys. Some of these guys are barely human with their berserker tactics, utter contempt for human life and total bloodlust. A good 50% of them are mohawked, particularly Wez and look like they could have come from the depths of hell!
Max, mostly for selfish reasons, allies himself with a compound of 'normal' people who find their desert fortress under perpetual siege from the Humungous and his monstrous horde. The decent folk have their own oil facility to make fuel which is now the single rarest commodity on earth - and the mohican army wants it - and arent willing to trade!
In the ensuing battles, bodies are broken, impaled, crushed, and pulped in the bloodiest car chases ever seen on screen. Woman are graphically raped, fingers are severed and heads are decapitated (courtesy of Max's shotgun). Torture and Terror are the currency here! This is a VERY violent movie, well worth its 18 rating (although not fully uncut on DVD). The film culminates in an amazing 15 odd minute chase whereby Max in charge of a massive Mack Truck is pursued by the Humungous and the full force of his army in all manner of deadly pursuit vehicles. The stunt work and special effects (pre CGI) are jaw-dropping and its a miracle no stunt men lost their lives! I have yet to see a more gripping setpiece as the crazed thugs clamber on to the truck from their bikes & cars to engage Max in mortal combat to the explosive conclusion.
This film is tightly written & directed,it looks truly Epic, despite a relativeley modest budget, thanks to stunning photography,sharp editing and cutting edge production design. Performances are effective, and Mel Gibson should never forget his roots! This is action cinema at its best!
Also the score by Brian May is terrific - shades of Holst's Mars - very warlike! The locations are breathtaking (filmed at Broken Hill) and are the uncredited cast member.
Mad Max Beyond Thunderdome was a bit too tame (well made though)and lets hope we see Mad Max 4: Fury Road soon! Please George Miller!!!
Incidentally check YouTube videos out if like me you like Metal - Ive seen a great trailer/montage from Mad Max 2 set to the music of Metallica which works very well indeed!
続きを読む
役に立った
フィードバックを送信中...
フィードバックをお寄せいただきありがとうございます。
申し訳ありませんが、お客様の投票の記録に失敗しました。もう一度試してください。
違反を報告
レビュー を日本語に翻訳する
その他の国際レビューを読み込む

Lee
5つ星のうち5.0 King Of Films as uncut as it gets!
2013年3月2日に英国でレビュー済み
Amazonで購入
there is supposed to be, at last, a fully uncut, restored blu-ray release of all three Mad Max films in 2013. in the mean time, this is the version of Mad Max 2 to buy. it features the proper name on the credits (Mad Max 2, not The Road Warrior) and is as far as i can see and recall the "most uncut" version available.

no extras worth mentioning, but the beautiful print and quality of this magnificent film makes that irrelevant. hopefully the box set will feature some of the "lost" footage for this film and the other two, but in the mean time i would happily suggest buying this and the box set when it comes along.
続きを読む
1人のお客様がこれが役に立ったと考えています
役に立った
フィードバックを送信中...
フィードバックをお寄せいただきありがとうございます。
申し訳ありませんが、お客様の投票の記録に失敗しました。もう一度試してください。
違反を報告
レビュー を日本語に翻訳する

Steve Dilks
5つ星のうち5.0 WHEN MEN AND MOVIES WERE AWESOME!!!
2013年2月21日に英国でレビュー済み
Amazonで購入
A fantastic hell chase of a joyride through cinema that only improves with age. I remember first seeing this as a young teenager. I've viewed it many times since over the course of the years and with each viewing it only seems to get better. The best of an outstanding trilogy that is up there with the Eastwood "Man with no name" movies.
続きを読む
役に立った
フィードバックを送信中...
フィードバックをお寄せいただきありがとうございます。
申し訳ありませんが、お客様の投票の記録に失敗しました。もう一度試してください。
違反を報告
レビュー を日本語に翻訳する