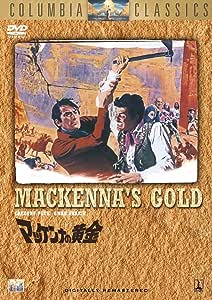 Mr. Paul Watson
5つ星のうち5.0 A good western romp and yarn, with an array of classic stars.
2020年8月19日に英国でレビュー済み
Amazonで購入
Gregory Peck may not be the first name that comes to mind when trying to recall western movie stars, but he holds his own very well in this outing, with multiple characters played by a catalogue of notables. Julie Newmar is one of the most interesting and noteworthy - a lady of stunning looks and fine form. The play off between the Peck and Omar Sharif characters is grand and carries well through to the finish. The effects may be rudimentary, but they work and are enough to make the films story acceptable.
続きを読む
違反を報告
レビュー を日本語に翻訳する

BobH
5つ星のうち4.0 Another flawed epic Western?
2015年5月15日に英国でレビュー済み
Amazonで購入
‘Mackenna's Gold’ (1969) is a challenging western. In many ways it’s a success – action all the way, outstanding locations, often excellent cinematography, first-rate musical score, some fine performances and yet it falls short of 5 stars.
The film has a gigantic scope, with divers groups chasing each other through the rough landscapes of the South-West – how they manage to miss or meet each other on different occasions is but one of the puzzles of the storyline. Would such a group as the bunch from Hadleyburg, ever manage to get together on such a crazy hunt for gold is doubtful? Among them is ‘Old Adams’ (Edward G. Robinson), who’d seen the valley of gold but been blinded by Apaches, so it’s highly unlikely he could have guided such a motley collections. In fact, I suspect they’re there mainly to provide cameo roles for an outstanding collection of stars (many fading!). Then there are the cavalry chasing......... Well, there’s a choice: an outlaw gang led by Colorado (Omar Sharif) who are following Prairie Chief & his map of how to get to the gold; or various bands of Apaches spreading terror. As everyone’s going everywhere it’s a miracle how they manage to track anybody – especially as they contrive an ambush for Colorado’s gang (augmented by the Hadleyburg contingent) leaving Colorado’s ‘secret’ hideout. So exit the cameo roles from Hadleyburg – except that later what’s left of Colorado’s gang manage to witness them being massacred by Apaches. So, as said above, it’s ‘action all the way’. Of course, there’s also the hero, MacKenna (Gregory Peck), who kills Prairie Dog, burns his map and is forced to join Colorado’s gang – and even more unnecessary, Inga (Camilla Sparv), who’s been taken as a hostage by the gang.
Let’s go back to the cavalry. A patrol, led by Sgt. Tibbs (Telly Savalas), is dispatched to pursue the remnants of Colorado’s gang – without an experienced scout they somehow cling on although Tibbs gradually eliminates his men so he can join Colorado’s gold hunt. He’s one of the most outstanding optimists on film in joining alone a gang of five (how could he know two are prisoners?) and thinking he’d emerge alive and rich. The cavalry are left supposedly tracking this gang but they never appear again, though the Apaches do.
So the story is a bit shaky but it’s a great deal of fun. A couple of features, however, were irritating: the characters never seemed to need to reload their guns and there were stupid studio sequences of ‘horse-riding’ against pre-filmed backdrops which were like those used in 1930’s B movies. A great pity as proper sequences with, presumably ‘doubles’, galloping across the desert (on horses which never seemed to tire!) were impressive. The Effects department also do a great job with the final destruction of the valley.
On the whole the acting is good – especially Omar Sharif and the silent Hesh-Ke (Julie Newmar) with her lust-filled menace. Camilla Sparv (as Inga) was a bit disappointing as ‘the girl who got the man’. Savalas and Peck both provide creditable performance though lacking the presence of Ted Cassidy (as Hachita) and his terrifying tomahawk (which seemed to grow smaller once in the hands of Colorado).
In sum, the film is a daft romp but worth 4 stars.

Darth Maciek
5つ星のうち5.0 A violent, deadly, merciless quest for a cursed treasure, hidden in a place always hungry for more souls to corrupt and devour
2014年6月20日に英国でレビュー済み
Amazonで購入
I always liked very much this highly unusual 1969 western with an ensemble cast and recently I was pleased to see that it didn't age AT ALL. Below, more of my impressions, with some limited SPOILERS.

1. The legend of "Lost Adams Diggings".

The scenario for this film was adapted from the novel "MacKenna's Gold", written in 1963 by Heck Allen, a writer and scenarist specialised in Far West stories. This book, describing the search for a cursed treasure in the Wild West, was itself inspired by the legend of "Lost Adams Diggings", which spread in New Mexico in the beginning of XXth century and caused even a mini-gold fever (no gold was ever found).

According to this legend in 1862 a US cavalry patrol found an exausted and half-mad man, a certain Adams, wandering in the desert. Adams claimed that he was the only survivor of a party of miners who found a huge quantity of gold in a hidden place. However, according to him, the Apaches considered this place as a kind of holy shrine and as result killed all his companions - he survived by sheer luck. Still according to the legend, Adams led a search for this place in the 80s, once the Apache Wars ended, but was unable to find it again...

The author of the book kept Adams in the story, but placed the action in the late 1870s, when the "Apacheria" territory was still not settled and therefore it was a very dangerous place for anybody except Apache warriors... He also made Adams into a supporting character, choosing instead as main heroes a brave sheriff and a dangerous desperado. Later, for the needs of the scenario, more changes were made.

The film begins with sheriff Sam MacKenna (Gregory Peck) travelling through New Mexico desert, near the borders of "Apacheria", under the interested eyes of numerous vultures...))) MacKenna is a non-nonsense, down to earth, honest, brave and very noble man, but he is also tough - very VERY TOUGH! He is searching for his old nemesis, an outlaw named Colorado (Omar Shariff, in one of his greatest roles ever), an extremely dangerous thief and murderer.

The character of Colorado was without the slightest doubt influenced by Tuco from "The good, the bad and the ugly", as he is also an extraverted, loud and even cheerful poorly educated guy who has excellent shooting skills and completely lacks scrupules and ethics... The one big difference is that Colorado is kind of handsome and takes as much care of his appearance as the dust of the desert allows it.

Colorado likes to travel lightly, therefore his gang is not very big - but all of those who ride with him are vicious killers. His second in command is Sanchez (Keenan Wynn), a repulsive man who laughs like a mad coyote at every possible occasion, especially when he kills somebody. Three renegade Apaches, expelled from their tribe, are also part of this deadly outfit, including Hachita, a real giant played by Ted Cassidy, an actor mostly remembered for his role of Lurch in "Addams Family" series. Last but not least, there is Hesh-Ke.

Hesh-Ke is played by the sculpturally beautiful, gorgeous actress Julie Newmar, who in the 60s was very much known for her role of Catwoman in "Batman" TV series. Her character is amongst the most interesting in all history of westerns. Hesh-Ke is not mere squaw, she carries a gun and a knife and she knows how to use them - in fact she particularly likes the knife, even if she doesn't mind strangling or drowning people too... She must have had quite a life, as she is mute, disfigured - and absolutely INSANE! However, even if she has a horrible scar on half of her face, she is still an absolutely drop dead gorgeous beauty - and her long legged, six feet tall perfect figure certainly doesn't hurt either!

It is of course unavoidable that MacKenna and Colorado and his gang will meet but because of circumstances which I will not describe here, they will not be able to get into it immediately - instead they will have to travel together for quite a long time... Quite obviously it will be a very difficult moment for everybody involved...

More interesting secondary characters will appear, including Adams himself (played by Edward G. Robinson in person) and a damsel in distress (played by Swedish actress Camilla Sparv), but I will say no more here, other than enumerating the actors who play some of them: Telly Savalas, Eli Wallach, Burgess Meredith and Anthony Quayle as well as Hollywood old timers Lee J. Cobb and Raymond Massey.

3. My impressions about the film.

This is an unusual western, with some fantastic or quasi-fantastic elements included, which made me think by moments of "Raiders of the Lost Ark"... There are also parts of this film which actually seem taken straight from a Jules Verne or Henry Rider Haggard books.

The scenario is excellent and dialogs are very good. The atmosphere of danger grows all the time, the more we approach of the cursed treasure. There are some clever twists. There is an excellent opening song. Characters are less clean and there is more naturalistic violence than in most other American westerns from the 60s as well as some nudity - the influence of the "spaghetti westerns" is clearly visible here. This film is also unusually CRUEL - so be warned!

Bottom line, this is an excellent film, a classic and an absolute must for all amateurs of westerns and of good cinema in general. Enjoy!

JJ
5つ星のうち4.0 Much fodder for the turkey buzzards
2015年1月4日に英国でレビュー済み
Amazonで購入
I have never seen this before and it is an interesting quirky film.
Gregory Peck is the man that can lead the outlaw, Omar Sharif to the gold in a hidden valley. Many have sought this, one or two have found it but it brought them no peace in doing so.
Peck was once a prospector but has given it all up for a fools errand. He sees a map which purports to show the way to the gold but as he has done with that way of life so he burns it. Unfortunately, Omar Sharif was hot on his heels also looking for the map and since Peck looked at it he is dragged along under pain of certain death to show them where it is.
Along the way they encounter various duplicitous often murderous and definitely strange townsfolk and soldiers all greedy for their share of the gold.
Jose Feliciano sings the theme tune.
A strange and interesting film as I said. But recommended nonetheless.
続きを読む
1人のお客様がこれが役に立ったと考えています
違反を報告
レビュー を日本語に翻訳する

Robin
5つ星のうち5.0 My favourite western except ...
2009年1月16日に英国でレビュー済み
Amazonで購入
... well actually my favourite is 'The Outlaw Josie Wales', but this comes in close behind.

I'd agree with the other reviewers who give it 5 stars, but bear in mind it came out long before the Indiana Jones genre so it was something of a first. It was also a welcome break from the stylised western. Making out Indians were nothing but homicidal savages was becoming a no go area by 1969, so here they are honourably protecting their tribal religeous site from marauding treasure hunters. Mexican bandits (a la Magnificent Seven) weren't that uncommon in movies, but Omar Sharif does give us a fun caricature of the 'meester Smeeth' mustachioed Latin.

And the supporting cast is exceptional, many of them having often been major stars themselves. Telly Savalas, Edward G Robinson, our own Anthony Quayle (the film also throws in a couple of English adventurers just in case the other factions aren't enough) and not forgetting Eli Wallach who was also in the aforementioned Magnificent Seven.