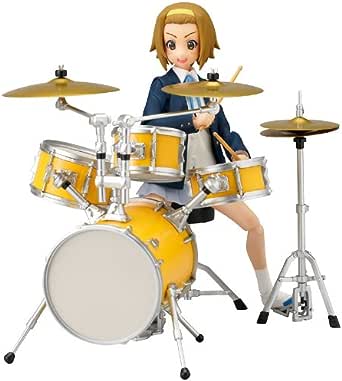 Thomas James Straw
5つ星のうち5.0 High quality Figma.
2014年5月29日に英国でレビュー済み
Amazonで購入
Excellent quality, genuine Figma. Great likeness also. A good purchase for both collecters and K-ON! fans. Be wary of other sites however, as there are alot of fakes out there.
続きを読む
違反を報告
レビュー を日本語に翻訳する

As usual, Ritsu comes with three expressions, one of which goes in a sort of "set" with her other accessories: the bumps she gets when she gets smacked by Mio and a separate hairpiece for them to peg into. This opens up some great posing opportunities, especially with Mio to go along with her, although Mio doesn't have an angry expression to match. She also comes with drumsticks and some specific hands to hold them, as well as her huge, multi-part some-assembly-required drumset. It's fairly easy to put together, even without instructions, and looks GREAT when it's finished. She may be in the back behind the guitarists all the time, but her drumset absolutely makes her stand out. It also comes with a small stool for her to sit on that she fits on perfectly, making it so that she doesn't even need the figma stand when she's drumming.

Ritsu herself has the most unique bodysculpt in that her blazer is open, looking casual as always. It's not a huge difference, but it's a great one that really brings out her character. As usual her articulation is great, her likeness is perfect, and she looks fantastic with the rest of the band. Once again, I 100% recommend this one to fans of the series and music lovers alike.