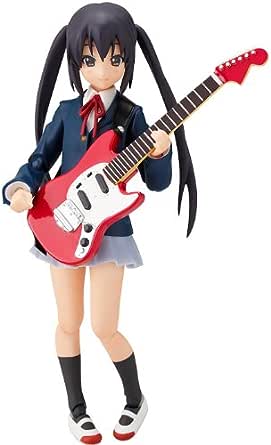 Amazon Customer
5つ星のうち3.0 very cute but should have superglue included
2017年9月22日に英国でレビュー済み
Amazonで購入
I got this figure yesterday and and already 3 things have broken! The ears are broken the stand is broken and the bow on her outfit has a tiny winy little crack in it so may possibly break too if I mess with it . Luckily I have manged to superglue fix the stand and also superglue the ears back together so they look as good as new now though I shouldn't really have had to do that in the first place :/ also I thought the straps were missing for the guitar and guitar case but they are actually just in a weird place (they are under the inside of the box with the instructions) but I have to say now I have fixed everything she is super cute and has so much detail I just have to a bit more careful with her but at least I managed to fix everything and now she looks great (also she's not a bootleg )
続きを読む

Shaun Botham
5つ星のうち4.0 Almost perfect.
2015年7月28日に英国でレビュー済み
Amazonで購入
Arrived super fast, looked great, nicer than in the pictures so can't complain. Not 5 star due to the guitar straps missing. It limits the poses but overall the price you cant complain.
続きを読む
違反を報告
レビュー を日本語に翻訳する

Adam
5つ星のうち5.0 The definitive Azusa figure
2018年3月17日にカナダでレビュー済み
Amazonで購入
Azusa, rhythm guitar and the only underclassman of Hokago Tea Time, is captured perfectly in figma form. She doesn't have any one thing about her that shines more than the rest like Ritsu or Mugi, but she's just all around fantastic.

Being the underclassman she sports the distinctive red bow on her blazer and on the tips of her exchangable indoor shoes, as well as slightly smaller stature than the other four, which is great attention to detail. She comes with three faceplates as usual, with the third being tied to another accessory: the cat ears which earned her her nickname. They also included a set of hands to allow an authentic recreation of her introduction to the club, but I think it's a bit too much stock in a single, albeit iconic, moment. The star of the show, of course, is her Fender Japan Mustang in brilliant red, which looks fantastic, though not quite as nice as Mio or Yui's instruments due to the flatter colour scheme not allowing the paintjob to really shine the way it does with the 3-Tone Sunburst on Mio's bass, for instance.

Azusa by herself looks identical to her on-screen component, even moreso than some of the others. Figma manages to capture the perfect look of a character in a way that a lot of scale or prize figures can't seem to somehow. Her hair is done amazingly and her twintails are on small ball pegs so they can be rotated and moved back and forth to pose them however you like. The articulation is great, as usual and she looks great posed with the rest of the band. Azusa is adorable and she's a must-have for any fan of the series, or even for someone who just thinks she looks cool with her guitar.
続きを読む
違反を報告
レビュー を日本語に翻訳する
すべてのレビューを参照します
同様の商品をご覧になりませんか？ こちらのリンクで参照ください。グッスマ フィギュア
Amazonプライム会員ならお急ぎ便、日時指定便が使い放題
さらに、映画もTV番組も見放題。200万曲が聴き放題 。クラウドに好きなだけ写真も保存可能。
> プライムを無料で試す