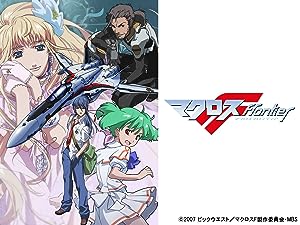 Randall Miyashiro
5つ星のうち5.0 Best out of the three Frontier music releases.
2016年8月25日にアメリカ合衆国でレビュー済み
Amazonで購入
This concert teams up the two singers from Frontier with the composer Yoko Kanno and an band with an orchestra. Easily the best Macross music DVD since the Cosmic Nyan Blu-ray has a few silly Christmas songs and a bonus standard R2 DVD disc that won't play on a US player (Final Budokan's bonus disc is a Blu-ray that plays on US players) and Nyan Clips is very short and is made primarily of recycled visuals from the series. This is indeed a must have if you are a fan of Macross Frontier music.
続きを読む
1人のお客様がこれが役に立ったと考えています
役に立った
フィードバックを送信中...
フィードバックをお寄せいただきありがとうございます。
申し訳ありませんが、お客様の投票の記録に失敗しました。もう一度試してください。
違反を報告
レビュー を日本語に翻訳する

Carlos Masis
5つ星のうち5.0 May'n, Megumi Nakajima, and Yoko Kanno!!
2012年4月18日にアメリカ合衆国でレビュー済み
Amazonで購入
This is an excellent concert starring May'n and Maaya Sakamoto, or Sheryl Nome and Ranka Lee the two main female characters from the newest installment of the Super Dimension Fortress Macross Saga entitled Macross F, or Macross Frontier, and celebrates 25 years of this amazing anime series. It was released on DVD and Blu-Ray disc in November 2009. Yoko Kanno composed the music as she has in the past for Macross Plus and Macross Zero and performs live with May'n and Megumi, there are also appearances by the male main characters voice actors.

If you have had the chance to see Macross Frontier or at least the movies, you have probably been taken by the music. The series has a tremendous sound track, and this concert definitely delivers all the music you love, amazing light-shows, anime background work and a phenomenal performance by May'n, Megumi Nakajima, and Yoko Kanno!

The price is a little steep, but in my opinion totally worth it as you can only find Macross F titles as IMPORT ONLY. Due to issues with the rights, it is doubtful Macross F, its movies, or this concert will be released in other countries.

The run time of the concert in full is 167 minutes on disc one and 63 minutes of other footage on disc two.