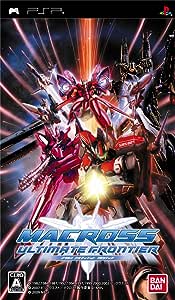 Devilwolf808
5つ星のうち5.0 Macross Ultimate Frontier Japanese Import
2011年11月16日にアメリカ合衆国でレビュー済み
Amazonで購入
This game is amazing! I received it yesterday and only had to put it down for sleep and work since then, lol. Naturally the game language and manual are in Japanese, but after fiddling around in the menu's and during game play, I somewhat figured out how to navigate around. After a brief search online, I found a translated manual and I'm using that alongside my gameplay.

The game has an autosave feature so you don't have to worry about trying to figure out which menu option is the save feature. Another neat feature is that you have the choice to use the games built in music, or disable it to use your own music. One catch though about this feature, you'll have to "buy" that option from the Nyan Shop in order to use it.

As far as the graphics, it looks amazing. Very smooth game flow and the graphics remind me of VF-X2, but the game engine is definitely better. This game also has an RPG-esque feel to it. By that I mean as you complete missions you gain experience and other spending points to upgrade your valkyrie, or choice of vehicle that you are using. You can go as far as choose what type of paint you want your valkyrie to have.

Overall, I am extremely happy with this game, and have found hours of gameplay since receiving it. Much thanks to Made in Japan for their great pricing and expedient shipping.
続きを読む
6人のお客様がこれが役に立ったと考えています
役に立った
フィードバックを送信中...
フィードバックをお寄せいただきありがとうございます。
申し訳ありませんが、お客様の投票の記録に失敗しました。もう一度試してください。
違反を報告
レビュー を日本語に翻訳する