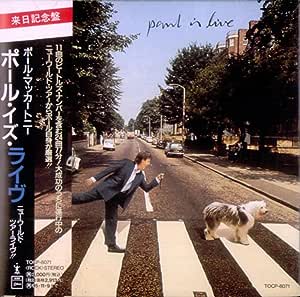 Andy Sweeney
5つ星のうち3.0 Superfluous but enjoyable McCartney live album
2013年7月20日に英国でレビュー済み
Amazonで購入
When "Paul Is Live" was released, back in 1993, it surprised quite a few fans, myself included, seeing as his last live album had only been released three years previously and releasing another so soon after could be considered a little superfluous and inessential. I still bought it, though, on the day it came out, because that's the kind of fan I am. I like to look at it as a supplement to "Tripping The Live Fantastic", covering all of the new additions to his set, including excellent live versions of songs from his then new studio album, "Off The Ground". Fans should make the most of the live renditions of McCartney gems such as "C'mon People" and "Peace In The Neighbourhood" because I doubt if they will ever appear on a live set list of his any day soon, although some committed lobbying by fans saw Paul perform "Hope Of Deliverance" this year, so you never know. Any song that appeared on the "Tripping" release (with the exception of "Live And Let Die") is omitted here to avoid repetition, but a lot of people who had gone to the concerts felt a bit short changed that they weren't getting an entire set from the tour they'd seen.

At the time, I quite liked it and still enjoy listening to it today, but I don't feel as if it is half as good as "Tripping The Live Fantastic" and the fact that the acoustic set here draws heavily from the "Unplugged" session Paul did for MTV back in 1991 makes it sound less fresh than it could have been. In fact, you could argue that not enough of his set had changed to justify a new live album and the very modest sales of this title perhaps support that line of thinking. There are certainly inessential tracks, such as "Robbie's Bit (Thanks Chet)" which, admittedly, is a pleasant bit of acoustic guitar work from Robbie McIntosh, but really, does it belong on a McCartney live album? The inclusion of "Good Rockin' Tonight" and "Kansas City" seem pointless and the sound-check excerpts at the end of the album are very tedious, apart from the reworking of "I Wanna Be Your Man", which shows Macca having a lot of fun with one of his old songs. There are many positives, though, with the first live outings of "Drive My Car", "All My Loving", "Michelle", "Penny Lane", "Paperback Writer" and "Magical Mystery Tour" sounding great and definitely pleasing the fans. One big stumbling block for me is the version of "Lady Madonna" which would have been excellent if not for the screaming keyboard "sax" solo which sounds horribly fake. The keyboards on "Penny Lane" also grate slightly too, sadly.

For some reason, the band as you hear it here ceased to be after this tour, with Paul "Wix" Wickens the only member to feature in his live band thereafter. It's a bit of a shame, as Hamish and Robbie were great side-men, and nobody seems to really know exactly why this is, but after this album came The Beatles Anthology project and, of course, the sad passing of Linda, so perhaps it's not at all surprising that Paul changed many things in his life, including the band that he and Linda last performed with. All parties (or most of them, anyway) moved on to pastures new and it was an unceremonious end for a period of his career that had seen a resurgence in both Paul's popularity and general musical standing, with both of 1993's studio and live album seen as simply "not as good as the last ones". My opinion is that, while there wasn't any great need for this album, it's enjoyable to listen to. It is, however, also probably the most underwhelming live album Macca has ever released and should be one of the very last additions that any fan makes to a Paul McCartney collection.

I. Stuart
5つ星のうち4.0 A great set from a great band
2011年12月31日に英国でレビュー済み
Amazonで購入
I have a particular liking for Pauls early 90s band. They are all seasoned players who tackle material from recent (at the time) albums such as 'Off the ground' with finess. The Beatles songs in contrast are perhaps a little predictable.
I would also take issue with comments regarding the production, animal film etc. Paul is trying to do more than just make another concert film - and personally I think it works.
続きを読む
役に立った
フィードバックを送信中...
フィードバックをお寄せいただきありがとうございます。
申し訳ありませんが、お客様の投票の記録に失敗しました。もう一度試してください。
違反を報告
レビュー を日本語に翻訳する

Butch Detrey
5つ星のうち4.0 Paul sings the Beatles Wings and Solo
2010年8月3日に英国でレビュー済み
Amazonで購入
A great Paul offering covering his varied career. I must add there is terrific track called "Fine Day" which is a warm up song which is well worth a listen.

His voice is in very good form and his band are very professional and drive this live set on with enthusiasm.

Laura
5つ星のうち5.0 Digging to the past McCartney's years to enjoy the present !
2013年8月15日に英国でレビュー済み
Amazonで購入
I confess I got drawn by Paul not more than year and a half, in spite of admiring him forever. So I started to search and collect his work with a guideline: backwards! from present to past years! In my ipod had a setlist that grows every week...! My conclusion for have live performances were that this cd was a perfect intermediate and balanced period of Paul, quite enough after Beatles, quite after Wings, before loosing Linda, and of course the selection of repertoire!!! I wasn't disappointed at all !! On the contrary, was beyond expectations!! Really enjoying it!! Thank you!!
続きを読む
2人のお客様がこれが役に立ったと考えています
役に立った
フィードバックを送信中...
フィードバックをお寄せいただきありがとうございます。
申し訳ありませんが、お客様の投票の記録に失敗しました。もう一度試してください。
違反を報告
レビュー を日本語に翻訳する

Mrs CardiganFetish
5つ星のうち4.0 Paul is Live (thankfully)!! Sic!
2010年8月8日に英国でレビュー済み
Amazonで購入
Paul is as good Live as he is Recorded. Fine album, He does what he says on the tin/sleeve!! Good condition Good Album. I dont think that was Martha the Sheepdog on the Album though i think she would no longer be here but i like the cheekiness of the cover (Even looks like the same suit, but with shoes!!!) BUY!!
続きを読む
3人のお客様がこれが役に立ったと考えています
役に立った
フィードバックを送信中...
フィードバックをお寄せいただきありがとうございます。
申し訳ありませんが、お客様の投票の記録に失敗しました。もう一度試してください。
違反を報告
レビュー を日本語に翻訳する