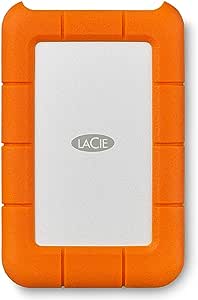 Soybert
5つ星のうち1.0 Beware of this drive
2018年6月20日 - (Amazon.com)
容量: 4TBAmazonで購入
I have several LaCie Rugged drives with different connection ports and use them for travel. All of the previous ones I've owned have worked well, so I was surprised when I received this one and it was a lemon. The reason I purchased it is that the new MacBook Pro only has USB-C ports, so this seemed like a reasonable deal. I have no idea why, but when it mounts on to my MacBook Pro or to my big Mac Pro, it shows that it only has 411MB. I tried following the LaCie setup, as well as formatting with the Mac Disk Utility and it still showed only around 400MB. I tried copying over 2TB of data onto the drive and it produced an error message saying there wasn't enough room on the disk, so it's definitely a problem with the drive. I tried using it in both El Cap as well as High Sierra to no avail. I tried 2 of these drives and they both had the same problem. All of my older drives mount with no issues, so I have no idea why this doesn't work.
続きを読む

Send It
5つ星のうち1.0 Worthless Warranty.
2018年8月13日 - (Amazon.com)
容量: 4TBAmazonで購入
Drive failed at just over 30 days old. Seagate replaced the drive with a "Factory Repaired Drive". We work in video production and would never save a few bucks with a drive that's been repaired. Even if they replaced the disk drive inside, the I/O board & it's connectors have been plugged & unplugged god knows how many times. They could fail tomorrow. I contacted them to request a new replacement & they were helpful at all. They told me that it should be just as good as a new one & that they would repair or replace it if it dies too.

To be fair though we have had over 100 of these drives & mailed them all over the world to transfer data. I've only had 3 of them to ever fail. But, a premium drive should be backed by premium service.

Coastalcamper
5つ星のうち1.0 This isn't just bad. It's REALLY bad and their customer service is even worse than that.
2019年10月5日 - (Amazon.com)
Amazonで購入
This drive stopped working after about six weeks. It stopped mounting. The light on the drive would come on, but nothing else would happen. No internal noise. The drive didn’t and doesn’t appear in the Finder, Disk Utilities, DiskWarrior, TechTools or even in Terminal on my Mac. It’s sat on my desk since I bought it. No drops, no water, nothing. Other USB devices work just fine.

I contacted the manufacturer, Seagate (LaCie is now owned by them). The drive was under warranty and could be replaced by them. They also said, "Data recovery is not covered under the warranty." They gave me a link on the Seagate website (Seagate also runs their included 2 year DataRescue plan). I clicked that link. Here's what that site says:

I'm not in the position to lend Seagate almost $700 to rescue the data from a drive that cost under $200. Yes, I might get some of that back, but the drive lasted only about SIX WEEKS.

Undaunted, I got the box out of the closet and found the brochure about the Data Rescue plan. It also has a link. That website has lots of information about the plan and purchasing the plan. There's nothing about actually using the plan.

UPDATE: After discussions with Amazon, the vendor and Seagate, they didn't charge me the $699 or the $49. They told me that they would recover the disk under the included Data Rescue plan. So, I sent them my disk to be recovered. The sent me back a BLANK DISK.

When I asked Seagate what was going on, they told me that my original disk was still being recovered. Um... I really wish that they'd told me that. Getting a blank disk with no note attached that explained things led me to logically conclude that my files were gone for good. At the very least, Seagate could have emailed me a note that gave a status update. They didn't. I took me writing them, politely letting them know that I wasn't exactly happy, to get updated status information. That disk was the replacement for my crashed disk.

AND WAIT, IT GET'S BETTER: It's now October 4. I purchased it on March 28. They sent me back a drive that arrived today. It supposedly has my recovered files on it. This drive is password protected. The original wasn't. I can't access the files without the password, but did they send it to me? Nope. Once again, I'll have to spend time on the phone and write emails.

It seems like they're really trying hard to blow it every way that they can.

Update: On Saturday, October 5, I sent an email to the CEO of Amazon and the CEO of Seagate about this ongoing saga. I didn't expect to hear from either of them until Monday. Amazon called me within 20 minutes, even though it was a Saturday!!! Amazon was willing to bend over backwards, but the problem clearly is with Seagate. Have I heard from Seagate? Of course not. I'll send them a certified letter in a few days.

October 8, 2 pm: After contacting Seagate yet again via yet another email, they sent me a text and an email with the password. I also got a call from them. Yes, the nightmare is over, but I will NEVER buy another Seagate/LaCie product.

Garrison
5つ星のうち5.0 Solid Drive, Great Speeds
2018年10月19日 - (Amazon.com)
Amazonで購入
I bought this drive because I was looking for something to replace my dated 2TB USB 3 external drive. I needed portable durability with large storage space and great speeds... This external drive give me exactly that! The first thing that I will point out is the durability. This drive comes with a large bumper that goes around the device that helps to protect it from drops and bumps. I love the fact that it has a replaceable cable which is good incase the original cable starts to wear out. It also comes with a USB C to USB A which is good when I need to work on computers that don't have USB C. The main device itself is made completely of metal which gives this drive a nice feel and weight.

I actually have this drive partitioned into three parts and use it a back-up drive, a cross platform drive for windows and Mac, and to put my working files for my various video and photo projects. I can say that I will be stressing this drive out and will be sure to come back and update this review. In terms of speed, this drive does hold up to its proclaimed speeds of 130MB/s. (check images)

If you are looking for a portable drive that is durable and has large storage space this is the drive for you!
続きを読む

Amazn Artist
5つ星のうち5.0 Update!! Mac users read this.
2018年5月8日 - (Amazon.com)
容量: 4TBAmazonで購入
If you have the latest Mac operating system, go to the LaCie website and download the latest software and/or firmware. Unmount and remount, disk format (do this before using it because you erase everything) with the Mac Journaled / GUID type. Fixed it no problem!
Old review because of my software-
{It mounted at 424 mb's of space available. What? However, I own 3 others that are absolute hero's in my office!}
続きを読む
15人のお客様がこれが役に立ったと考えています
レビュー を日本語に翻訳する
Amazon.comのカスタマーレビューを見る(185) 5つ星のうち3.8
Amazonプライム会員ならお急ぎ便、日時指定便が使い放題
さらに、映画もTV番組も見放題。200万曲が聴き放題 。クラウドに好きなだけ写真も保存可能。
> プライムを無料で試す