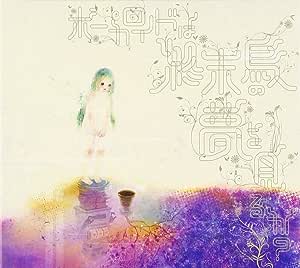 Gage Williams
5つ星のうち5.0 A hidden gem from sasakure.UK
2016年6月28日にアメリカ合衆国でレビュー済み
Amazonで購入
Put simply, I was more than impressed by the album. I came in expecting an album full of things like "*Hello, Planet" primarily focusing on cheery chiptune. What impressed me most was the range demonstrated by sasakure.UK, dipping from upbeat chiptune, to "Fragile Phoenix" with light jazz, to atmospheric (almost experimental?) in "Campanella"...there's a much bigger variety than I was expecting, but it manages it without ever straying from his style of composition.

"Do Vocaloids Dream of Doomsday Bird?" is a vastly under-appreciated entry in the vocaloid community. Or at least, I think so. Music taste is subjective and all, but I believe the scope and execution of the album are nothing short of excellent.

The entire product (aside from the disks themselves, of course) is made of a heavy-duty paper that doesn't feel cheap. It's prone to damage if not stored properly, but otherwise I don't think there's much risk of doing any significant damage in storage. I've got a small fold crease on the outer sleeve from being a bit too reckless in opening it, so be careful when handling it.

To close, I genuinely think this is a diamond in the rough, so to speak. More than recommended to existing fans of vocaloid productions and other sasakure.UK songs. For people unfamiliar with the genre, I'd recommend this album to chiptune fans who aren't averse to a bit of experimentation.
続きを読む
2人のお客様がこれが役に立ったと考えています
違反を報告
レビュー を日本語に翻訳する
すべてのレビューを参照します
Amazonプライム会員ならお急ぎ便、日時指定便が使い放題
さらに、映画もTV番組も見放題。200万曲が聴き放題 。クラウドに好きなだけ写真も保存可能。
> プライムを無料で試す