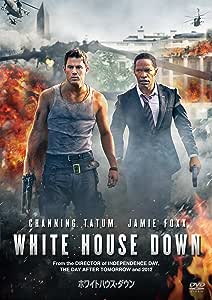 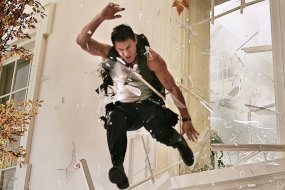 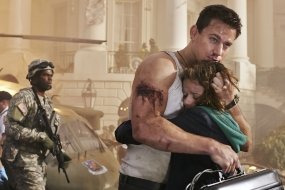 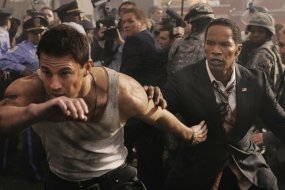 Paul_ABZ
5つ星のうち4.0 Cheesy 80s/90s big-budget one-man-army style film.
2015年12月18日に英国でレビュー済み
Amazonで購入
It’s easy to confuse this with Olympus has Fallen, but in a duel for the oval office this one wins hands-down, mostly due to the entertainment-factor; it’s the true embodiment of the term ‘action romp’. Everything that can do so, explodes during big set pieces that punctuate the movie, and is generously littered with laughs too – by the end I was even guilty of a few fist-pumps.

I’d go as far as saying that it’s the kind of movie that – at least on paper – we should all hate: big, loud, dumb, derivative, but the director seems to know this, and fully embraces it – cheesing everything up to 11. The only real downside is that it’s a tad on the long side (for the kind of film it is). If you want a cheesy 80s/90s big-budget one-man-army taking on waves of despicable henchmen, look no further.

rbmusicman/and/movie-fan'
5つ星のうち4.0 'SEEM'S A TOUGH WAY TO GET A JOB-OFFER'
2014年1月21日に英国でレビュー済み
Amazonで購入
Not for the first time, two film studios made Movies with a similar
theme.
Personally I quite enjoyed 'Olympus has Fallen' with 'Gerard Butler'
This film is brought to us by the director 'Roland Emmerick' who
brought us the visually spectacular movies such as...'INDEPENDENCE
DAY'....'THE DAY AFTER TOMORROW'....and...'2012'
'John Cale' goes to the 'White House' for an interview to join the
security staff there, he takes his young daughter 'Emily' along to
enjoy the experience of the surroundings.
He's turned down, he and his daughter join a White House tour that
is just about to start, before the tour is completed a 'paramilitary'
group posing as workmen have smuggled in an explosive device along
with an array of weaponry, things soon kick off.
'Cale's' first instinct is keep his daughter safe, but events move
fast he soon becomes a key player in trying to ensure 'President
James Sawyer's' safety.
Retiring Chief of Security 'Walker' is running the show....he has
a purpose in mind....if things don't go the way he intends and the
authorities don't follow instructions....the sixty one hostages die,
along with the President (if they can find him that is)
Explosive action throughout as all-hell breaks loose in and around
the White House'
As one would expect there is an impressive array of special-effects
to cherish.
Great picture and sound quality throughout.
(can honestly say, I enjoyed both this and the 'Gerard Butler' movie)
5/5 for entertainment value.
Special features:-
*A dynamite duo' - 'Tatum Channing' and 'Jamie Foxx'
*Man of action -'Stunt training'
*Meet the Insiders - 'Supporting cast'
*Roland Emmerick' - 'Upping the ante'
Plus : exclusive to Blu-Ray extras including:
*The ever popular - 'Gag Reel'
* The inside story - From script to screen'
* The Beast - 'Inside the president's limo'
* The full arsenal - 'Guns, Grenades, Tanks, and Choppers'
* Presidential treatment - 'A mission production'
* Crushing the oval office - 'Special effects breakdown'
* Drowning the Beast'
* Recreating the White House.
* VFX - 'Boundaries Down'
* Lights, camera, heart-pounding-action.
続きを読む
1人のお客様がこれが役に立ったと考えています
違反を報告
レビュー を日本語に翻訳する

Miss Maisie J
5つ星のうち5.0 I loved this movie
2014年7月30日に英国でレビュー済み
Amazonで購入
I loved this movie, as a huge DVD buff I tend to go by what I think and feel, you'll never please everyone no matter what you do. I bought this with no hesitation and I enjoyed it from the start to the finish, no only is there lots of action (obviously) but there are some very good comedy moments that make it well worth watching. Put it on and settle down for a movie to take your mind off of everything else, That's what I like about this film, I've watched it several times and it just helps you have that time watching but not worrying or thinking on everything else you have to do, you get caught up in the stories entwined within. So sit back and enjoy the show.
続きを読む
2人のお客様がこれが役に立ったと考えています
違反を報告
レビュー を日本語に翻訳する

Robyn B. Mcgorm
5つ星のうち5.0 What a movie
2014年3月22日に英国でレビュー済み
Amazonで購入
Now this could and should have been better as I was very disappointed with it, Channing should not have taken the role of the girls father as this seem to kill it, maybe as a security guard right from the beginning would seem to be better. Maybe as the president would have suited him even better. Magic Mike was a fabulous movie and he suited that far better. Olympus has fallen had more action and intake that left this one for dead. Channing is a good actor and did play his part well as the other cast but the story was great and there was something lacking right from the start please no offense as it's only my opinion. I still recommend this to others who have there own views, Washington falls to the bad guys by men that are suppose to be good security guards. Most of the president's staff are killed and it looks as if the bad guys are winning for a change. There's always someone to botch up the job isn't there. I rated this an A grade, worth looking into for a night in with feet up relaxing with your popcorn for something different. Enjoy!
続きを読む
違反を報告
レビュー を日本語に翻訳する

Mr. R. W. Graham
5つ星のうち4.0 Typical. You wait ages for a terrorrist to attack the White House film then 2 come along at once!
2014年2月4日に英国でレビュー済み
Amazonで購入
Policeman John Cale is at the White House for a job interview as secret service agent which he doesn't get. Later he takes his daughter on a tour of the White House when it is attacked by terrorrists lead by a traitor in the White House and Cale must get the President to safety. A daft but very entertaining action film with a good cast. Channing Tatum and Jamie Foxx make an unlikely buddy buddy act as Cale and the President and the rest of the cast Maggie Gyllenhaal, James Woods, Jason Clarke and Richard Jenkins are all good. Say what you like about director Roland Emmerrich's films but he always knows how to put a good cast together and this is no exception. Very silly complete nonsense but a lot of fun with good action scenes and performances and simmilar to Olympus Has Fallen.
続きを読む
違反を報告
レビュー を日本語に翻訳する
すべてのレビューを参照します
Amazonプライム会員ならお急ぎ便、日時指定便が使い放題
さらに、映画もTV番組も見放題。200万曲が聴き放題 。クラウドに好きなだけ写真も保存可能。
> プライムを無料で試す