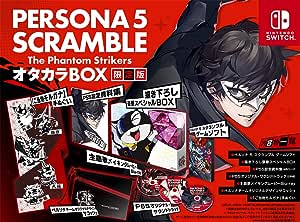 フェネック
5つ星のうち5.0 An Amazing Persona 5 Spinoff
2020年3月1日に日本でレビュー済み
機種・種類: オタカラBOXエディション: Amazon限定無しAmazonで購入
Persona 5 Scramble The Phantom Strikers is an truly awesome experience, the game is an action RPG that is a mix of Persona 5 and the Musou games, the game follows the story of the Protagonist otherwise known as Joker or Ren Amamiya who comes back to Tokyo after six months of his absence to meet up with his friends to go on a road trip but is forced to dawn the mask of the Phantom Thief once again, the combat is very fun and intuitive, you can play as characters such as Joker, Mona, Skull, Panther, Fox, Queen, Noir and two new additions to the Phantom Thiefs Wolf and Sophie, all these playable characters have different move sets that accurately reflect their abilities from Persona 5, this is an awesome spinoff that truly captures the essence of Persona 5 perfectly.
The オタカラBOX is great as it is very high quality, it includes the game, an art book which is thinner than expected but awesome nonetheless (it has story spoilers inside), two CDs with the soundtrack which is one of the best in the series, a blue ray disc with a movie which shows how the game was made, a high quality fabric poster with little Morgana icons reflecting locations of the game and a small bag although I don't know what it's for but I can confirm that the Nintendo Switch won't fit in it with the Joy-cons attached it's great nonetheless.
A Truly great Game as well as an amazing オタカラBOX!