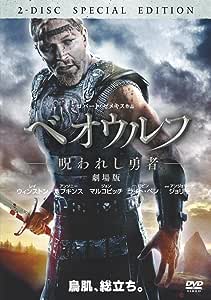 Nicholas Casley
5つ星のうち5.0 Trepidations Dispelled
2013年2月13日に英国でレビュー済み
Amazonで購入
With the cinematic success of `The Lord of the Rings' I suppose it would not be long before `Beowulf' also received the Hollywood motion-picture treatment, especially since Tolkien had mined the Anglo-Saxon poem `Beowulf' as one of his major sources. I therefore approached the screening with some trepidation.

I remember the exact moment in the cinema when my scepticism about the film I was about to watch was dispelled. It occurred six minutes into the film, when the camera pulls back from Hrothgar's hall through the snow-covered fields that surround it. The pull-back then continues further out again across the river; then even further out through a forest; the pull-back continues onwards and outwards, higher and higher until we reach Grendel's cave.

That extended well-framed, perfectly paced, pull-back convinced me that considerable thought had been given to interpreting the `Beowulf' poem, and from then on I was completely engrossed by the world offered to me on screen, ably assisted by Alan Silvestri's fine score. It soon became clear that this was not just another Hollywood hatchet-job. It IS still a hatchet-job of sorts, but one with meaning and good intentions.

Problems arise from the very start when we are told that the setting is `Denmark AD507', which is `a little' too early for my liking. Changes and additions have been made to the dialogue, and some fundamental changes have been made to the storyline. The screenwriters - Neil Gaiman and Roger Avary - argue that this is for the better in that it makes the narrative more coherent. And I am tempted to agree with them.

They have fleshed out the roles of Wealthow and Unferth, but the most radical change is to imply that Hrothgar slept with Grendel's mother, thus spawning the beast whose eardrums are so sensitive. In the poem, of course, Beowulf entered her lair via a lake, but here her home is the same as Grendel's, albeit a lake is found within the cave.

The second radical change is Hrothgar committing suicide after naming Beowulf as his heir, which allows the story to remain within the one landscape, so that the dragon (who is explicitly the son of Beowulf and Grendel's mother, a third major modification) haunts the same land as Grendel rather than ravaging the country of Beowulf's homeland, as the original poem has it. As already mentioned, these changes make for a more cohesive narrative, turning the poem's three acts into one linked tale that is beautifully, brilliantly, and imaginatively produced (though purists will no doubt be horrified).

But at heart this cinematic interpretation of `Beowulf' remains true to its original telling. Some of the violence is excessively gruesome, but is no doubt included to appeal to a certain kind of teenage mentality. A linked but more healthy kind of teenage mentality is appealed to by the garb (or rather, lack of garb) and portrayal of Grendel's mother by Angelina Jolie. But it's a shame that the final dragon flight and fight becomes wholly contrived and mere entertainment.

In terms of production design, full marks for imaginative responses, such as the roof of Grendel's cave being formed of the inside of a giant's ribcage. But to portray Jutland as a land of mountains will disappoint a lot of tourists looking for an original `Beowulf' experience. And to have Hrothgar's hall and Beowulf's later city constructed in stone with towers and other architectural ornamentation is to place sixth-century Danish civilisation five hundred years ahead of its time.

The motion-capture method of filming for which director Robert Zemeckis has become renowned works. Andrew Osmond, writing in `Sight & Sound' wrote how "'Beowulf' often feels like live-action with special effects, rather than computer animation." At least it makes a portly Ray Winstone look more like a youthful Sean Bean. It's a shame that the actors all maintain their own distinctive accents, but we are compensated by the amusement experienced watching the lengths the film goes to ensure Beowulf's private parts remain hidden.

This is a review of the two-disc director's cut edition. The second disc has a twenty-five minute `Making of', in which Zemeckis openly states that his film focuses on the more physical aspects of the tale - the food, the drink, the fighting, and the sex. We also learn how the motion-capture technique - not dependent on light, weather, etc - means that he can shoot in forty minutes what would have normally taken a whole day.

Other extras include a series of short films "mapping the journey" from poem to film, and the screenwriters explain why they made the changes they did for the sake of dramatic unity. There is much too on the film's artwork and the design of the creatures. Finally, there are seven additional scenes (in basic form), lasting twelve minutes.
続きを読む
7人のお客様がこれが役に立ったと考えています
違反を報告
レビュー を日本語に翻訳する

Dr Jacques COULARDEAU
5つ星のうち4.0 Beowulf is not a post modern electronic game
2009年7月20日に英国でレビュー済み
Amazonで購入
Beowulf is a magical piece of literature. And it's a good idea to keep some of the Anglo-Saxon original text. The director tries all he can to make the setting and costumes and psyche of these people realistic for the fifth and sixth centuries after Christ when Denmark was still believing in the Nordic Gods, Odin first of all, and before the arrival of Christianity at the beginning, after its arrival at the end. Interesting too to change the tale slightly to make the two half into one logic, the second half being the sequence of the first. Interesting too to use the magic of these old days and hence have some supernatural beings and events. It is true Grendel, his mother and the dragon were supernatural alright. But instead of making explicit the references to the giants and pre-human species surviving in total exclusion, instead of making explicit the reference to the runes brought to human beings by Odin himself, the director chooses a sexual line, from beginning to end. Then the monster is the son of the local Danish king and the mother who does not have a name but is a gorgeous woman disguising some kind of witch, a sorceress who has little difficulty mesmerizing the local king with promises of power into providing her with a son who will eventually be the scourge of the country and will have to be killed. Hence Grendel is the "son" of the local king when Beowulf arrives in Denmark and the dragon will be the "son" of Beowulf himself. He will kill Grendel, then tame the mother by giving her a son, and finally kill that very son, the dragon. This addition kills something in the tale. Beowulf is the obvious Christianization of traditional Nordic tales and sagas in Anglo-Saxon territory in the seventh to ninth centuries. This is present in the film, but the sexual dimension of these monsters goes against this Christianization since it states that every generation will have to live under the menace of a monster produced by the fornication of the previous king with the supernatural woman, as if such pagan facts could survive in front of the Christian faith. This rewriting of the tale is thus for a modern audience, what's more for a young audience. This is quite clear in the electronic and computer game conception of the fights. And this young audience does not care for all these religious things, including Christianity, and they can very easily imagine Christ having dinner with a dragon and being served by some unicorn. Dropping that dimension of believing and even faith that the saga originally had transforms the story into some kind of post-modern fantasy for a world that does not believe in anything and where believing has been transformed into some kind of personal private matter whereas it was a public communion with the whole society through its common rites and fears and hopes. Then the end of the film is the promise of a third monster, whereas the end of the saga was a final stop to the existence of all monsters.

David Garside
5つ星のうち5.0 As it should be seen
2018年6月28日に英国でレビュー済み
Amazonで購入
Absolutely brilliant in 3d.This is a single disc version but has plenty of extras on it in 2d.A word of warning I haven't checked yet but packaging says that the disc only compatible with 3d blu ray players,but since you buying this for the 3d version shouldn't be a problem.
続きを読む
違反を報告
レビュー を日本語に翻訳する

D. Durling
5つ星のうち2.0 not arf bad
2008年9月16日に英国でレビュー済み
Amazonで購入
I watched the directors cut version of this film, having recently read the Heaney translation of the original story.

The film shows superb CGI, and the extras showing how the film was made are well worth watching. The animation does give the film a slightly fairy tale feel which is in keeping with the story, that is flesh eating monsers and fire breathing dragons.

However, the film is disappointing for a number of reasons, many of which have been mentioned by others. The voices are at times very strange, veering from Welsh to bad Slavonic to genuine Anglo-Saxon. I didn't have a problem with the Anglo-Saxon parts, which seemed to me added an authenticity. The Beowulf voice, while strangely cockney at first, had an edge to it that was believable in a warrior. Some animation is just very poor, especially in the action sequences. It is too Shrek-like in places, but then alternates with realism, for example Grendel's mother is eye-poppingly real.

But perhaps the big letdown for me is in the authenticity of the interpretation. Zemakis is on the DVD as stating that he found the original boring when he was forced to read it in high school, and his dislike shows in the film. Hollywood has a need to fill the 50 year gap in the middle of the story, so has invented a new tale about Grendel's mother. In doing so, and in compromising the hero with seduction and avarice, the director has ignorantly wiped away the social codes, the valour, and the high bearing of the original hero, and thus completely destroys the feeling of that time. Beowulf did not behave in this way, and there are much more subtle and ethical messages in the original.

This is a missed opportunity to do something significant with a classic, but it is tainted by a dumb Hollywood imperative that has produced just another action movie. Read the book, the pictures are better.
続きを読む
1人のお客様がこれが役に立ったと考えています
違反を報告
レビュー を日本語に翻訳する