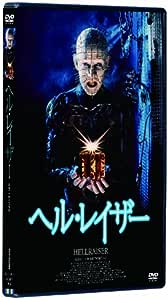 Alice Dobie
5つ星のうち5.0 Hellraiser 1987 DVD review .
2019年7月2日に英国でレビュー済み
Amazonで購入
I wanted too say I am a massive horror fan and I have seen some of the Hellraiser movies I have seen Hellraiser Inferno the first one I saw which came out in 2000 that was about a shady police detective someone with a wife and child who comes across the box in Hellraiser then enters a world of sadistic pain and murder too make it clear Hellraiser was the first Slash horror before the noughties Saw and Hostel , well one of the 80’s first in a era full of it mid seventies late 1970’s and early 80’s Friday the 13th and Nightmare on Elm street and the followed on 1978’s Halloween , and 1974 Texas Chainsaw , Massacre anyway back to Hellraiser the story begins in Morocco where a man called Frank states his highest prize for a puzzle box from a dealer when he tries too solve the puzzle horrifying chains appear which cut his face and tear him apart later the room is filled with swinging chains , and covered with the remnants of his body afterwards a couple move in the house a man called Larry and his wife Julia too try and save their marriage Julia who had a affair with Frank shortly after her wedding too Larry , soon after moving in they discover that the house is quiet filthy and find maggots near a ashtray as found by Julia and a unkempt bed , too say what happens soon as far as I will say Julia discovers Frank upstairs in the attic after Larry Cuts his hand blood goes through the floor which then resurrects Franks Body, a living skeleton as Julia discovers she then realised she still has feelings, she then tries too kill people who she innocently summons to the attic she does this too try and rescue the skin of Franks by giving him body flash , what else’s happens is a rather full on painful ending for Julia and what follows on is a rather pleasing sadistic painful horror ride not for the squeamish, or those who faint at blood I found myself as someone who prefers the clever yet rather violent when needed writing of orphan with the clever and realistic understanding that a couple who have lost a child would adopt a believed rather troubled nine Year old Hellraiser began with all the makings of a rather great horror movie the frightening consequences of opening a box and the nightmares of the coenobites, the rather chilling voice of Pinhead the opening words ‘’It will tear Your Soul apart ‘’ I will say I have seen many Horror movies about six Halloween movies as well well seven and eight and the latest one not four but this is a Gem if You love clever horror with a great story and puzzling mystery too it , rather game form similar too saw the villain Hellraiser is terrifying and ‘’will Tear Your Soul Apart ‘’a Classic 1980’s horror gem one I am glad too add to my DVD horror collection .
続きを読む
1人のお客様がこれが役に立ったと考えています
違反を報告
レビュー を日本語に翻訳する

Capability Darwin
5つ星のうち4.0 You called, we came.
2019年11月1日に英国でレビュー済み
Amazonで購入
Good movie in its day, but does look dated compared to today’s standards. Not too many scenes involving the Cenobites, but I think that illustrates how the formula for horror has changed since it’s creation. Films of this era had more build up and relied upon implied horror. The storyline is a tad confusing - set in England but pretty much everyone has an American accent - including the removal men! This is one of the original horror breed that could benefit from a good reboot. Blu-ray transfer is good and overall this is definitely worth adding to your collection if you come from the video tape generation as I do.
続きを読む
2人のお客様がこれが役に立ったと考えています
違反を報告
レビュー を日本語に翻訳する

Amazon Customer
5つ星のうち4.0 Clive's Angels
2012年11月7日に英国でレビュー済み
Amazonで購入
Hellraiser is an unabashed horror film with demons, monsters, torment and strange things in the attic. Clive Barker is as macabre a storyteller in his way as Edgar Allan Poe. His work writhes with a dark imagination and there's no doubting its genre; this is true horror, not torture porn, not stalk 'n' slash, just pure, gruesome strangeness.
Barker's plot is crisp and economic: Frank (Sean Chapman) buys a puzzle box from one of those stock Oriental characters who sell strange objects, and on solving it is sucked into a world run by sadistic demons, called Cenobites. He somehow escapes them to become residue in his attic floor. The house is now owned by his brother Larry (Andrew Robinson) and Larry's wife Julia (Claire Higgins). Julia had an affair with Frank when he was human, and after Larry cuts himself blood spills on Frank's resting ground, partly giving him form. Frank and Julia then conspire to bring men upstairs, kill and let Frank drain them until he can gain a body. Also around is Larry's daughter Kirsty (Ashley Laurence) who'll have her own encounter with the Cenobites.
This is a very gory film; the special effects sometimes reminded me of those in John Carpenter's The Thing. There's a lot of hooks through skin, crawling skeletons and flayed bodies which look like cadavers; these images are naturally disgusting, but they're crafted with imagination. The Cenobites' world is a grim visual place which manifests itself with some neat visuals, and their violence is delightfully weird. They're fun to look at too. Though he's featured on the poster and DVD cover "Pinhead", as he's known by fans, is a fairly minor character. He's never named or explained in this film, but we sense his leadership. I may be wrong, but I think he's the only Cenobite who speaks. There's also one who looks like H. R. Giger's alien from the Ridley Scott film.
Kirsty's a good heroine. Unlike some she isn't a cliched nice girl; she shows signs of independence and sexuality. Claire Higgins, meanwhile, looks great as Julia, despite her 80s wardrobe. None of the human characters have much psychological depth, but they're sharply and effectively drawn. This DVD comes with interviews in which Higgins almost makes a feminist point about Julia that amused me, because the character came across as a weak and selfish slut. Nonetheless, hers and Frank's misadventures will enthrall many genre fans; to quote Stephen King: "I have seen the future of horror and his name is Clive Barker".

Elwyn Roberts
5つ星のうち5.0 An adult horror fairytale with amazing imagination.
2016年4月12日に英国でレビュー済み
Amazonで購入
Clive Barker's unique artistry fuels his first big screen debut. Ashley Lawrence is the innocent drawn into a deadly web by Clare Higgins's Julia, who is in full sexual bloom in her tryst with a vampiric Uncle Frank. Wonderful physical special effects and a real sense of poetry connecting all the threads from beginning to end.
続きを読む
2人のお客様がこれが役に立ったと考えています
違反を報告
レビュー を日本語に翻訳する