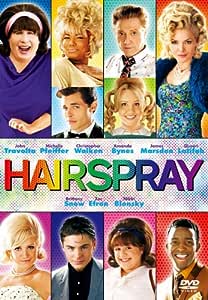 daedal
5つ星のうち5.0 Good all round family entertainment, plus John Travolta as a female makes it a great film to watch
2016年1月27日に英国でレビュー済み
Amazonで購入
If you haven't seen the original version don't worry you don't need to. If you have then at least you know the basics of how the film goes.

"It's rare that a movie captures the intensity and excitement of a live Broadway musical production while appealing to a broader movie-going audience, but the 2007 Hairspray is an energetic, powerfully moving film that does just that. A re-make of the 1988 musical film Hairspray the new Hairspray is a film adaptation of the 2002 Broadway musical and features more likeable characters than the original film and an incredible energy that stems from a great cast, fabulous new music, and the influence of musical producer Craig Zadan. What remains constant throughout all three versions of Hairspray is the story's thought-provoking exploration of prejudice and racism. Set in Baltimore in 1962, the film opens with chubby girl Tracy Turnblad (Nikki Blonsky) singing her heart out in a rendition of "Good Morning Baltimore" that, while admittedly a bit too long, sets the farcical tone for the film."

I think the above statement gives you a good idea of what the actual film is about, but there is so much more than just a musical about prejudice and racism.

For one you have John Travolta playing Tracy Turnblad's mother, yes you read right, John Travolta is dressed up like a women, talks like a women, in fact is a women all through this movie, and he does it very well. That for me was enough to make this film worth watching.

If you are a fan of musicals you are bound to love this as well, its good a story that can easily stand the test of time, even though humanity has moved on from the prejudice of the 60's films like this are still an effective reminder even if done in a comical musical way.

Zac Efron plays his part well, but then this wasn't long on from his High School Musical days so he was still in the 'teen musical' frame of actorship. James Marsden also plays his role well as the presenter of the TV show at the centre of all controversy. That's not all you have the likes of Michelle Pfeiffer playing the evil TV station boss that is obviously racist and dislikes Tracy Turnblad immensely she going out of her way to make sure things don't go how they should.

The dancing, acting and singing, just make this whole movie a fun one to watch with all the family. Look out for some cameos roles from people that was in the previous version of this film. Some of the songs are the same or similar as the previous version, but enough new stuff, and a completely different take, make this different enough to be classed as difference.
続きを読む
5人のお客様がこれが役に立ったと考えています
役に立った
フィードバックを送信中...
フィードバックをお寄せいただきありがとうございます。
申し訳ありませんが、お客様の投票の記録に失敗しました。もう一度試してください。
違反を報告
レビュー を日本語に翻訳する

Dogbite Dave
5つ星のうち3.0 Entertaining
2017年1月3日に英国でレビュー済み
Amazonで購入
I bought this DVD at the marvellous cost of just one (1) penny plus postage, as a used Item through an Amazon seller.

It was delivered very quickly.

The film is done in a musical format. Some very well known film stars. Some, at the time, unknowns that have since become
reasonably well known through long term roles in TV series such as The White House and others.

John Travolta just has to be seen as an obese mother.

The music, whilst not as memorable as the likes of that in Grease is entertaining.

R. Szikra
5つ星のうち5.0 Grease has a strong contender in Hairspray
2008年9月5日に英国でレビュー済み
Amazonで購入
All the hype when it was at the cinema. Hailed as the new Grease. It just didn't appeal to me. No musical could possibly beat Grease and it would be so overrated. So when I saw it at my local supermarket for cheap I thought i'd give it a try and I almost kicked myself after watching it. Not for spending money on it but for not seeing it on the big screen. The songs are so beautifully sung by a magnificent cast and so catchy you just want to sing along and be apart of it. I immediately ordered the soundtrack when it finished. Nikki Blonsky was cast perfectly as Tracy Turnblad and Zac Efron (I don't usually like him in HSM but he won me round in this) was the right choice of Link. John Travolta also had me laughing in every one of his scenes as Edna and never fails in my eyes to give the performance of his life no matter what he starring in. The scene with him and Christopher Walken singing 'you're timeless to me' was done brilliantly.

The film is moving with a storyline about acceptance from being overweight to black and portrays everyone as equal no matter what walk of life they're from. A movie that is superb from the storyline to the music. I think Grease had better watch out because this film has just overtook it in my book as the best musical of all time. I'm about on my 10th time of watching it and I only bought it a few weeks back. If you see it and you have some spare money, BUY IT. It really is that good!!!
続きを読む
23人のお客様がこれが役に立ったと考えています
役に立った
フィードバックを送信中...
フィードバックをお寄せいただきありがとうございます。
申し訳ありませんが、お客様の投票の記録に失敗しました。もう一度試してください。
違反を報告
レビュー を日本語に翻訳する

Amazon Customer
5つ星のうち5.0 My nephew found it very useful for his play!
2018年10月17日に英国でレビュー済み
Amazonで購入
My nephew was up for a part in Hairspray at school!
He got a lead part so this DVD has helped him a great deal!
He was also word perfect for his audition!
I'm not familiar with it but I think he was Troy?
続きを読む
1人のお客様がこれが役に立ったと考えています
役に立った
フィードバックを送信中...
フィードバックをお寄せいただきありがとうございます。
申し訳ありませんが、お客様の投票の記録に失敗しました。もう一度試してください。
違反を報告
レビュー を日本語に翻訳する

A Howard
5つ星のうち5.0 Travolta in a frock - nuff said
2013年7月6日に英国でレビュー済み
Amazonで購入
I truly loved this film. My copy of the dvd was a little quiet it has to be said and we needed to have the volume on full blast to actually hear it clearly, but that is a small price to pay to see such quality actors making complete goofs of themselves.

I mean the fabulous Christopher Walken is a revelation as the supportive dad and his comic timing is superb. John Travolta as the mum - well words fail me. He's great!

If I'm honest though - the star of the whole film is Queen Latifah. She steals every scene she's in whether she means to or not, her singing voice is out of this world (I'd never actually heard her sing before).

Alison Jennings is also a scene stealer and anyone who watched her in American Beauty or West Wing - is in for a hell of a shock!

K. J. Noyes
5つ星のうち5.0 You just try not to tap your toes to this!
2013年9月10日に英国でレビュー済み
Amazonで購入
It's almost impossible.

Joyously daft and upbeat, a very different prospect to the original film.

Songs that require repeated watching, likeable characters in the 60s segregated setting, a daytime dancing TV show and John Travolta in a dress.

A tubby teen, Tracey Turnblad dreams of being a dancer on the Corny Collins show, and gets her chance to audition. Can she get the cute boy to notice her? Can she help make Corny's Negro Day more than once a month?

Four Violets
5つ星のうち5.0 Exuberant!
2011年10月18日に英国でレビュー済み
Amazonで購入
How I managed not to realise this was a musical when I ordered it, I don't know; but it was thoroughly enjoyable, exuberant and entertaining. The entire cast were brilliant, and I couldn't take my eyes off John Travolta as Tracy Turnblad's mother, although at times I found him rather difficult to understand. It's also very funny, with some wonderful characters and a brilliant - if tongue in cheek - recreation of the early 60's. There are themes around acceptance of people's differences, size and colour amongst them, but it's all pretty lighthearted.
続きを読む
1人のお客様がこれが役に立ったと考えています
役に立った
フィードバックを送信中...
フィードバックをお寄せいただきありがとうございます。
申し訳ありませんが、お客様の投票の記録に失敗しました。もう一度試してください。
違反を報告
レビュー を日本語に翻訳する

DCheyside
5つ星のうち5.0 My daughter's happy
2014年2月11日に英国でレビュー済み
Amazonで購入
I bought this for my daughter and watched it with my head shaking. I was expecting some more High School Musical / Grease dirge but I was pleasantly surprised. Yes I do know the storyline is pure Hollywood but there is enough to keep it moving along and carrying you along to. I'm not saying I'll rush to watch it again soon but I don't regret watching it once.
PS. Don't tell my daughter I gave it 5 stars - 1 was from me the other 4 are from her.
続きを読む
1人のお客様がこれが役に立ったと考えています
役に立った
フィードバックを送信中...
フィードバックをお寄せいただきありがとうございます。
申し訳ありませんが、お客様の投票の記録に失敗しました。もう一度試してください。
違反を報告
レビュー を日本語に翻訳する
その他の国際レビューを読み込む

BrommerD
5つ星のうち5.0 Everyone's invited!
2008年1月27日に英国でレビュー済み
Amazonで購入
This is a great film. I haven't seen the original so I can't make comparisons but I was surprised at how well crafted this version was. I bought it for my daughter (at her request) for Christmas but only got around to watching it myself yesterday and found it totally engaging and an excellent family film. Having grown up with Grease and Saturday Night Fever I was expecting to be disappointed but this is up to the same high standard. It evokes the sentiment of the time and the importance of inclusiveness brilliantly. It's a joyous experience and the soundtrack is excellent in its own right. Make every day negro day!
続きを読む
2人のお客様がこれが役に立ったと考えています
役に立った
フィードバックを送信中...
フィードバックをお寄せいただきありがとうございます。
申し訳ありませんが、お客様の投票の記録に失敗しました。もう一度試してください。
違反を報告
レビュー を日本語に翻訳する