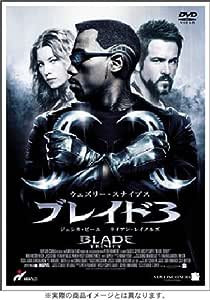 jane hart
5つ星のうち3.0 Ok for a night in but not a masterpiece
2016年7月26日に英国でレビュー済み
Amazonで購入
I went into this movie feeling slightly wary because of all the negative things I've heard about it from other people and they do have reason to hate it. The action isn't bad but feels a little boring compared to the previous movies. The characters of Hannibal King (Ryan Reynolds) and Danica Talos (Parker Posey) really annoyed me. Hannibal King is supposed to be a Nightstalker but he proves useless in his fight scenes and spends most of the movie being injured or captured. His dialogue was also pretty stupid, one perfect example being 'I'm sorry, I've had too much sugar today'. Meanwhile Danica Talos is just an overgrown brat who has tantrums when things don't go her way and has a stupid fashion sense, that includes her hair styles, particularly the one she wears in the third act. In fact all of Talos' minions annoyed me. One of my favorite things about the Blade franchise is that the vampires are actually scary but Trinity's vampires are far from it, especially the vampire dogs, which is really disappointing. The treatment of Dracula is also a let down. When I first saw him in human form, I felt a little disappointed. The choice to use the daddy of all vampires was a great one but calling him 'Drake' is stupid. I didn't feel like he posed much of a threat. He came across like a white, full vampire version of Blade. Blade is a great character but there's no need to have two of him in the same movie. David S. Goyer wrote all three of the Blade films but I don't understand where he's gone wrong with Trinity as he did a great job with the previous two movies. I hated the decision to kill of Whistler (Kris Kristofferson) very early on in the movie. It would have been interesting to see him interact with his daughter Abigail (Jessica Biel) who was actually a great character, far more badass than King. She is actually capable of taking down vampires on her own, as proved in the train station sequence, but she isn't completely cold hearted at the same time. Wesley Snipes continues to prove he was well cast as Blade but his performance reflected the off screen feud he had with the movie which is sad. Blade's attitude in this film is basically just 'i don't give a shit anymore, as long as i get to kill vampires' which is a shame. Overall, I agree that Trinity is definitely the worst of the Blade trilogy but while it does have a lot of faults, it's not as bad as most people make it out to be.
続きを読む
3人のお客様がこれが役に立ったと考えています
役に立った
フィードバックを送信中...
フィードバックをお寄せいただきありがとうございます。
申し訳ありませんが、お客様の投票の記録に失敗しました。もう一度試してください。
違反を報告
レビュー を日本語に翻訳する

LindaA
5つ星のうち4.0 Blade
2018年6月16日に英国でレビュー済み
Amazonで購入
Wesley Snipes is Blade . In real life if this were true Wesley Snipes would be Blade . I love him in this role . Great film . Never thought I would ever say this though , as I love Ryan Reynolds but he just doesn't fit in this film . He just seems out of place at all times . Domonic Purcell was great as Drake looking big and powerful , very believable . The old washed out greyish/white vampires look great , especially coming through the sewer . I wouldn't want to meet one and as I watched it I thought it must be quite creepy for the actors to be acting face to face with one . I'm not a big fan of Kris Kristofferson but he was really good also . His character adding to the film . Jessica Biel arrow shooting was superb and sexy and Parker Posey made a very attractive female vampire , would have liked to see her in it more as I enjoyed her character . All in all great film as are all the Blade films . I also enjoyed the bonus content of how the film was made , interesting to watch . I've knocked one star off because the Ryan Reynolds character did spoil it for me .
続きを読む
役に立った
フィードバックを送信中...
フィードバックをお寄せいただきありがとうございます。
申し訳ありませんが、お客様の投票の記録に失敗しました。もう一度試してください。
違反を報告
レビュー を日本語に翻訳する

Su
5つ星のうち4.0 National Lampoon does Blade ... sort of
2009年11月4日に英国でレビュー済み
Amazonで購入
I liked Blade when I saw that, I thought that the sequel Blade II was a little disappointing, this is the third film in the group and I was concerned when this appeared in the DVD player - I needn't have been as I thoroughly enjoyed it.

Blade Trinity is lighter than the original Blade film, the comedy provided by Ryan Reynolds as the character Hannibal King. This comedy played well for me, most of the time. I do think that the comedy worked to a certain extent, but there are times that there seemed too many smart-alecky remarks in some areas.

The film makers decided to bring in the original vampire, Dracula (now called Drake and played by Dominic Purcell, the mean and moody brother from  Prison Break . Turns out that Drac, oops sorry Drake, is also a day-walker. The modern vampires think that they can use Drake to create a new bread of vampire - they have already been experimenting on animals.

The new bread are predominately played well. Parker Posey is great fun as the scene stealing evil vamp Danica Talos, unfortunately we don't see much of the underrated Callum Keith Rennie ( Harper's Island , Battlestar Galactica ) who plays her brother Asher Talos. One of the new breed I thought struggled was Paul Levesque who played Jarko Grimwood - I was told that he is wrestler (and son-in-law of the boss) Triple H, which probably explains why he seemed out of his depth at times - yet he did an adequate job, he was just out shone by those around him.

The fight scenes are amazing - there is a debate at the moment as to whether or not they were filmed and then speeded up.

There are problems with the film, for example, was it truly necessary for one character to shout "Hannibal King" when he jumps through the window? It was one of those unfortunate, unnecessary, unbelievable, cringe making moments.

There is also a noticeable reduction of the role of Blade in this film. This film was meant to be a starting point for a new film and TV series about the Night Stalkers - neither film nor TV series has ever come to fruition, which is a bit of a shame really as I would have liked to have seen a Night Stalker series.

The script was changed a number of times, much to the annoyance of lead actor Wesley Snipes. This included increasing the part of wrestler Triple H, who originally had only a couple of lines. It is well known that Wesley Snipes and the film makers had a number of bust-ups during the making of the film, this is one of the reasons given for the reduction in Blade's role.

Disc one contains a choice of the theatrical version or the extended version (having now watched both the extended version is much more fulfilling than the theatrical version). Also included are 2 commentaries - one with David Goyer (writer, Director and Producer), Ryan Reynolds and Jessica Biel; the other has David Goyer, Producers Peter Frankfurt and Lynn Harris, the cinematographer, production designer and film editor.

There are a plethora of extras on the second disc, mini documentaries, making of mini films, outtakes, alternative endings, etc.

Michael-t
5つ星のうち5.0 Snipes at his best
2017年10月9日に英国でレビュー済み
Amazonで購入
I am a great fan of Wesley Snipes so I knew this was going to be good and I was not mistaken. I really enjoyed it. If you haven' watched any of the blade films there is 3 in all, you don't know what you are missing.
続きを読む
役に立った
フィードバックを送信中...
フィードバックをお寄せいただきありがとうございます。
申し訳ありませんが、お客様の投票の記録に失敗しました。もう一度試してください。
違反を報告
レビュー を日本語に翻訳する

Amazon Customer
5つ星のうち2.0 Scratched
2016年8月26日に英国でレビュー済み
Amazonで購入
I'd bought all three of the blade films which were meant to be new, but all three of the discs came scratched. Only realised a few days ago when I'd gone to watch one, it's not the first time, I've also had another disc which was meant to be brand new come scratched but that was due to it not being placed into the case properly.
続きを読む
1人のお客様がこれが役に立ったと考えています
役に立った
フィードバックを送信中...
フィードバックをお寄せいただきありがとうございます。
申し訳ありませんが、お客様の投票の記録に失敗しました。もう一度試してください。
違反を報告
レビュー を日本語に翻訳する

Geoffrey Graham Cunliffe
5つ星のうち5.0 Bielsbow
2016年5月5日に英国でレビュー済み
Amazonで購入
Super film mainly because of Jessica Biel and her archery. She was just perfect, her acting, agility and beauty I found perfect. Wesley was also great as were the rest of the cast. I don't like horror movies generally but this is the exception.
続きを読む
役に立った
フィードバックを送信中...
フィードバックをお寄せいただきありがとうございます。
申し訳ありませんが、お客様の投票の記録に失敗しました。もう一度試してください。
違反を報告
レビュー を日本語に翻訳する