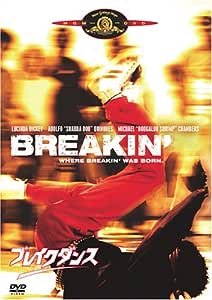 NicE
5つ星のうち5.0 Brought back childhood memories
2019年8月22日に英国でレビュー済み
Amazonで購入
Loved this as a kid. Me and my mate thought we could do the moves. We couldn’t. We do still break out a couple of the moves when we’ve had a few or if we hear ain’t nobody or there’s no stopin us but we look like a pair of idiots so we probably shouldn’t. The plots a bit thin but it’s the dancing and music that you are watching this for. And the minor appearance of jean Claude van damme in his Lycra!
続きを読む
2人のお客様がこれが役に立ったと考えています
違反を報告
レビュー を日本語に翻訳する

The Honest Cynic
5つ星のうち3.0 It's as bad and good as you remember
2020年7月3日に英国でレビュー済み
Amazonで購入
Part of me wishes iconic 80s movies were as good as you remember, before I remember I wasn't born in the early 80s. Yes, Breakdance aka Breakin' is a classic movie, but the wear and tear is evident. It's terrible. And while critically we can have a go at the dance movie for its corny and campy aesthetic, culturally this is a very important movie in both dance and electro music. Less a blockbuster, more a cultural appreciation of early breaking and electro. A must-see if you're into the culture!
続きを読む
違反を報告
レビュー を日本語に翻訳する

Amazon Customer
5つ星のうち5.0 The Original Breakdancing Movie!
2009年4月27日に英国でレビュー済み
Amazonで購入
Cast your mind back to the eighties... Were you one of those kids who ruined your new windcheater trying to spin on your back?? Or nearly broke your neck attempting a head-spin?? If so, this film's for you!!

It's a feel-good movie (suitable for all ages) about two street dancers - Ozone & Turbo - teaming up with a professional dancer - Kelly aka Special K - who enter a formal dance competition, hoping to win the strait-laced judges over with their fresh new street style.

Okay, so there's no Oscar worthy performances to speak of and if you look closely, you can tell that budget and time scales were tight. But... WHO CARES!

Breakdancing has made a major comeback in recent years and I'll be the first to admit that the routines the youngsters are churning out these days are a lot more polished and dynamic than they used to be. But this film is a classic example of how it was back in the day, when kids used to walk around with their boom boxes and their mats, ready to get down at any given opportunity.

Even after all these years, I still enjoy all of the dance scenes, my favourite being the 1st Radiotron clash, closely followed by the rehearsal in the dance studio, before the big competition. Turbo definitely steals the show throughout the movie.

If after watching Breakdance, you're not humming one of the tunes from its excellent soundtrack and/or you don't find yourself standing in front of the mirror to see if you can still pull off at least one of those old moves, I'd be very surprised.

With a decent enough storyline and elements of humour, as well as a message of endurance and hope, you could do a lot worse than having this classic film as part of your DVD collection.

John Taylor
5つ星のうち5.0 Bar 'NONE' the best Poppin/Stand -Up film Yet!
2014年2月18日に英国でレビュー済み
Amazonで購入
Not only does this film bring back memories because it was the 1st 'Breakin' film i ever saw at the age of 14(perfect age for starting to get into a new lifestyle) but my first thought's when seeing this film still ring true!:-If there are better Popper's /Ticker's /Bobber's /Waver's/Animation /Glider's Or Robotic Type Dancer's out there?!Then i'd have to test them to see if there Human! Lol.Yip,Salah's Good etc,etc,but these guy's didn't learn from anyone,they invented as they went!That's the difference. If you Love It!,Like it!,or just a passing interest,bye, bye, bye It!!
続きを読む
1人のお客様がこれが役に立ったと考えています
違反を報告
レビュー を日本語に翻訳する

This film reminds me of my childhood in the 1980's. We use to practice some of the movies in the school playground when the film showcased on TV.