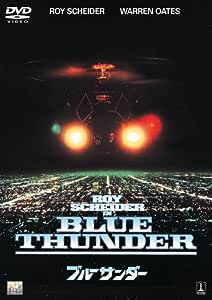 A good action thriller which still holds up today with all the CCTV and Internet surveillance in today's world will leave you to ask which side you are on.
続きを読む
違反を報告
レビュー を日本語に翻訳する

Trevor Willsmer
5つ星のうち4.0 One of the most enjoyable action films of the 80s
2012年4月25日に英国でレビュー済み
Amazonで購入
The 80s was the golden age of action movies, and Blue Thunder still holds up as one of the most enjoyable. Part of a Summer double whammy from director John Badham that also saw him scoring a big hit with WarGames, it's another piece of paranoia turned into slick entertainment as Roy Scheider's Vietnam vet with a bad case of flashbackitis (otherwise known as Clint Eastwood Firefoxitis) gets reassigned from flying police choppers to testing out a new crowd control weapon - the heavily armed state of the art helicopter of the title. With 1984 literally just around the corner and fully equipped with computer-controlled gun systems, high-tech listening devices that can hear a mouse fart at 2000 feet and infrared cameras that see through walls, it's clearly intended for more than just crowd control at the Los Angeles Olympics, which isn't exactly a surprise since Malcolm McDowell's old wartime adversary is behind the program.

Naturally Scheider uncovers their real, albeit vaguely defined dastardly plot and uses the weapon against them, with some especially spectacular results as helicopters duel over the city in scenes that are all the more impressive for being done largely for real. No CGi here and surprisingly few model shots too, just terrific stunt work excitingly edited. The Blue Thunder itself is a striking creation, first seen blotting out the rising sun like a malignant insect, the film clearly enjoying showing off its tricks and firepower as much as it pays lip-service to abhorring its purpose. The plotting may be rudimentary and the characters one step up from cardboard, but the film manages to sell them effectively enough to never quite allow them to be completely overshadowed by the hardware thanks to solid performances, with particularly good supporting turns from Daniel Stern as Scheider's rookie observer and a wonderful swansong from Warren Oates as his eloquently sarcastic boss (the film, co-produced by The Wild Bunch's Phil Feldman, even has a rather sweet dedication to him `for all the joy you gave us').

It did inspire a dismal short-lived TV series that missed the point of the film and turned the Blue Thunder into a `good guy,' though the film itself was changed substantially from Dan Jakoby and Dan O'Bannon's original script. Closer to Taxi Driver with multi-million dollar firepower, that saw Scheider's psychotic character genuinely going crazy and shooting up the city, but the studio wanted the destruction without the high body count of innocent bystanders - it's one of the finished film's absurdities that for all the destruction only the villain gets hurt - turning him circuitously into the film's hero instead, borrowing more than a few plot points from the previous year's Firefox along the way while thankfully improving on Eastwood's film. The rather decent documentary on the special edition DVD AND Blu-ray goes into that in surprisingly frank detail, with O'Bannon even talking about the commercial reasons for his taking first billing on a screenplay largely written by Jakoby - with Alien just released and O'Bannon too ill to work full time, they could get a better deal with his name first. It's certainly a lot more informative than the vintage 1983 puff piece for the film that's also included and which has unfortunately been letterboxed from its original fullframe. The DVD special edition also includes three storyboard sequences that aren't on the Blu-ray, while the Blu-ray includes the original theatrical trailer, which isn't on the DVD special edition but was on the otherwise barebones original DVD release.

Unfortunately the picture quality on Columbia's special edition DVD isn't any visible improvement over their earlier issue, with the same rather light blacks and limited depth: it's an acceptable widescreen transfer, but if it weren't for the new extras it wouldn't be worth the effort. However, the Blu-ray is a distinct step up in quality.
続きを読む
15人のお客様がこれが役に立ったと考えています
違反を報告
レビュー を日本語に翻訳する

Philip B. Davison
5つ星のうち5.0 This has always been a favourite
2013年11月16日に英国でレビュー済み
Amazonで購入
This has always been a favourite of mine, I liked Roy Scheider as an actor and he turns in a brilliant performance, it could have been lost so easily by being overplayed but he doesn't and you believe it. The helicopter is believable and the extras are fabulous, never seen them before.