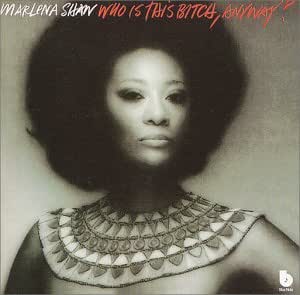 Alex H
5つ星のうち4.0 This Is A *Gorgeous* On-Demand CD!
2010年8月12日にアメリカ合衆国でレビュー済み
Amazonで購入
I'm new to the music of Marlena Shaw, but I had to find out more about her after hearing the live version of "Woman Of The Ghetto" on the radio. That led me to this CD and the catchy title WHO IS THIS BITCH, ANYWAY?

Unfortunately there weren't any samples to listen to, unless you want to track down some of the songs on Amazon's MP3 page, so I was taking a chance. And I have to say that I'm not disappointed at all!

The CD is a good mix of lush jazzy ballads and up-tempo, gritty songs--all of which will have you groovin'--and Marlena's voice is vibrant, strong, and pitch perfect. Why she isn't a household name is really hard to reconcile. I guess it takes much more than talent and charisma to become a star because Shaw has enough of both.

Though the entire CD is strong here are some stand-out tracks for me:

"Street Walkin' Woman" is a 6:23-minute song with about 3-minutes of dialogue at the beginning. The dialogue is funny as a guy tries to use pick-up lines on Shaw, in character as a "lady of the evening," and then it launches into the ultra-funky song with its hard hitting rhythm section.

"You Taught Me How To Speak In Love" is a gorgeous love song that should've been a hit single.

"The Lord Giveth And The Lord Taketh Away" a 01:09-minute ditty that sounds like an impromptu warm-up session and Shaw takes us to church. According to the liner notes, this gospel tinged song was written by Shaw and she accompanies herself at the piano . I don't know why it was so short or why it fades out, which is why I suspect it was a spontaneous type of song done at a jam session.

The entire CD is great and the CD-R format offered by Amazon is pretty good. This is one of two CDs I've bought, the other being Shaw's Live At Montreux: Marlena Shaw, which are on-demand, licensed copies of original works that are out-of-print. I don't have the original, so I don't know how faithfully it has been reproduced, but WHO IS THIS BITCH, ANYWAY CD looks professionally done.

There's cover art and liner notes by Shaw, and the CD itself has "Blue Note," album title, credits, and track listing on a semi-gloss label.

One-star deduction for stereo separation on some tracks. Again, I'm not sure if this was present in the original album but on some songs like "Davy" and "You Been Away Too Long" they sound almost ethereal. Music and voice blend almost at the same level and so I find it hard to distinguish some of the lyrics. However, it's not bad nor does it interfere with the enjoyment of listening to the CD. It's just noticeable especially when compared to other tracks that don't have that mix/blend.

If you'd like more of an intro to this dynamic songstress try and find Anthology from a used/third party seller, which would be cheaper. That's a great CD and covers more of Shaw's recordings.
続きを読む
5人のお客様がこれが役に立ったと考えています
役に立った
フィードバックを送信中...
フィードバックをお寄せいただきありがとうございます。
申し訳ありませんが、お客様の投票の記録に失敗しました。もう一度試してください。
違反を報告
レビュー を日本語に翻訳する

Linda Johnson
5つ星のうち5.0 Fantastic, soulful music!
2013年12月29日にアメリカ合衆国でレビュー済み
Amazonで購入
I heard Marlena Shaw while in college and fell in love with her music and her style. I was very pleased to be able to purchase the CD and to listen to the music, the love and the passion that this woman exhibits. Memories!!!
続きを読む
2人のお客様がこれが役に立ったと考えています
役に立った
フィードバックを送信中...
フィードバックをお寄せいただきありがとうございます。
申し訳ありませんが、お客様の投票の記録に失敗しました。もう一度試してください。
違反を報告
レビュー を日本語に翻訳する
その他の国際レビューを読み込む