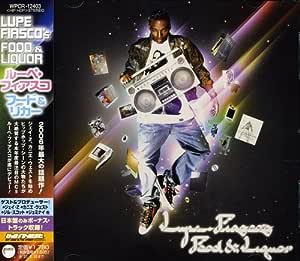 When I got my advance copy I didn't know what to expect because I had already heard so many of the leaked records, it was interesting to see what songs didn't make the final cut (Lupe The Killer, Happy Industries, and the alternate version of Kick Push II among others). However what did make the cut is a treasure trove of real hip hop music. Lupe goes completely left and touches on topics no other MC has come even close to doing in recent years. Standout tracks include, well the whole thing! See this is one of the few complete cds that you can put on and just leave on. 'He Say She Say', 'Sunshine', and 'The Cool' all show Lupe's storytelling skills brightly. 'American Terrorist' is excellent and if released will surely get people talking. `The Instrumental' is hot and highlights Lupe's lyrical skills well. 'Hurt Me Soul' is a great introspective track and again like nothing any hip hop MC has released in a while.

The production is on point, guests appearances limited but certainly talented, so if you don't have it, go get it and tell a friend!

1. I believe this album is dangerously pushing "overrated" status.
2. Just because you do something different than other radio friendly artist for the masses doesn't necessarly make you the best (i.e. not rhyming about cars and dancing). Lupe hasn't done nor said anything new that I haven't already heard before.

Anyway Lupe Fiasco's debut "Food & Liquor" is one of the good albums that came out in 2006. After having the album bootleged during the spring, he comes out with the album about 4 months later. He gives us a good amount of head nodding tracks to satisfy many hip hop fans. The single "I Gotcha" is one of the dope tracks because of the dance type beat produced by the Neptunes. He can pull some good lyrics in a few songs like on "Real" that I'm feeling. "Sunshine" the love song is another good song with good rhymes ("I think I live her like a metaphor, it's hard to get") My favorite track would be "Daydreaming" with Jill Scott, becasue it caries a nice beat and her singing blends in perfectly in the song. And the soulful song "He Say, She Say" is another great track. What I like about Lupe Fiasco is that he speaks his mind and talks about life, something that is becomming a rarity in hip hop nowadays, as it shows on the song "Hurt Me Soul".

Production is good for the most part also. As mentioned earlier "Daydreaming" has awesome production. The Neptunes produced "Sunshine" is a good one also. The 1st and 15th Crew does a good job also.

Guest wise is okay. Jay-Z drops a decent verse on the song "Pressure" which was a good addition since it wasn't on the bootleged version in the spring. Pharell sings on "Sunshine" and does a okay job. Jill Scott does the hook to "Daydreamin".

What prevents this from being a 4.5 or 5 star album you might ask? Let me tell you. Has anyone actually sat down and listened to this CD? If you did, you'd notice that most of Lupe's rhymes makes absolutely no sense. Like the song "Kick, Push" for instance. I have absolutely no idea what he is talking about, and thought it was about ice skating, but I was later told it was an ode to skate boarding. Don't get me wrong, his lyrics are tight in many songs, but on the album together, he's inconsistant. Don't believe me, sit down and listen to this again and your opinion might change. "Pressure" is also a miss, because it's lackluster rhymes and it's one of those songs that seems to have lost me, ("It's hella proper/sag so low you can see boxer/like a boxers "). Production is lackluster, like on the song "American Terrorist" although Lupe does an excellent job rhyiming. Also I believe that the "Outro" could have been shorter since it clocks in over nine minutes.

Overall, a good debut. Lupe proves that he can carry his own here on this album. The obvious problem is that his lyrics needs to be tweeked up for future releases. I'm glad that his album was able to be released since it was bootleged, unlike other albums (maybe he got lucky). Lupe has picked up momentum now in the hip hop game, lets just hope that he holds on to it for years to come.

Depening on where you purchased this, you got 3 extra tracks: "Tilted", "Clara Lu" and another "Outro". Those songs are great too, but there is a reason why these are bonus tracks.

Lyrics: B+
Production: B+
Guest Appearances: B+
Musical Vibes: A-
Overall: B+

J. Rawlins
5つ星のうち5.0 This is something you MUST do for yourself...
2006年9月21日 - (Amazon.com)
形式: CD
Lupe Fiasco is a breath of fresh air!!! The long anticipated album Food & Liquor is finally here and it does not disappoint. I was one of the unfortunate souls who did not get my hands on the bootleg when it dropped but I'm happy I waited.

The album flows smoothly as Lupe tells tales of hope, despair, sorrow, and triumph. From the opening track, Real, Lupe sets the tone of the album, letting us know that he is here to deliver something Real. I could not agree any more as his effortless slow flow prepares us for a journey that we have not taken on a rap CD in years.

With limited features, Jay-Z being the only other MC on the album (i thought he could have come harder with his verse), Lupe proves that he can stand on his own two and carry an entire album. The majority of the production is provided by his camp, The 1st and 15th crew, and they give Lupe the perfect score for the visual escapade he carries the listener through.

Additional production is provided by Mike Shinoda, Pharrell, Needlz, and Kanye. The Needlz track is my personal favorite as Lupe displays rhyme skills far beyond anyone else this year (no disrespect Weezy) on the standout track "Hurt Me Soul". I won't even comment on this song any further; listen to it yourself and you'll understand why Lupe is the truth. The story track, "The Cool", produced by Kanye is a highlight also as Lupe tells a story of resurrection and life after death when you're living in hell.

I think I've said enough for you to know what you're dealing with. The one thing I didnt like was the cover art but hey, you can't judge a CD by the case! Go out and buy two copies of this CD because I barely scratched the surface of how hot this record is. Save a copy for home and a copy for the car. If you don't have a car, give a copy to a friend and spread the good word. Each one, teach one. One love to Lupe, thanks for holding me down for the rest of 2006 with this amazing CD.